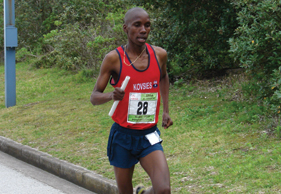 The University of the Free State’s (UFS) athletics club has been quietly going about its business since it was founded in 1921. In their 90 year existence the club has produced many a national champion and the odd barefoot sweetheart, with a total of 60 athletes representing South Africa. But what makes their athletics team stand out is not the amount of trophies in their trophy case or their medal tally at various championships. It’s the camaraderie, loyalty and tradition that have become synonymous with Kovsies.

HISTORY
Athletics is one of the oldest sports to be presented at UFS and throughout the years they have built a proud record of producing top athletes. The first Kovsies to represent South Africa internationally were sprinter Billy Legg and shot put and discuss thrower Harry Hart. They both represented the country at the Olympic Games in 1928 and 1932 respectively.

Up until the seventies Kovsies didn’t perform as well as they would have liked, but that changed with the arrival of legendary coach late Ivor Potgieter in 1976. Ivor coached the national team for several years, managed several top flight athletes and was appointed chairman of the Free State Amateur Athletics Association as well as vice chairperson of the South African Amateur Athletics Union during his time at UFS. He took the club’s crop of coaches at that stage under his wing and it was under his guidance that Kaai Preller, Hennie Pretorius, Div Lamprecht, Abrie de Swardt, Jopie van der Walt and Leon Botha developed into the top class coaches they are today. Kaai is still involved with the club to this day and have since been joined by Ans Botha, Andr? van Heever, Van Zyl Naude and Nico Nicolaisen. Currently Kaai, Ans, DB Prinsloo, Sarina Cronj?, Frans Human, Johan Human, Kennie Jooste and Sidney van Biljon form a formidable coaching team, all of them having coached athletes who represented the South African team at some stage.

ALUMNI OF NOTE
In 1980 the university became the proud owners of their own athletics centre when the Carl Preller Athletics Centre was completed. The seventies, eighties and nineties can be seen as the club’s heydays when a young Zola Budd (Pieterse) burst onto the scene but she was by no means the only quality athlete to hail from Bloemfontein. Sarina Cronj? (middle and long distances, late Jaco Reinach, Hendrik Smit (both middle distances), Sandra Barnard, Elinda Vorster, Ansie Basson and Johan Rossouw (all sprinters) all excelled during this time and some of them are still ranked in the top 20 of their respective events. Sarina also held five national records in the 800m, 1 500m, mile, 3 000m and 10km road race events. More recently the most successful Kovsie athletes were long distance and cross country runners Hendrik Thukwane, Enoch Skosana, Madele Naude, Sandra L?tter, Jurgens Kotz?, Stephen Phofi, Anton Nicolaisen, Georgina Fourie, walker Barry Badenhorst, and world champion and Olympic medallist Frantz Kruger (discus and shot put).

YOUNG KOVSIES
Currently the university can boast with some exciting talent in the form of Boy Soke (half marathon), PC Beneke (400m and 400m hurdles), Windy Jonas, Johan Cronj?, Ratlale Mokone, Dan?l Prinsloo, Rynardt van Rensburg (all middle distances), Marionette van der Merwe (heptathlon), Thuso Mpuang (100m, 200m), Janette Siebert, JVA Steytler (high jump) and Marizette Badenhorst (hammer throw). They are especially excited about Thuso’s participation at the IAAF World Championships later this month and all Kovsies will definitely be supporting him from a cold Bloemfontein when he gives his all in Daegu.

The UFS have ended fourth at the USSA Championships in the last two years and even though they did not win as many medals this year as in 2010 they are confident that they will be able to build on this year’s performance in 2012. Of their team of 49 athletes, 14 were first year students and with another year of experience and training chances are that UFS will feature on the podium at next year’s USSA’s.

According to the university’s Director of Sport, DB Prinsloo and Athletics Officer, Sarina Cronj? sport at UFS is still one of the cornerstones on which the development of students is built. DB says it is through quality coaching, facilities and competitions that Kovsie athletes have the opportunity to develop their talents and excel in their discipline. It is not all about the elite athletes though and the university has been presenting an inter-residence cross country league since 1975 and an inter-residence athletics league since 1980. These events still take place till this day and have helped identify many unknown talents throughout the years.