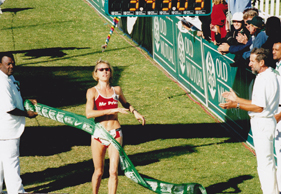 Gwen van Lingen still looks as trim and fit as she did in her peak competitive years, despite having just arrived in her 40s and recently having a second baby. She’s also still as driven and focussed in her athletic career, which saw her travel all over the world and garner many accolades, including a gold medal and three silvers in the African Champs in 1992 and 1993, followed by her greatest medal performance, winning 1500m bronze at the 1994 Commonwealth Games. A year later she made the final of the World Champs 5000m, then went to the 1996 Olympics and made the final of the 1500m.

That same year she ran in the World Cross-country Champs, having won the 1995 national title the previous year. Then she moved to the road and claimed the SA Half Marathon title in 1998, followed by three consecutive SA Marathon titles from 1999 to 2001, to bring her total of national titles to nine, ranging from 1500m to the marathon. And then came second, fourth, first and second places respectively in the 1999 to 2002 Old Mutual Two Oceans ultras, with her win in 2001 the last by a South African woman.

CAREER WOMAN
Next she set her sights on the 2001 Comrades, but she never made it to the Big C start line. “I caught chicken pox just before the race, and then I was pregnant with my daughter, Faith, in 2002. I actually kept running till the day before she was born, and started running again just 10 days later, but maybe tried too hard after that and battled with injuries. I still ran a 2:56 marathon six months after her birth, but then I pulled a calf muscle and kept hurting it again. I had been working for Mr Price Sport from nine to three each day while running professionally, but after Faith arrived, I decided to go work full-time and concentrate on my career. It was actually an easy decision, because I felt I had done everything as an athlete.”

Today, Gwen (nee van Rensburg, then Griffiths from her first marriage) is the Head of Marketing for eyewear specialists Luxotica South Africa, based in Cape Town, where she looks after 19 different brands, including Oakley. She recently moved to the Mother City when Luxotica bought out her previous employer Oakley SA, and chiropractor husband Lawrence joined a local practice. Despite a hectic work schedule, Gwen says she still manages to fit running in. “I try to get in 40 to 60 minutes per day, and I can still comfortably run 30km at four minutes per kay, so I really believe I can run another sub-2:40 marathon and get top 10 at Oceans, although 2012 might be too soon, so maybe in 2013.”

SURROGATE MOM
The reason Gwen says she needs more time is because of her recent pregnancy. “Friends of ours couldn’t have a child, so I said I would be a surrogate mom for them. I was artificially inseminated and gave birth to Sebastian in November last year. He’s a beautiful child and it was really a privilege to carry a child for somebody else, although it was still very hard to give him up after I’d held him. Now I see him two to three times a year, and his mother sends me pics every two to three weeks.”

The only downside to the pregnancy, says Gwen, was that she put on a lot more weight than with Faith, because she had to have hormone treatment that started three months before the insemination procedure, and continued three months into the pregnancy. “There’s a lot of extra stuff when you carry somebody else’s child, and I gained 7kg, so now I’m slowly getting back to fitness.”

RUNNING PASSION
Born and raised in Durban, Gwen began running in primary school. Aged 13, she fell in love with the middle distances after winning an 800m race by more than 200 metres! A first half marathon followed when she was 16, in a blistering time of 1:15:30, which still stands as the SA Junior record. “I always loved the road, but then I ran 16:15 for 5000m on the track and secured a scholarship to go study in the USA, so I went back to the track while studying Physical Education and Health at Western Kentucky.”

A spell working in London followed, but then in 1991 she headed back to South Africa when the country was readmitted to international sport. “My coach said I should think about the Olympics after I made my first SA team in 1991. In 1992, I qualified for the Barcelona Olympics in the 3000m, but the selectors went for Zola Pieterse because she had qualified first. She then withdrew because of a liver disorder, so they called me up, but my paperwork had not been done properly and I couldn’t go. I was so disappointed, because I was the best 3000m runner in South Africa that year – I had followed Zola all over Europe to show the selectors I could beat her, which I did every time.”

FREAK ACCIDENT
Gwen was even more determined to go to the 1996 Atlanta Games and qualified in the 5000m, but a freak accident saw her miss her first heat and be eliminated. “It had been raining heavily, so they put boards on some of the wet areas in the warm-up area and I tripped on one while running. My arm got entangled in my accreditation tag, because you had to wear it everywhere you went, so I couldn’t break my fall and was knocked unconscious for 18 minutes. I came to in the hospital while my poor husband was sitting in the stadium wondering why I had not come out for my heat.”

She was determined not to miss out on her Olympic opportunity and immediately asked if she could run the 1500m instead, as the heats were still a few days away. Her doctor told her that she had suffered a serious concussion and was in no condition to run, but Gwen managed to convince him to let her run. “I had to agree to him personally checking me after each run, but I lined up for the 1500m heats – with the third-slowest qualifier in the field. I ran every heat like it was a final, and you’d think I had actually won the gold medal when I came over the line in the semi. I ran a 4:06 in the final to finish ninth, despite a fractured cheekbone and looking like I had been beaten up, but I didn’t care, because I was just so overwhelmed to have made an Olympic final. I’ve been upgraded to sixth since then, after all the doping disqualifications.”

LOOKING BACK
Today, Gwen looks back on her career mostly with satisfaction, but does regret one decision. “I should have run my first marathon earlier, just after the 1996 Olympics instead of waiting till 1999. I think I could have gone much faster in my prime than the 2:36 I managed. Still, I feel privileged to have lived the dream of being a full-time athlete, and I loved every minute of it.”