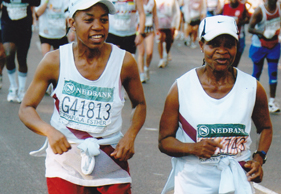 Martha Mokobe grew up in Hammanskraal, just outside Pretoria, and moved to Johannesburg in 1991. She moved in with the Rogers family in Craighall Park 13 years ago when they employed her as a domestic worker, and says at that stage, she had never run before, describing herself as being “very lazy.” Like many women, it was her dress size that convinced her to take up running in 2000. “I wanted to lose weight because I was fat, I was wearing a size 38. I started running, but I wasn’t very serious about it, and sometimes I trained, other times I didn’t.” This routine continued for some time before Martha’s employer Michael Rogers, asked her one day when she returned from a run, if she had joined the local running club, Rand Athletic Club. “I said no, because I didn’t have the money, then he gave me the money and I joined the club. That’s when I started getting serious about running!”

Now she says she has been a member of the club for so long she can’t even remember when she joined! “The people at the club are very friendly and I’ve made many friends there. I run the club’s time trial every Tuesday and in the mornings I run with one of the training groups. We start from the local gym at 5:30am, run for about an hour and by 6:30am I’m back home. Then I take a bath and start work by 7am. I have made lots of friends thanks to running, including my best friend Mmapula Seshabela.”

Martha remembers her first race being a 15km in Pretoria. She finished in a time of 2:14 and says it was hard, so she just ran slowly, but since then she picked up the pace and gradually graduated to longer distances, culminating in finishing the big daddy, the Comrades, for the first time in 2007. “I started slowly with the 15km, then I ran 21, 32, 42 and 50km. I did the Two Oceans in 2007 and then I decided I want to run the Comrades.” Martha has now run five Comrades Marathons, earning three bronze medals and two Vic Claphams, and she hopes to earn her green number in 2016.

COMRADES MEMORIES
“The Comrades is a special race, I love it. I can still remember my first one. It was nice and I was excited because I didn’t know the route and I didn’t know what to expect. I ran the whole race with my friend Mmapula, we started together and finished together and that made it very special. Now I don’t have to run it with someone anymore, I can go on my own if they go too slow or too fast, and sometimes I can even help other people next to the road. I like the Comrades, it’s far but it’s nice. There are lots of people on the roads and lots of supporters, so I enjoy it. Every year when I finish and I’m tired and hurting, I say ‘no more, I’m not coming back and doing it again’. But then, when the injuries are better and the tiredness is gone, I decide I’m going back again. I don’t think I can go any faster and just want to finish another five Comrades to get my green number.”

Despite all the pain associated with the Comrades Marathon, Martha admits she prefers longer races over short distances. “I like the long races like marathons because with the short ones you have to run too fast. I like long runs, where I can just go slowly.” She is also most definite that she prefers the Comrades Up run. “I hate the Down run, it hurts too much. You have to train harder to run up, but it is better than running down, because it doesn’t hurt as much.”

A HELPING HAND
She knows she would not have been able to come this far as a runner without the encouragement and support from her employers, Michael and Suzanne Rogers, and is very thankful for their support. “My people help me a lot to run because they see it is a thing I love to do. They help me to fly to races that are far, like Comrades and Two Oceans and when I have an injury, my madam, Suzanne, tells me what to do because she is a physiotherapist. She tells me if I should stretch something or rest something, and then it helps me.”

LOVING IT
Martha gets excited as she speaks about her sport and says the main reason she does it, and continues to do it, is because she loves it. “I really enjoy running. When I’m running I’m not thinking about nothing, I’m just enjoying the running. I clean the house, do the washing and ironing, and look after the children, so I’m busy with lots of work and I need to run to relax. Sometimes you’ve got stress and you go there and run, and when you come back all the stress is gone, you feel tired and you just bath and get in bed and you sleep better. I don’t think I’ll ever stop running, even if I’m old, I like to do it. It’s strange, because I never ran in school, I was lazy. I never thought I would do this now when I’m old! But I love going out to races, because I can go out with my friends and we enjoy it.”

She is eager to share her running advice with others. “You must enjoy the road and keep telling yourself you will finish, then you will. My advice for people when running Comrades is to just go slowly and don’t tell yourself you want to run a certain time. I just always want to finish a race, no matter what my time is.” But she admits that she always pushes herself to finish a 10km in under an hour. Her PB for the shorter distance is approximately 54 minutes, while her marathon PB is 4:15.

LIFE-CHANGING
Through her running, Martha not only lost the weight she wanted to – she went from a size 38 to size 32 without going on a diet! – she also stopped drinking and saw parts of the country she had never seen before. The first time she was in Cape Town was when she flew down to run the Two Oceans, and the first time she saw Durban was when she arrived there to run the Comrades in 2007. Similarly, she has also travelled to Zimbabwe to run the Two Countries at Musina Marathon, and she ran the Longtom Marathon in Mpumalanga, all places she would likely not have seen if it wasn’t for running.

She remembers how she used to drink quite often before she started running, but says since she hit the road, she doesn’t touch alcohol anymore. “You can learn something from running, because before I ran, I used to drink, but when I started running, there was no more drinking. Before, when I saw my friends we used to drink, now I have other friends and when we get together we only talk about our training, where we’re going to run next, which races we’re going to go do, and we plan our weekends. Running changed my life and I’ll never stop doing it. I love it!”