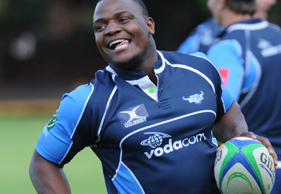 It may come as a surprise to most to hear that the burly hooker used to be a middle distance athlete during his days at Numbi Primary in Hazyview, Mpumalanga. He even has a few medals to show from his days of participating in the 3000m event! “I did most sports in primary schools and my favourite athletics items used to be longer distances. I ran with my younger brother and even though I didn’t have the build for it, I really enjoyed it. I started playing rugby when I was eight years old and started focussing on it when my coaches spotted I had talent. They helped me to really excel in rugby and I am grateful for that.”

NATURAL TALENT
This talent helped the hooker move up the ranks quickly and he represented South Africa in two u/19 World Championships before leading the u/21 side at the 2005 World Champs. The next year he was drafted into the senior side at the age of 19, but since then it hasn’t been all smooth sailing. Since captaining the u/21 side he has been earmarked as a future Springbok captain, but his struggle with injuries and the amount of world class hookers in South Africa has kept him sidelined for big parts of his professional career. It has been a long and hard road for Chiliboy to be in contention for this year’s World Cup squad, and it has taken a lot of patience and hard work to get more game time and start featuring regularly in both the Blue Bulls and Springbok line-ups.

This year he impressed for the Bulls in the Super 15 and he was one of the few players to deliver quality performances in the Springboks’ recent Tri-Nations tour of Australasia. Though he has been released from the national squad for the home leg of the tournament, Chiliboy is still working hard to be named in the final World Cup squad and he says running is one of the most important things to help him reach this goal.

GETTING TO THE TOP
“Rugby has become an all-round game and it’s no longer like back in the days, where you had your big, fat front rowers that got to maybe two rucks in a game. Now you have to be everywhere, and be there first, or you’re not going to make it, so fitness is incredibly important. Running forms the base of your fitness for endurance and for speed; both are extremely important and only after that comes the strength training and the rest.”

“Our training differs from person to person, because you need recovery time and rest after a match in order to get moving again. The first two days of a week are normally your hardest when it comes to running, as it helps you to recover before the game training and contact sessions kick in. If you feel you need that extra edge, it’s important to run more – and the fitness staff will always be available for that!”

Luckily, Chiliboy says he likes running, so working on his fitness is not a problem and he usually goes for runs on his own during the off-season or when he wants to recover from a hard match. “I usually go for a 3km or 4km jog to help me recover, and I have a running partner who helps me with my running technique to keep the rhythm going and so on.”

In fact, he says he enjoys it so much he might even consider running something like the Two Oceans once he is finished with his rugby career. “Running is ideal to keep yourself healthy and fit, and I will ensure that I keep going when I don’t play rugby anymore. Maybe I’ll do a Two Oceans one day, but I don’t think I’ll do the Comrades, because running 90km at once seems like killing yourself slowly. I think half marathons will be the ideal challenge for me. I’m very competitive, so I think with 21km I can still stay competitive and push myself.”

But for now he is only running for one thing: That Springbok jersey.