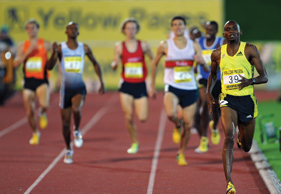 Ask most sport fans what the three biggest sporting events on the international calendar are and chances are good they’ll immediately get two right, the Olympic Games and the FIFA Soccer World Cup, but few will know that the IAAF World Athletics Championships rank third on this list. With some 2000 athletes from just over 200 countries heading to Daegu in South Korea at the end of August, this means that the World Champs will be the world’s biggest sport gathering of 2011!

In 2009, the USA topped the medal table with 10 golds and a total haul of 22 medals, with Jamaica second on seven golds and a tally of 13 medals. Russia and Kenya each took home four golds, and a respective total of 13 and 11 medals, whereas no other country could claim more than two golds or hit double figures overall. South Africa finished ninth on the table with two golds and a silver. Only 19 out of 202 countries participating could claim a gold medallist, and only 37 country’s athletes made the podium across all the events – down from the 22 and 46 respectively of 2007 – so you can see how tough it is to earn a World Champs medal.

SOUTH AFRICAN HOPES
At the time of writing (late June), the final South African team had not yet been announced by Athletics South Africa, but there were some safe bets as to who would make the team and be likely medal contenders in Daegu.

Men’s 400m Hurdles
LJ van Zyl owns the five fastest times run in 2011 thus far, and also look out for Cornel Fredericks, who ran the seventh and ninth best times of the year, with only American Jeshua Anderson getting between the two South Africans, and then only by one hundredth of a second faster than Fredericks. If both South Africans can get into the final in Daegu, we could see an incredible double medal haul in an event that has long been one of this country’s strongest.

Men’s 800m
South African hopes will be pinned on defending World Champion Mbulaeni Mulaudzi, who hasn’t been in the best of form this year – although that said, his best of 1:45.50 in Rome in May is not too far off the year’s best 1:43.68 run by Sudan’s Abubaker Kaki, while world record holder David Rudisha of Kenya has run 1:43.88. The 800m final at major championships often becomes more of a tactical race than a flat-out speed race, and if Mulaudzi can avoid getting boxed in, he may be able to bring another medal home.

Women’s 800m
Nobody will forget the political hot potato that Caster Semenya’s disputed gender testing became after she won the 2009 World Championship title, and having finally been allowed to return to competition late in 2010, she is slowly regaining the form that saw her blow the field away in Berlin. Fastest this year has been Halima Hachlaf of Morocco (1:58.27), with Caster fifth on the list with 1:58.61, and the South African is one of only five women to break 1:59 thus far this year, and one of only three that have done so twice, so looks a good bet to medal once again.

Men’s Long Jump
Having won the silver medal in Berlin in 2009 to go with Olympic silver in 2008 as well as World Indoor Champs gold in 2008 and silver in 2010, South Africa’s Godfrey Khotso Mokoena is one of the favourites for 2011 in terms of pedigree. However, in terms of form, Mokoena’s best in 2011 has only been 8.19 metres, meaning nine athletes have jumped further this year, led by Australian Mitchell Watt’s two 8.44 leaps. Second in the rankings is Zimbabwean Ngonidzashe Makusha (8.40), followed by 2007 World Champion and 2008 Olympic Champion Irving Saladino of Panama (8.30), so Mokoena will have to lift his game in Daegu if he wants to finish on the podium again.

Men’s Javelin
If he can find another three to four metres, Robert Oosthuizen could emulate South Africa’s first ever World Champion, Marius Corbert (1993) by bringing home a gold medal in the javelin. His best of 84.38m puts him 11th on the world list for 2011, behind the world leading 88.22m of Vadims Vasilevskis of Latvia. Next best is Germany’s Matthias de Zordo on 85.78m, so Oosthuizen is clearly within reach of a podium finish if he has a good meet.

THE MAN TO WATCH: LJ VAN ZYL
The 400m hurdles star is the only South African going into the World Champs with a world number one ranking, having posted the five fastest times in the world in 2011, and the only man in the world to dip under 48 seconds this year, which he has done four times! He was also unbeaten on the world stage until June’s IAAF Samsung Diamond League Series meeting in New York, but that could be good going into the World Champs, to keep him on his toes. Granted, he also went into the 2009 World Champs with the world’s fastest time of that year, and only made it as far as the semi-final round, prompting some critics to say he had peaked too soon in the season, but Van Zyl has hopefully learnt from that experience and will go into these World Champs older and wiser.

With the 2002 World Junior Champs title and Commonwealth Games gold (2006) and silver (2010) medals behind his name, he will be looking to add to his honours in Korea. He will also be looking to improve on his World Champs record, as his best result thus far was fifth in 2005. In 2007 he was eliminated in the heats and in 2009 he made the semi-final, just a year after finishing fifth in the Olympic final in Beijing. His confidence will have been boosted by beating Llewellyn Herbert’s long-standing South African record when he ran 47.66 seconds in Pretoria in February, and then ran what is still the year’s third-fastest 400m time in the world a month later, clocking 44.86. However, it will be his specialist 400m hurdles event where he will be aiming to bring back World Champs gold.