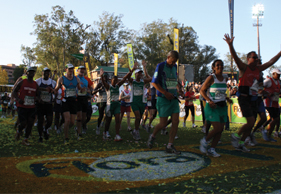 Comrades Marathon, Durban to Pietermaritzburg, 29 May 2011

Petrus Seleke
8:25
Goodie Educators AC
4th Comrades
I was going for a silver medal but it was not to be today, as I had an injury recently. My PB is 7:59, but I will be back for my silver and I will keep running until my son can run the race with me.

Ryno Verster and Brynley Bath
7:21 and 8:25
Rand Athletic Club
2nd Comrades for both
Ryno: This was my first ‘up’ run and I can tell you it’s much harder than the ‘down.’ It’s just relentless, with wave after wave of climbing. With about 35km to go I ran out of gas, so I slowed down a bit until I felt better and I got my second silver. I’ll probably be back again – it’s a special race with the vibe and the people next to the road, despite the pain you put yourself through… or maybe because of it.

Mahomed Naroth
Did not finish
South Coast Striders
13th Comrades (finished 6)
I had the best of training beforehand, but things just didn’t work out on the day and I missed the halfway cut-off by 10 minutes. I was going for my 7th medal and am a bit disappointed because it seems as though my green number is getting further and further away instead of getting closer. I love running, it disciplines you and keeps you healthy, and the Comrades is such an institution in our country, so I’ll keep coming back until I have my 10th medal. The moment I realise I do not enjoy it any more, I will stop, because running is about enjoyment.

Martin Vilakazi
8:41
Sasol Marathon Club – Secunda
5th Comrades
My race was good and I didn’t struggle with cramps or sore legs. I prefer the uphill because I’m tall and this was a PB for me on the ‘up’ run. I did more than 1000km in races and 3000km in training, so I was well prepared to go for a sub-8:30, but I lost time in the last 21km. I need more time to train, because work gets in the way, you know!

Jeremiah Kgomokaboya
8:31
Magnolia Road Runners
1st Comrades
This was my first Comrades and I definitely underestimated the race! I went through halfway in 3:30, which was way too fast because the second half was much harder. I’m not sore now, my legs are just tired, but I’ll be back next year and won’t underestimate it again.

Piet Sethosa
8:29
SANDF AC – Limpopo
10th Comrades
Today was a fantastic race and I am so happy because I got my green number, so nobody else will wear this number again! I would have loved a silver, but am just glad to have finished. I never struggled, but I went up Polly Shortts at a slithering pace. I’ll be back again – I will run until I get my pension.

Mahlatini Mosiea
9:44
SAPS AC – FS
17th Comrades
The race was alright. My first half was a bit slow because I had flu before the race and couldn’t train as well as I wanted to, but in the second half I performed. I’m addicted to Comrades and will keep coming back until I have my double green number, then I’ll see how my body feels.

Willie Freeks
8:31
Run Walk For Life SWD
13th Comrades
Today was very tough, it was my slowest Comrades yet. I think it was because the Two Oceans was so close to the Comrades and I felt it in the last 20km. But it’s still the best marathon in the world!

Mpho Chuene
9:10
Toyota AC
3rd Comrades
I was going for a sub-9:00 and I had the energy, there was nothing wrong with my legs to run the last 4km in 15 minutes, but I just couldn’t make it. I have a problem with my mind, so I’ll be back next year for my first Bill Rowan.

Wade Burmeister
9:48
Durban High School Old Boys Club
1st Comrades
It was awesome! Big up to the supporters, they were fantastic and keep you going whenever you feel like walking. I’ll be back next year to experience the vibe again. It was all just so well put together.

Anelle Vorster
8:01
Irene Road Running Club
6th Comrades
It was a good race. I prefer the ‘up’ race because I’m tall, so it doesn’t hurt so much. I’ll keep going until I’ve done 10, but then I’m finished. Hopefully I’ll get my silver on my 10th, because I get closer to it each year.

Julita van Zuydam
9:57
Estcourt Athletic Club
7th Comrades
I really struggled today. My knee gave me trouble in the last 16km, but I stuck it out and prayed a lot. This wasn’t my fastest Comrades, but it was definitely planned better than my previous ones – with age comes wisdom, you know. I won’t be back next year, because I had breast cancer a few years ago and this was my last one after I was declared clean, to prove to myself I can still do it. I’m a little sad, but also relieved that it’s over now, because they don’t get any easier. The support next to the road was fantastic, I wouldn’t have been able to do it without them.

Frikkie and Sanet Loubser
8:52 (Sanet)
Running Inn Athletics Club
10th Comrades
Sanet: My first 40km were very hard, but after I got through that bad patch, the second 40km were much better. This was my 10th, so I think I’ll take a year or two off and maybe then I’ll come back. It doesn’t matter if it’s up or down, this race stays hard.

Sibongile Shongwe and Kehumile Headbesh
10:26
Dosco Gijimas
11th Comrades
The supporters make this race. I’m probably a sucker for pain and finished with an injury, but experiencing their support makes everything better.

Lorraine Rogers
9:40
Plexus Durbanville AC
14th Comrades
This was by no means my fastest Comrades, but it was definitely one of the most special ones. I think God had a reason for me to run today and it was fantastic. I ran with a friend who was in an accident some time ago and we didn’t know if he would be able to walk again. He was so uncomfortable during the race, but he was an inspiration to me, and because I went a bit slower than usual, I saw things today that I’ve never seen before. I saw Arthur’s seat for the first time and the wall of honour. It gives you a different perspective. It helps to go slow sometimes.

As a complete Comrades ‘novice’ I wasn’t sure what to expect of this race as I set off to KwaZulu-Natal to report on the Ultimate Human Race. I had never even been in KZN on race weekend, not to mention Durban or Pietermaritzburg, and have always thought anyone doing this race must be a little crazy. Well, even though I still believe this, I am concerned that I might be getting a little crazy myself, because after experiencing it for the first time I can feel the Comrades seed growing… – BY CATHARINA ROBBERTZE

My day started off on the media truck along with about 10 other media people. Despite the incredible cold and not being able to see a thing for the first two hours of the race, the experience on the media truck was memorable. From as early as 5:30 the overhead bridges were filled with supporters, setting the tone for the rest of the day. From the truck we had a front row seat on the leaders. As always, the rabbits went out hard and fell behind after about 30km. When Point Chaza set a blistering pace for almost two hours, we thought he might be making history, but it was all part of the plan for his clubmate Stephen Muzhingi as he and Fanie Matshipa overtook Point soon after Drummond to start their battle for top spot.

Watching these two runners was poetry in motion. For almost two hours they matched each other stride for stride, running shoulder to shoulder and neither one giving an inch. As Little Polly’s approached we thought we were in for a thriller, but that was also when Stephen’s experience shone through and he started to pull away from Fanie. Despite his best efforts, Fanie couldn’t keep up with the fast pace he had helped to set and when we reached the top of Polly’s, we knew Stephen had it in the bag. However, after seeing Fanie in action, we also knew he would be back next year, vying to bring the Comrades back home.

The finishing line of Comrades was all I had hoped for, with a few dramatic cut-offs, a little bit of blood and lots of sweat and tears. There was some semblance of disappointment from a few runners, but the overwhelming majority were relieved and proud at having completed one of the greatest challenges they will ever face.

After all is said and done, the one thing that stood out most was the support next to the road. Without it, the Comrades Marathon would not be the race that it is today. A friend who was unable to run this year and spent the day next to the road confirmed what I had been suspecting all day: It is harder work supporting than it is to run the race! They might not have the stiff legs and blisters, but the supporters are just as tired as the runners by the end of the day, and with nothing to show for it at the end of the day. The runners get a medal and a cold beer, and they don’t have to do the dishes for at least three days. So I salute the supporters… you make the Comrades.