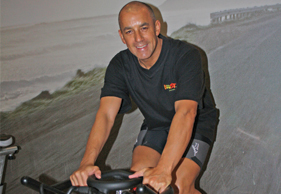 Bruce first got involved in the fitness industry when tragedy struck soon after he returned from his two years of military service. His girlfriend at the time was killed in a motor accident and, needing an outlet, he went to an aerobics class with a friend. While using this as an outlet, Bruce soon realised his coordination was better than most others in the class and it wasn’t long before he was an aerobics instructor himself. Then about 12 years ago, after 14 years as an aerobics instructor, Bruce found himself on a spinning bike for the first time. Since then he has become a spinning legend.

WORLD RECORDS
Until recently Bruce had two Guinness World Records behind his name, both of which he set in the early 2000’s. One for the greatest distance achieved on an indoor cycling machine in 24 hours and another for the longest continuous spinning marathon. For the first he pedalled 783km in 24 hours, with team mate Arthur Soares and for the other he spun continuously with team mates, Felicia Sarris and Adele de la Rey for almost four days. Their official time was 81 hours 20 minutes and they cycled more than 2 000km in this time. Some of the criteria for this record are to maintain a pace of at least 25km/h throughout the attempt and only taking a 15-minute break every eight hours. The rest of the time your feet are not allowed to touch the ground.

Bruce remembers the actual ride to not be the worst part, but says the training takes over your whole life, while the cost to do something like this is incredible. Then, of course, there’s the problem that you do not have any skin left on your buttocks and your hands are raw when you eventually stop spinning!

Bruce describes his training for these attempts as old-school. He trained for approximately eight months, spending about 25-30 hours per week in the saddle, running 8-10km three times a week and doing gym work four times a week to strengthen his upper body. “Some days my training partners and I would go to gym at night and they would lock us in there. The next morning when they got back we would still be riding.” They never spent more than 16 hours at a time in the saddle and Bruce says the reason for this was to not realise how they were going to feel while doing it. “It was better not knowing what to expect than have fear set in because you know what it’s going to feel like.”

LIFE IN THE FAST LANE
As a runner Bruce did some racing in earlier years and he ran back-to-back Comrades Marathons in 1990 and 1991, with a PB of 8:53. He also did a few 100km races and 100-milers, but says he’s done with racing now because there is not enough time in his day to train for it. He is on the go pretty much 24/7, and between instructing spinning classes, working a full-time job and managing the complex where he stays, there is barely time to sleep. “My days start at 3:30am and only ends at 11pm, I only sleep four hours per day and live life in the fast lane.”

When he’s not instructing a spinning class, Bruce keeps things ticking over by spinning on his own or going for a run to mix things up a bit. “I do short stuff of about six to eight kilometres and just do it because I enjoy it. Spinning helps my running, but running doesn’t necessarily improve my spinning, so it’s just about ticking over and enjoying it.”

A LOVE FOR SPINNING
Except for the odd 94.7 Cycle Challenge, where he participated as CHOC Cow on a ‘rickshaw’ bike, Bruce has stuck to spinning for most of his cycling career, and says he finds road racing too dangerous. But, he says, spinning has been a fulfilling choice of sport. “I love doing it and have met so many awesome people over the years. You need to have a relationship with the people in your class, otherwise it’s flat and there’s no vibe.”

This relationship, along with the quality of his training, means Bruce’s spinning classes are always packed. Following the original principal of spinning, he simulates the ride on the road when spinning. “You can’t just sit on the bike and do speed with no resistance. You either have to sit down and ride strongly with a bit of a gear to simulate a flat, or you have to do interval training and get your heart rate up with proper resistance and speed. It is possible to go racing on the road when you’ve only been training on a spinning bike. I’ve done it, but you have to do it correctly!”

Bruce’s training philosophy has been greatly influenced by his non-stop lifestyle, and he believes in quality training instead of quantity. “I don’t believe in going to the gym for two hours, and then standing around for 90 minutes talking. I go, do my training and get out of there. You don’t have to train for hours, you can do shorter things, but you have to do quality.”