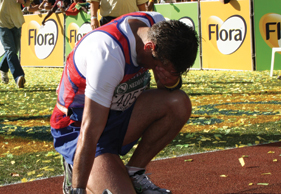 GET REAL, YOUR EXPECTATIONS WERE TOO HIGH
If you regularly trained at around 6min/km and ran a comfortable marathon in about 4:30 or Two Oceans in just under 6:00, then you cannot expect to run a sub-9:00 Comrades. It just won’t happen. These times indicate a 10:00 Comrades. In the same vein, you cannot seriously believe you can achieve a bronze if your ‘normal’ marathon times are close to 5:00.

REST IS BEST
Ask yourself if you got enough recovery time during training? 2011 will be remembered for Two Oceans being too close to Comrades for a proper recovery. Whilst you could have, and should have, run Two Oceans or an equivalent distance around that time, you should NOT have raced any ultra so close to Comrades. Running and racing an ultra are two totally different challenges, with very different consequences in terms of recovery. So if you raced Two Oceans, you probably had a ‘disappointing’ Comrades.

Most runners do not allow for sufficient rest and recovery, particularly after running 30km or more in training. Your body can normally handle about 2:30 of running or intense exercise before it starts breaking down and causing damage. Any distance/time longer than this simply needs relatively more recovery time.

The art of training is to break down your muscles gradually in order to build them, as each rebuild adds a little more protective muscle and you can run a little further next time. So, you have to do both. Distance without recovery and vice versa are a waste of time, as is trying to cram in the miles, so build slowly over time. This is also why for most athletes, their third or fourth Comrades is usually the best, as the muscles have built up over time and become racing machines. You simply cannot do this in one season without risking injury.

Proper and regular hydration and carbohydrate intake from the get-go is critical. Two little or too much and you will have a poor second half. The average body needs 40-60g of carbohydrate during intense exercise, depending how fit you are and how fast you are going. This intake can come from any source – Coke, banana’s, potatoes, pasta, gels, jelly babies, whatever makes you happy – as long as you keep a consistent intake to at least maintain your blood sugar levels.

LOSE THE WEIGHT!
Do not kid yourself, carting a few extra kilo’s for 90-odd kilometres takes a lot of work. Imagine strapping, say, four tubs of butter on your waist and going for a run. See how heavy this becomes and how much more strain your body takes. Take off a few kilo’s and see how much faster you run over any distance. Losing weight is straightforward: Eat less and exercise more. It is that simple.

STOP STRESSING
Stress has a major impact on athletic performance. After many years of experimenting, I have determined it is better to start Comrades with a hangover than to be stressed because you could not have a beer or three the night before! If you do everything right for Comrades but are overweight or stressed, either from non running issues or stressing about the run itself, you will have a sub-par run.

When all has been said and done remember the following: You may just have had a bad day at the office. Stuff happens!

Denis has run 22 Comrades Marathons, 21 Old Mutual Two Oceans Marathons and over 150 standard marathons. He recently won his age group at Ironman 2011 and Ironman 70.3. Check out his website at www.mytrainingday.com