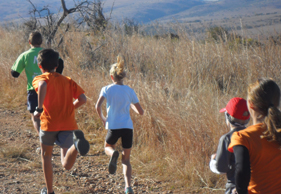 The recent SPAR Women’s 5km in Durban was a hotly contested race between three youngsters, but more importantly proved that South Africa’s young and upcoming talent is alive and well! Simonay Weitsz, a grade 6 student at Laerskool Van Riebeeckpark, took the early lead with two local Durban girls Klara and Natascha Hartmann. Between the three of them they fought all the way to the finish line for the top spot. It was only when they entered the stadium that Simonay says she knew she was going to take first place. She crossed the line in a time of 19:37, not bad for a 12-year-old girl that can fit under most adults’ shoulders.

RUNNING TALENT
After participating in her first cross-country race only two years ago, Simonay’s mom realised her daughter had talent and took her to Willie Engelbrecht, a well-known coach in the East Rand. According to Willie, he knew early on that Simonay is special and his confidence in her soon paid off as she has been a member of the Central Gauteng cross-country and athletics teams since 2009. “Simonay is a natural and one to look out for in future. I never have to worry about her and she just keeps giving great performances. She’s one of those athletes that just perform better than others, even when she’s put in the same amount of work as other athletes.”

Though the 1 200m is her favourite event, Simonay’s sporting talent has really come to the fore with her superb winning performances at the SPAR 5km and the recent Gauteng Winter Trail Series. She swept aside all competition at the Trail Series, not only winning her age group by a massive margin but also being the first overall female home in all but one of the races. It has been these performances that have made people sit up and take note of this petite, blonde girl.

FOR THE LOVE OF RACING
Simonay says she fell in love with running from the moment she started running competitively, and it is this love for competition that drives her. An easy race isn’t that much fun as one where she is pushed to perform better by her competitors. “I like a challenge and love a close race. Just the other day I had one of my closest races yet and it was great winning that race!”

But in her short running career, Simonay has also had to deal with some disappointment. At the SA Schools Championships earlier this year, she lined up for the 1 200m hoping to take the title and break the national record, but unfortunately she fell at the start of the race and ended in a disappointing third place in a time of 3:51. “If I didn’t fall, the record would have been mine, because I had beaten the girl who won several times before.” Simonay has since run the 1 200m in a personal best time of 3:46, only three seconds slower than the national record set in 2006, and she hopes to break this record before she moves on to the 1 500m next year.

Simonay remains a young girl with more on her mind than just running, and she says one of the things she likes most about her sport is having some time away from her younger brother, Dwayne! Add to that the fact that she has made so many good friends in her training group, and she doesn’t mind having to train during the holidays and on icy winter mornings. “I like training and most of the times I don’t mind getting up early, but sometimes when we train really hard, it’s not that much fun.”

WATCH THIS SPACE
As for the future, Simonay has big plans. She wants to follow in her role model Irvette van Blerk’s footsteps and become one of the best runners in the country, hopefully claiming a medal for South Africa at the Olympic Games one day. She dreams big and says after that she plans on taking on the biggest race in South Africa, the Comrades Marathon, and taking back the title from all the foreigners that have dominated the race in recent years.

And who knows, maybe the only woman who will be able to break Frith van der Merwe’s record will be another young girl from the East Rand…