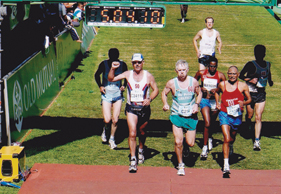 As you run down Chapman’s Peak Drive into Hout Bay in the Two Oceans Marathon, you pass East Fort, one of the oldest working batteries of original canon in the world. On race day, the Honourable Order of Hout Bay Artillerymen fire a canon when the leading man and leading woman pass by, to officially welcome them to ‘The Republic of Hout Bay.’ – and until a few years ago, a third canon shot was fired, when Chet Sainsbury came past. It was a mark of respect for the Two Oceans Race Director from 1981 to 2008, and something he always felt very honoured to receive. “I used to tell the guys around me to expect a big bang, and this happened for a number of years until I retired as Race Director, when I asked them to stop firing the canon for me,” says Chet.

It would actually be quite appropriate for Chet’s salute to be reinstated in 2012, because earlier this year he became the only runner/cyclist to have completed 30 Two Oceans ultras and 21 Argus Cycle Tours, with both races coming down Chappies and passing through Hout Bay. That means he has a triple blue permanent number in the Oceans and is a member of the prestigious Argus Club 21. “I think there are five guys who have done every Argus and there are 13 or 14 guys ahead of me in the Two Oceans, but I’ve checked and I’m the only one with 30 Two Oceans and 21 Argus medals, so it was quite an honour to pass both milestones this year.”

LATE STARTER
Chet only got into running aged 35, when his rugby-playing days came to an end in 1977, and he ran his first marathon the following year, finishing the Peninsula in 3:18. His best marathon would be 2:41:47 in the same race in 1983. He went on to run the Comrades Marathon 14 times, with a best of 6:56:53 and 11 consecutive silver medals, and he’s also done three Puffer 80km trail runs and finished the Rhodes 52km ultra three times. However, it is the Two Oceans that he is most widely associated with, and he says he would have had more medals had he not become Race Director.

“When I took over in 1981, I didn’t run it for five years because I was too scared to leave the finish on race day in case anything went wrong. Later I ran the race on the Friday, but with only 25 or so runners out there, that got boring, so eventually I said to the club I wanted to run on the Saturday to experience the race proper. I knew I could only do that with Annemarie behind me, and a strong committee and staff who did a wonderful job while I was running.” (His wife Annemarie was Race Secretary for 21 years.)

He rode his first Argus in 1980, finishing in 3 hours 39 minutes, despite riding his son’s school bike, which had a basket in front and a carrier rack at the back. “The bike had a bell, which I cheekily rang to pass other riders, and I didn’t even take off my son’s heavy lock-chain, wound around the saddle stem!” His best time of 3:37:21 came in 1995, and he has 14 sub-4:00 finishes. “I don’t race the thing madly, and I don’t ride in the big pelotons. When riding so close, it’s very easy for 30 guys to be pulled down through one guy’s carelessness. I always enjoy it, but am always relieved when it’s over.”

LONG SERVICE RECORD
Chet worked for Old Mutual for 42 years until retiring in 2003. He started as a clerk in the revenue section and worked his way up to National Sponsorship Manager, where he helped get the company into road running as the national sponsor of the sport, which included sponsoring the Two Oceans. He also served on the SA Road Running Commission, and was Vice-chair of Western Province Athletics and Chair of Western Province Road Running for many years.

Nowadays he is only semi-retired, because when he stood down as Two Oceans Race Director in 2008, he was immediately approached to become Race Director of the Landmarks Half Marathon, which in 2010 was judged the best half and overall runner-up race of the year in the Western Province. More honours followed in 2011 when Chet was awarded Civic Honours by the Protea Sub-Council of the City of Cape Town, in recognition of his work to promote the area through the Two Oceans and Landmarks.

STILL CRUISING
He shows no signs of slowing down just yet. “I’m 69 and want to carry on running and riding as long as everything in my body is still working, but I am more cautious these days. I just do two marathons a year, the Peninsula and Winelands, as well as Two Oceans. I really think your body can only take so much.” He says his only disappointment is that he can’t get a Sainsbury medal, the new Two Oceans medal introduced in 2006 for a finish between four and five hours and named after him. “I gave it a go in 2006, but could only run 5:04, and sub-5:00 is now beyond me. Still, running the Two Oceans is always a fantastic experience, because many people know me. I’m called Oom Chet, Madiba Chet, or Madala, Old Man. Runners chirp me and we have a friendly chat, and I find it very uplifting.”

LEFT ARM ANTICS
Chet Sainsbury ran his first Comrades in 1978 and earned a bronze medal. A second bronze followed in 1979, and then came a streak of 10 silvers in 10 consecutive years, including two sub-7:00 finishes in 1984 and 1986. However, it is the 1987 run that has stayed strongest in Chet’s memory, because it was the most painful.

You see, he was accidentally tripped near the start and fell to the ground, smashing his left elbow against the hard tar surface of the road. When he picked himself up, in great pain, he discovered that he had a dislocated olecranon bone. In layman’s terms, that means the pointy knob of the elbow was nearly halfway up the outer side of his upper arm! And he couldn’t swing or lift his arm at all. But having trained for months for the Comrades, and with another silver medal firmly in his sights, Chet just clamped his arm to his side and ran on, despite the great pain. He had to stop at every water table and turn around to pick up drinks, because the tables were all on the left side of the road, but he pushed on and eventually finished in 7:20:09 for another silver!

After finding his wife Annemarie at the finish, they headed over to the medical tent, but when the medics wouldn’t allow her to go with him into the tent, Chet decided to leave it, go back to the hotel and fly back to Cape Town the next day. Only then did he get to see a doctor, who diagnosed a fractured elbow and booked Chet in for an immediate operation.

As luck would have it, Chet has had two other bad falls in his sporting career, both while riding his bike, and both times he landed on his left arm. After the second injury, when his wheel got stuck in railway lines in the Cape Town Harbour while he was measuring a race route and he was flipped over his handlebars, he still ran the Puffer 80km trail race a few weeks later with his arm in a sling. Everything was fine until he reached MaClear’s Beacon on top of Table Mountain and had to be pushed up one section by a fellow runner, because he couldn’t use both arms to pull himself up when a little bit of climbing some rocks was required.

But nothing was going to stop him running!