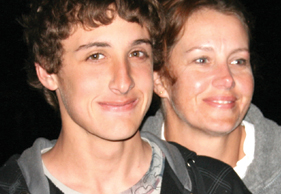 Shaun was my only child and my reason for living. He was my friend and we had a relationship that was so special. Yes, there were times we had our differences – he was on his way to 18 and was ready to face the world on his own, fearless and excited. When I got that call, my breath was ripped out of me and I just wanted to stop breathing, forever. He died on a Monday afternoon, on his motorcycle, and exactly a week after that day my takkies hit the tar again. I will never forget it. I ran 8km and it was utter hell; I could scarcely see the road through the tears, but I experienced such a sense of relief and it felt so strange, and it was then I realised it’s while running that I could talk to my son.

RUNNING SUPPORT
I’ve always been a slow runner, just doing it for myself. I enjoy the people and the excitement of a race. I always made the cut-off’s and my biggest race was the Two Oceans Ultra. At Shaun’s service, while doing his eulogy, my eyes fell on my running buddies and I told them that they were going to have to get me through the Comrades. Today, after many sessions with my psychologist, I realised I turned away from the other people at the service. I only spoke to my running buddies, as I could focus on something else and not the real reason we were all there.

In the December holidays our whole family gets together at Gansbaai and I could not see how I was going to get through the festive season. At seven every night I drank a sleeping pill and an hour later I was asleep. In the mornings, my sister, her other half Bobby and I went running, and I realised more and more that it was those times that I could get quiet times with my son, myself and our heavenly Father. Bobby taught me the serenity prayer on the run. Many times he had to stop so that I could breathe and get rid of the painful anxiety that was clutching my heart. But they kept me running, and that December the three of us ran the Danger Point Half Marathon in Gansbaai and I knew I had to keep running – it was the only way I was going to keep going.

FOR MY SON
2010 arrived with such heartache. Everybody was looking forward to the Soccer World Cup, but I had this black hole eating away inside me and it was growing bigger every day. My doctor phoned and told me he could prescribe an anti-depressant that wouldn’t interfere with my running, and a month later the medication started working. I could breathe again. I ran stronger than ever and started pushing myself. The training for the Comrades was great, as each step was one step closer to personal and physical victory. I needed to do that first Comrades for my son, to make him proud of his mom, but also for me, to show myself I could do it, as well as a reason to live. Just getting up in the morning was so difficult. I used to wake Shaun to get ready for school and make him breakfast, now there was nothing, no reason to get up and face the day.

Comrades 2010 arrived and we were there. My goal was just to make the cut-off line with about five minutes to spare; my second (secret) goal was to try running it under 11 hours, but that felt like a pipe dream. I was scared of being too emotional while running, and the idea of literally running the whole day just seemed so inconceivable, how on earth was I going to do it? The cock crowed and we were off! Or rather, standing, then starting slowly. The realisation then set in… I was there, doing my first Comrades!

We tried staying with the 11-hour bus, but couldn’t keep up. At the 15km mark my running buddy Renate told me to go ahead, as she was going to take it slower. Thus my Comrades with my son started. There were times that I had to look next to me to make sure he wasn’t running next to me, and at one stage I told him, “Look, we have to take it slower now, as I can’t go anymore.” But we slogged on and at about 60km, caught up with the 11-hour bus, without any conscious planning. There were a lot of runners and I decided to get slightly ahead of them to get away from the crowd. A little later I caught up with another 11-hour bus and I ran with them for a while. Suddenly Durban was spread out ahead and I realised there was an end to the race. I finished my first Comrades in an amazing time of 10:40, and when I ran over the finishing line my first thoughts were “I love you, my son, and thank you, Father.”

GRIEVING PROCESS
After running the Comrades, I finally did my sub-2:00 on a half marathon and I finished the Karoo Ultra. In October, I decided to give up taking the anti-depression medication and it affected me very badly. I lost my enthusiasm for running and for life. Each day became a struggle again, but I needed to experience real emotion and grieve without any aid.

Comrades 2011 was like this humongous mountain ahead of me. What made 2010 so unreal was that it felt like such a surreal experience. Standing there again this year on the morning of my second Comrades was so special, after all the sacrifice and training. This time my running partner was Bobby, the same one who taught me the serenity prayer. Before 30km I was ready to give up a hundred times, but it was Bobby’s first and I just didn’t know how to tell him I couldn’t continue running. He sensed how I felt and every few kilometres he would count from 1 to 3 and then we had to shout “Hoo-haa!” A couple of times we had to repeat it, as other runners also wanted to take part in what became a ritual the whole race through.

Reaching the top of Polly Shortts was amazing and then we opened up and just ran (as much as you can ‘run’) the last 8km of the Comrades. Entering the stadium was a personal miracle, and I realised that as much as 2010 was an almost holy experience for me, 2011 was like my grieving process, just one step in front of the other to the finish line. I knew I wasn’t going to make it under 11 hours, but that didn’t matter, because I want 2010 to always stand out. We did it in 11:19 and I got my back to back medal.

Shortly after finishing, I bumped into an old friend of mine from Pretoria, Albert Coetzee, who throughout the last few years has sent me countless e-mails to help and encourage me with the running. He embraced me outside their club tent and held me tight and prayed for my husband and I, and as I stood there crying, I realised once again that every step was worth it.

ONE STEP AT A TIME
My grieving is like running the Comrades; there are wow moments, and times you just want to give up, but somehow you keep putting one step in front of the other and every step is a step towards the finish or the healing. I read this the other day: “Life is not about waiting for the storms to pass…It’s about learning how to dance in the rain.”

We lost our brother in 1980 and I recently asked my mom how she coped. She answered that you never get over it, you just learn to live with it.

So thank you to all my running buddies and every runner out there, because there’s a struggle inside most of us, regardless of what it is. Just put one step in front of the other, savour those wow times and put your chin down for those vasbyt moments. You are all truly amazing people.