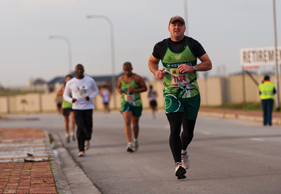 Tekkie Town is celebrating its 10th birthday this year and has come a long way from its humble beginnings in 2001. Over the years it has become known as a store catering for the whole family, making it an affordable spend for everyone. Selling great brands at great prices has always been one of the cornerstones of the Tekkie Town business, which has grown tremendously. “At first we grew by three stores a year, then by six and eventually we opened 45 stores in 2008,” says Gert, who describes himself as a born retailer. “In the retail industry, service and a great product is everything. I believe in treating a customer like you want to be treated.”

STARTING OUT
When it comes to retail experience, Gert is right up there with the best, having been in the retail industry for the last 20 years. His career jumpstarted about 16 years ago when he met Braam van Huyssteen, owner of Tekkie Town. “He asked me to manage Tropica, his local store in Mossel Bay. At first, we sold formal pants, belts, shirts and other fashion clothing that catered for the relevant market at the time. But soon we started tapping into the sporting market, selling cricket bats, tennis and squash racquets, sport shoes, etc. We started off with a few major brands and expanded to include most other big brands. The years from 1994 to 2000 were very good retailing years!”

From Tropika, a couple of Sport City’s rolled out, catering for the sport lover. “About the same time the Tekkie Town franchise saw the light. It started as small franchises in places such as Riversdal and Piketberg. From there we rolled out the main Tekkie Town enterprise all over the country, under one owner’s umbrella.”

A PASSION FOR ALL THINGS SPORT
Gert is just as passionate about sport as he is about his career. “I have loved sport since school days. I surfed, and played cricket, squash and golf. But in 2008 I picked up a bad virus and nearly died. Shortly after recovering I had to remove my tonsils, then I had a double groin operation. To top it all, I suffered from high blood pressure and cholesterol. I thought it would never end! Then my doctor suggested I start running. How’s that for a doctor? First he prescribes exercise before he prescribes medicine,” chuckles Gert.

So Gert started running initially for health reasons, but it quickly grew into a passion far greater. “I have a great wife and two loving children, and I realised I had to change my lifestyle, but in the process I started loving running, fitness, the beautiful scenery and meeting likeminded people.”

Gert has achieved many personal victories in his sporting life, one of them conquering the Merrell Eden Duo over 150km. “I was part of a relay team and was very proud when we finished, especially because I had no running background. I was also very proud when I completed the Two Oceans Half Marathon.”

He admires the elite athletes, but it is the average runners who have inspired him most up to now. “Former minister Adriaan Vlok started running at the age of 55 and ran his first Comrades at the age of 62. He finished third-last! That inspired me, and of course my doctor, who motivated me to start running with him in 2010 and to join a club.

Besides running Gert also enjoys mountain biking, as he sees it as great cross-training. He loves surfing and though he hasn’t done it for a couple of years, plans to get back on a surfboard soon. “I think we all have a goal of finishing Comrades, but I would also like to run an international marathon. The idea of participating in events across the globe inspires me.”

BALANCING ACT
Gert describes his working days as full and not always typical. “I believe in hard work at the office followed by a good run or a gym session. Spending quality time with my wife and children is very important to me.”

He fits sport into his busy life by planning ahead and making time for it. “It is not always easy and it takes strength of character to discipline yourself.” Running has definitely influenced his career and work ethic, and Gert believes sport gives you mental strength in your career. “Being fit makes you operate with more vooma! On top of that, running is a great stress reliever. There is no excuse for not exercising!”