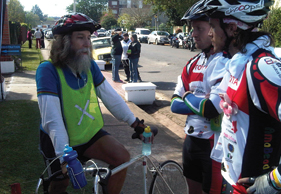 Xavier started to plan his trip and train for this mammoth task in November last year when he entered the Comrades for the 11th time. “I didn’t have the money to get to Durban, so I thought why not cycle there and run back after Comrades? So I got a map and started planning the route.”

What makes Xavier’s journey unique is the fact that he did it solo. “I had nobody running with me or seconding me. Sometimes I did 45 to 50km on one litre of water because that was all I could carry. I carried everything in my backpack. Shoes, clothes, medical kit, a little bit of food and whatever else I needed, but I couldn’t carry more than 10kg because weight was critical. I expected to get food along the way and mostly I did. I trained beforehand without water to prepare myself for the dehydration factor, but to me it was a dream run, I didn’t have any blisters or injuries and never dehydrated.”

THE JOURNEY
Xavier’s choice of route was determined by the fact that he could not cycle or run on any national roads because he was on his own. All in all, he cycled 697km from the Union Buildings in Pretoria to Durban in four days to arrive just in time to register for the Comrades. He then ran the Comrades in a time of 10:55 for his 10th bronze medal (his 11th overall). After taking a rest day the Monday after the race, he ran another 650km in eight days back to Johannesburg. The worst injury he suffered while running was a broken tooth… and that was because of a frozen jelly baby! The four days of cycling was the cause of greater pain and he says his buttocks were completely blown when he arrived in Durban.

Of course, there were tough times on the road, like one night when he only had raisins and a sports drink for supper because he was too far from a town to find food, or like the times when it was so cold that his hands couldn’t change the gears on his bike, but problems like these didn’t get him down. “You can either make crossing a river a problem, or you can just do it. Sure it’s hard, but you just have to keep going.”

Though Xavier was predominantly alone on the road he did receive valuable help from a few good Samaritans. “One guy gave me two pairs of shoes, a cell phone and he took me to Pretoria on the morning that I started. This from someone who I only met a few months before! I can’t pay those who helped me back, I can only say thank you.”

GIVING BACK TO CHARITY
Xavier’s journey has inspired him to start a charity called the Feeding Charity Chain Gang (FCCG). Through the FCCG he aims to supply those less fortunate with seeds, implements and skills to plant and grow their own food. Anyone interested in contributing to the charity can phone Xavier on 079 301 6891 to find out more.