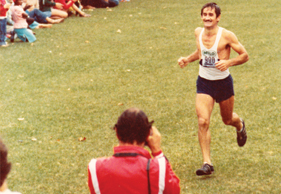 When Calie Beneke lined up at this year’s Comrades Marathon, he had only trained 23 days for the big event. A niggling injury kept sidelining him since January and he nearly gave up on finishing his 35th – and last – Comrades Marathon this year. But then something happened; on 25 April an old training buddy from Australia phoned and asked whether he was running the Big C. Calie replied no, but that same afternoon he donned his running shoes and ran 3km for the first time in months. His injury held up and over the next 23 days he followed it up with more runs, his longest run being 30km.

On 29 May, Calie lined up at the start of Comrades 2011., and finished in a time of 10:04, but admits it was a long day on the road. “I didn’t put pressure on myself to finish in a certain time, but my body told me that I was doing too much. The last couple of kilometres I started falling apart. Despite this, it was a good day out and I enjoyed the race.”

THE FIRST OF 35 JOURNEYS
Calie’s first Comrades came in 1967, at the age of 30, shortly after a parachute accident in the army in Bloemfontein. “When they removed the plaster around my leg, I had a pair of tekkies in my hand, and when the doctor asked me what I’m planning to do with the tekkies, I said I’m running Comrades! He told me to forget about it. Shortly after I finished my first Comrades in a time of 8:12.”

Four years later, in 1971, Calie met Comrades gold medallist Gordon Baker and started training with him. “Gordon convinced me to tackle Comrades for a second time. I did and 1971 was the actual start of my Comrades career. In those years I was very competitive. I suppose I still am, maybe now more within myself. When one finishes Comrades, you want to know that you ran to the best of your ability. Comrades is an emotional race and day, no matter how many times you have run it.”

TRAINING IN THE HEY DAYS
Calie remembers his training in the ‘old days’ with fondness and says in those days the longest training run before Comrades was definitely not a 60km run, as many runners do these days! No way, it was running the Comrades route, all 89km of it! He still chuckles about the time he met up with eight friends to run the Comrades route as training. The night before the group of friends watched a movie and returned just before midnight. They realised they had to get up three hours later to run and decided it was pointless to sleep. Why not start running immediately? And that’s exactly what they did. “We arrived at Polly Shortts just as the sun came up.”

Then there was the year when a double tot of whiskey got Calie through another Comrades training run. “Gordon and I were a bit faster than our training group. We got a bit ‘windgat’ and decided we would start 16km outside Maritzburg and catch up with the group. Well, we ran the first 16km in 60min, and needless to say, further in the run I started feeling dizzy and had double vision. I went into a hotel at Drummond to wash my face, and as I walked out the barman asked me if I wanted a drink. I downed a double whisky, and by the time I hit Pinetown I was in perfect shape!”

Since that day Calie has made his whisky drinking at the halfway mark in Drummond his Comrades tradition. He pulls out his little Whisky bottle and downs a double tot before he sets off on his way again. “It’s worked for me! I suppose everyone has their own little remedies. In the old days I know some runners drank salt, glucose, bicarbonate of soda and aspirin, all mixed in their energy drinks!”

And on top of all that he is the first person to have received the first and the last silver medal at Comrades. In 1979 he finished in 11th position in a time of 6:09, earning the first silver medal on the day. Then in 1992 he got the last silver medal, finishing in a time of 7:29:59. “I didn’t plan that! As I came into the stadium I stopped to look at all the spectators. Then suddenly I heard the announcer saying there were only 45 seconds left to the cut-off for silver medals! I ran so fast and saw the guy with the gun in the air. As I ran across the line I tackled him off his feet,” says Calie, who has a marathon PB of 2:28. His many achievements include running the London to Brighton in 1975 and finishing Two Oceans six times; his best time being 3:33.

SAYING FAREWELL TO COMRADES
In 2003, Calie ran his 30th Comrades, and because he always wanted to finish his Comrades journey on a round number, it would have been his last. “That morning at the start, I cried like a child, and even later on while running. Just thinking that it was going to be my last Comrades made me very emotional. Shortly after I finished I decided to keep going till number 35!”

“Now I am definitely finished with Comrades, but not with running! Training for Comrades takes up a lot of your time; for a couple of months it becomes your whole life and you can’t even visit friends without worrying about the long run you have to do the next morning. I also have some niggling injuries. My body is telling me it is time to stop.” But as long as he is able, he will keep on running. “To me, running is like breathing – I cannot live without it. It is in my blood.”

WORDS OF WISDOM
Calie says it’s up to each runner to decide what works for him or her. He says he is not the perfect example of how one should train, especially because he never believed in a long taper period before Comrades. “Some guys start tapering six weeks before Comrades. I never did, that was when I started doing most of my distance. If you had to dig a hole for a day, your hands will get sore and you will hurt, but do it for a month and your body will get used to it. The same goes for running, over the years my body adapted to my training programme.”

One thing he does believe in strongly is not to race too often, a mistake he says too many runners make these days. In his build-up to Comrades, Calie would only do one race a month. “You cannot run a PB at every race and every time trial. One hard race a month is more than enough.”

Calie, a proud member of Kempton Road Runners, is known for some of his unique ways, such as talking loudly to himself when running. “I know some people might think that ‘old toppie’ is off his trolley, but it helps. When running down Fields Hill at Comrades, I constantly remind myself to slow down.”

His advice to runners is to always persevere until you are tired… and then you still keep on running. “Too many runners think they are tired while running and then they start walking. Actually they are not tired, just fed up of the distance and mentally tired.”