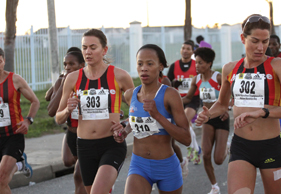 At the Lotto SA Half Marathon Champs in Port Elizabeth on 2 July, Zintle Xiniwe came home second in 1:13:15, just 16 seconds behind winner Rene Kalmer, and a mere 13 seconds off her personal best, set on this same course in 2008. Zintle, who won this title in 2007 and 2008 and also finished second in 2010, had gone to PE aiming not only to finish amongst the medals, but also to break her PB – and she would undoubtedly have done so had the lead car not missed a turn and taken the runners an extra 180 metres. Her estimated finishing time, based on average pace, would have been around 1:12:35, meaning she should have shattered her PB in PE!

Naturally disappointed about this, Zintle says she was still happy with her second place and good time, because it is just another step in her continuing improvement since making her comeback in late 2009 after giving birth to her son, Iviwe. “He is the greatest thing that has ever been given to me by God, but making a comeback is hard, and I have to thank my training partners and my coach, Marshal Moloi, as well as my mom and my friends, for helping me to get back to this level.”

“I saw that I was getting fit again, so I told myself I am going to train even harder. Next I won the Western Province Half Marathon Champs in 77:08, and then I went to Robertson and ran 74 minutes. I felt in my body that day that I would run a good time, but it was still unbelievable to go that much faster. Now I have run another 73, which should have been a 72 – that was disappointing, but it will come!”

PEDIGREED ATHLETE
Born in 1986, Zintle began running when she was eight. In high school she specialised in the 1500m and 3000m, and still holds the Western Province 3000m junior girls’ record. She was soon representing the province, and has gone on to represent her country all over the world, from Zimbabwe, Kenya and Algeria to Mauritius, China and Hungary. Having started her running career with the RCS Gugulethu Athletic Club, she had spells with Atlantic Athletic Club, Celtic Harriers and Mr Price Western Province before joining her current club, Nedbank Western Province. She still lives and trains in the Gugulethu township where she grew up, and she studied sports management at college, but is currently a full-time athlete, which allows her to spend a lot more time with her son.

Zintle has consistently been one of the leading female athletes in South Africa for the last few years. Besides her SA 21km Champs success, she was also runner-up in the 2010 SA 10km Champs, and she has finished on the podium in various Spar Women’s Series races around the country as well as the Old Mutual Two Oceans Half Marathon. Meanwhile, on the track, she was second in the SA Champs 5000m in 2007, 2008 and 2011, having already represented South Africa in the 3000m at the World Youth Champs in 2001.

Unsurprisingly, there have been some disappointments along the way. Having won the 2008 SA 21km title, Zintle was selected for the SA women’s team for the World Half Marathon Champs in Brazil, but having fallen pregnant, she had to withdraw. Happily, with her return to form in 2010, Zintle was once again selected and went to the 2010 World Half Marathon Champs in Nanning, China, where she put in a strong showing to finish 37th. This saw her recently honoured as the 2010 Western Province Athlete of the Year.

FORWARD THINKING
Zintle says her immediate goals now are to represent South Africa once again in the All Africa Games and World Half Marathon Champs, and then hopefully to step up to the marathon in time for the 2012 London Olympics. At the rate that she is currently improving year on year, her chances of achieving her goals look good right now.

Ren? Kalmer won her 31st South African title, but first over the 21km distance, while Stephen Mokoka clinched his 10th in the recent SA Half Marathon Champs. Their respective winning times were 1:12:59 and 1:02:07, but due to the course being 180m long, the winning times should have been closer to 1:01:35 and 1:12:20. Mokoka also won this title in 2008 and 2009, and turned the tables on third-placed Lucky Mohale, the defending champion, who beat Mokoka for the 10km title earlier this year. Two-time former champion Zintle Xiniwe was second in the women’s race for the second year running, while 2009 champion Annerien van Schalkwyk came home third. Defending champion Irvette van Blerk, who recently posted a blistering 1:10:56 in the USA, unfortunately could not run due to an injury.

* Kotov, although a foreigner, has permanent residence status and is thus eligible for the national championships.