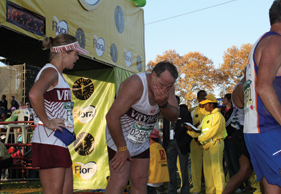 I have been running for two years and have done three ultra-marathons to date. I seem to suffer from exercised induced nausea. As a race progresses, I tend to get stomach cramps. I drink regularly, but whatever I take in just sits in my stomach and does not pass through the system. The result is I did not urinate at all during my 2010 Comrades. I ended up in the medical tent and the doctors said I was dehydrated, but as I left the tent, I vomited out all the liquids in my stomach. When I ran Two Oceans this year, I felt the same nausea after the race, but did not throw up. A week later I ran a 54km race at a very slow pace and surprisingly did not suffer from any symptoms. Can the intensity of a race be responsible for these symptoms? – HAMID SANGLAY

ANSWER
Exercise intensity can definitely be a one of the causes of your gastrointestinal tract (GIT) disturbances, which are common in endurance athletes. Exercise affects the GIT in a variety of ways, all of which can disturb the GI function and result in abdominal pain, diarrhoea, nausea, vomiting or even bleeding. It has been shown that there is a relationship between increasing exercise intensity and a reduction of blood flow to the GIT. The result may be nausea, which at some point may progress to vomiting, stomach cramps and diarrhoea; more than just impaired digestion. These symptoms can be severely, even critically compounded when hot weather and dehydration are thrown into the mix.

Without sufficient blood supply, the GIT simply can’t function as designed, rejects the stomach contents, and in some cases the contents of the intestinal tract. The reduction of blood supply also compromises the intestinal barrier, contributing to and compounding the GI symptoms.

Another concern which may be affecting your absorption is the type of fluids you are consuming. You may not be getting the correct type and concentration of your fluids, which may be causing the fluid that you are drinking to not be optimally absorbed. (Check out a previous article I wrote on hydration and sports drinks, titled Beat your Thirst, archived under the Nutrition section on the Modern Athlete website.)

Some Recommendations
• Avoid solid food three hours or so prior to exercise.
• Take liquid food as a pre-race meal and during endurance events, e.g. Future Life cereal or Perpetium (from Hammer)
• During endurance events, the optimal concentration of your drinks should be ‘isotonic’ e.g. sports drinks like Powerade or Energade.
• Keep meals the day before the race low in fibre.
• Drink the same drinks in training as you will on race day.
• Avoid caffeine prior to and during exercise.
• Drink a lot of fluid the day before the race and avoid alcohol up to 48 hours before.

Persistent Sharp Pain
In November 2009, whilst running at the 36km in the Nelspruit Marathon, I felt something ‘pull’ just below my abdomen. This created a sharp pain when picking up my legs and I had to walk the last 5km. Despite a long layoff, I’m still troubled by this. An ultrasound scan found nothing. I have cut back on my training and manage by taking painkillers. I also use a sauna belt and strap it tightly around the painful area, but at the 18km mark the pain is severe. I’m determined to continue with my running, as it keeps me healthy and my weight in check. Please help – I’m desperate. – MIKE GORDON

ANSWER
The symptoms you describe sound very much like it could be coming from the pubic symphysis, a cartilaginous joint that is tightly bound by very strong ligaments that allow a very limited amount of movement.at the front of the pelvis, where the two pelvic bones join. There are several muscles that attach near the pubic symphysis and exert a pulling force on it as they contract. Excessive force due to too much repetition or a single high force, can damage the symphysis, causing inflammation and resulting in a condition known as osteitis pubis.

This is usually an overuse injury and typically occurs due to repetitive running, kicking or changing of direction. Pain may be experienced on one or both sides of the groin, the lower abdominals or at the front of the hips. Pain is also usually experienced by firmly touching the pubic bone at the front of the pelvis and aggravated by exercise such as running or kicking. The treatment requires sufficient rest from any activities that increase the pain, and once the activities can be performed pain-free, a gradual return to these activities is recommended, provided there is no increase in symptoms..

Ignoring symptoms delays the healing process and is likely to lead to the condition becoming chronic and requiring an intensive period of rehabilitation, with the likelihood of future recurrence increasing. Recovery can take six months or more.

A careful physiotherapy assessment is required to determine and correct the factors that have contributed to the injury. These can include muscle weakness (especially the gluteals or core stabilisers), muscle tightness, inappropriate training, increase in training frequency and intensity, poor posture and poor pelvic and core stability.