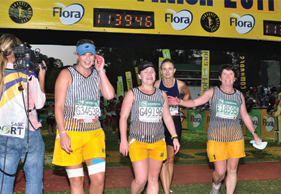 Reiner Stucky 34616
Age: 51 Club: Volksrust
Comrades run: 15 (plus 1 DNF)
2011 time: 10:51:29
My 2011 Race: I had a great race, and just took it easy. I have been totally buggered after this race before, but this time I felt OK. I had wanted to finish under 10:30, but I was always on the edge for that, and when I went through halfway, I knew I wasn’t going to get it, so I just wanted a sub-11:00. So I walked all the way up Polly’s because I knew I had enough time, then cruised home, finishing between the two sub-11:00 buses. I actually put down 10:30 for myself in our club’s time prediction competition, but there wasn’t enough money riding on it to push any harder.

Donna Lee Meyerson 31014
Age: 38 Club: Run/Walk for Life CG
Comrades run: 1 DNF
2011 time: Did not finish
My 2011 Race: It just wasn’t my day. My legs felt great after they warmed up, but I just had no gas in the tank and I struggled from the start, so I decided to stop at 60km when I knew a finish was not on the cards. I made the Cato Ridge cut-off by 45 minutes and would have made Camperdown as well, but the last cut-off at Polly Shortts would have left me 6min/km for the last 8km, which would have been impossible for me. On paper it was the right decision, but I have to live with the sting for a year before I can put it right. I will earn my Comrades pride in 2012!

Nikki Campbell 18595
Age: 48 Club: Fish Hoek
Comrades run: 14
2011 time: 11:39:44
My 2011 Goal: I was aiming for bronze, but had to settle for a Vic Clapham, because I wasn’t in the game until 30km in the race. I was very distracted, and was running it like a fun run, until at the top of Fields Hill I realised I was behind and had to refocus and start again. The highlight was catching my daughter Heather just over Polly’s and finishing with her. But I learnt a lesson this year: I wasn’t disrespectful of the race, but was not focused enough. The beauty of the Comrades is that you have enough kays to fix mistakes and pull back time.

Daryl Heffer 22141
Age: 34 Club: Westville
Comrades run: 1
2011 time: Did not start
My 2011 Race: My knee started hurting two weeks before the race, and despite going to the physio, resting and strapping the knee, it just wouldn’t come right. The day before the race the physio just said don’t even try to run. I have a friend who ran two years ago on a dodgy knee and it’s taken him till now to be able to run properly again, so I had that at the back of my mind. Obviously, I’m very disappointed, because it would have been my back to back run and medal, and can I never do that again, but I will be back to try again.