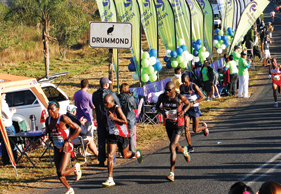 THE TOP WOMEN
The top ten finishers in last year’s men’s and women’s races will all be lining up again this year, looking to defend their titles and improving their placement at last year’s race. In the women’s race the Russian Nurgalieva twins, Elena and Olesya will look to rack up another one-two finish for Mr Price International, but you can bet the rest of the field will be giving their all to topple them from the top of the podium.

Between the two sisters they’ve taken home the winner’s trophy six out of seven times since 2003, and after their continued dominance at the Old Mutual Two Oceans Marathon in April, it seems they are untouchable at the moment. However, don’t think the rest of the women’s field will simply be fighting for third position! Russians Marina Myshlyanova, Anna Pichtova (both Mr Price International) and Irina Vishnevskaya (Nedbank) will be hot on their heels, while the American Kami Semick and Brit Lizzy Hawker (Bluff Meats AC) will also hope to impress.

South Africa’s hopes will be placed firmly on Farwa Mentoor (Bonitas), who has been the first South African home eight times in the last nine years, as well as Lindsay van Aswegen (Toyota), Adinda Kruger and Lesley Train (both from Nedbank), who were next over the line after Farwa in 2010. Farwa has also been the leading South African woman five times in nine years in the Two Oceans, and has said that the Comrades is once again her big focus this year. Adinda will have to improve her PB of 6:36 considerably to reach the podium, but she gave the twins a run for their money at last year’s Two Oceans with a late surge. She was not in top form at last year’s Comrades after only recovering from the flu a few weeks before the race. This year she didn’t compete at Two Oceans to focus her energy on the Comrades, so hopefully it will pay off!

Other names to look out for include Kerry Koen (Nedbank), Riana van Niekerk (Mr Price), and the Scot Ellie Greenwood (Nedbank), who will be running her first Comrades.

THE TOP MEN
The men’s race may be a more open affair, with all eyes on Zimbabwean Stephen Muzhingi (Bluff Meats AC), who will be under pressure to claim a third consecutive title, but for the first time on the more challenging ‘Up Run.’ He was fifth in therecent Two Oceans, showing that his form and speed are looking good ahead of Comrades.

A strong South African contingent will be hoping to bring the trophy back home, with last year’s podium finishers Ludwick Mamabola and Bongmusa Mthembu (both Mr Price) leading the charge. Ludwick was arguably the find of last year’s race and will hope to improve on his second place in 2010 with the change of direction, while Bongmusa will hope the home crowd will help him improve on last year’s third place. But don’t write off Fanie Matshipa (Toyota), Fusi Nhlapo, Leboka Noto (both Mr Price), Claude Moshiywa, Petros Sosibo, Peter Molapo and Peter Muthubi (all Nedbank). A lot can happen over 89km!

An exciting addition to the field is a team of Ethopians that will be hoping to show they are also a force to be reckoned with in the ultra marathon scene, while regulars Jaroslaw Janicki (Mr Price International) and Oleg Kharitonov will hope to emulate their female compatriots and make it an all Russian affair.