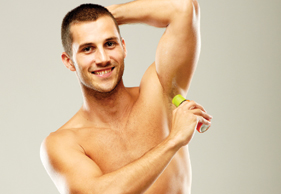 Let’s start with the basics. There are two kinds of sweat, eccrine and apocrine, and neither one smells like anything. It’s when bacteria on your body react with the apocrine sweat that you and your smell can become the proverbial elephant in the room.

We have about three million eccrine glands spread across the surface of our bodies that secrete sweat to cool us. This sweat is odourless and consists mostly of water and salt. It’s the apocrine sweat that contributes to unpleasant odours and this comes from about 2 000 apocrine glands that are primarily found in our hair follicles. They are concentrated in the areas under our arms, on our head and in our groin, and they only produce sweat when we are stressed (physically or emotionally). This sweat is rich with proteins and fatty acids, and although it is also odourless, the nutrients in it make a five star meal for the bacteria that stay on our bodies. It is when these bacteria feed on the nutrients in our apocrine sweat that the metabolic processes give off the smell we know as body odour, or BO.

BAN THE BO
Even though sweat is not directly to blame for body odour, it still shares responsibility and the fact of the matter is that with less sweat, there is less food for the bacteria, and therefore less smelliness. This means the first step in combating body odour is to reduce the amount of sweat on your body, and the vast majority of people do this by employing good personal hygiene. These are some of the important steps to follow to ensure you always smell fresh:
• One shower or bath a day is sufficient for most people, but make sure you have a shower after you’ve trained and you wash the smelly places under your arms, feet and all the other nooks and crannies thoroughly.
• If you still smell a faint whiff following you around, you can try using anti-bacterial soap to gets rid of all the unwanted bacteria that actually cause the unpleasant odour.
• Don’t wear clothes that are too tight and try wearing clothes specifically designed to wick sweat away from your body and help your body to breathe when you train. Also, wash your clothes after every exercise session to prevent the harbouring of bacteria in your clothes. You can try using detergent specifically designed to remove odours from sport performance clothing, such as Sport-Wash, available at Sportsmans Warehouse.
• Make sure you use an antiperspirant and not simply deodorant every day to control sweating and odours. Where deodorant simply masks the smell that come from bacteria by another fragrance, antiperspirant contains an element, usually aluminium, which plugs the openings of your sweat glands to make you sweat less, giving those smelly bacteria nothing to work with.
• Watch what you eat. There are some foods like curry, garlic and onion that can cause your sweat to smell different, while smoking, certain medications and even stress can lead to a different smell.

Johannesburg-based skincare therapist Joelette Theron’s advice is to try and minimise sweating instead of washing more, to avoid body odour before it even happens. She suggests drinking sage tea, avoiding spicy food, watching your weight and avoiding smoking, caffeine and alcohol to reduce sweating.

OUT OF CONTROL
In general, sweating is pretty normal, but if you think your sweating is abnormally high and becoming an embarrassment, you can visit your doctor and between the two of you, you can decide whether more drastic measures need to be taken. Though there isn’t any medication available to control sweating, procedures such as botox injections have been shown to reduce sweating in certain problem areas. However, doctors will usually advise you to start with the easiest, non-invasive option, such as using a stronger antiperspirant. If this doesn’t help, you may upgrade until you reach drastic measures such as surgery.

Although rare, persistent body odour can be a sign of something more serious. An extreme example is the genetic disorder trimethylaminuria, also know as fish malodour syndrome, which makes you smell like rotting fish. This condition is not curable, but with medication, a strict diet and counselling you can lead a normal and healthy life.

Keep in mind that every person has his or her own unique smell and there are a myriad of factors that influence this, including things such as gender, age, hormones, eating habits and genetics, so you will not smell the same as the person on the spinning bike next to you. The amount you sweat is also unique to your own body and there is no need to feel embarrassed if there is a puddle of sweat underneath your bike by the end of a hard spinning session.

SMELLY FACT
In a study done in 2008 it was found that women have almost ten times more sulphur in their sweat than men, which means that women should have a stronger body odour than men, yet neither of us smell like rotten eggs. The study found that women’s smells are similar to onions or grapefruit, while men smell more like stinky cheese!