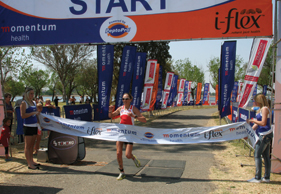 It is said that less than one percent of all athletes who participate in competitive sports ever reach an elite level. Being an elite depends on skill, natural ability and talent, but it takes years of hard work, discipline, focus and most importantly a lot of heart! One such athlete who knows all about hard work and never giving up is current SA marathon champion Charn? Bosman. She has been running competitively since the age of 15 and has achieved great heights, but also some disappointment in her career. But through it all she is still pushing ahead in order to reach her dream of competing at the 2012 Olympic Games in London. When chatting to Charn? one quickly realises that this petite Mr Price athlete from Pretoria definitely has a lot of heart.

“I know novices and other athletes often look at us elites and think running comes easy to us, but they don’t always realise that we suffer just as much as them – it’s just on another level. Every athlete has his or her own goals. It doesn’t mean if I run a 35min 10km and you run a slower 45min 10km, that you did not suffer as much as I did! We all go through hard times when running. I know it might seem easy when watching elites, but we put a lot of hours and hard work into our sport. We don’t just wake up one morning and run a 34min 10km,” says Charn?, who knows all about hard word, dedication and eventual success.

In 2002 and 2003 she won the Old Mutual Two Oceans Half Marathon, breaking the course record in 2002 (since then the record has been broken again). She followed that up with a win at the Old Mutual Soweto Marathon in 2003 and 2004, where she also placed fourth in 2009 and third last year. She was crowned 2008 SA marathon champ, a title she won again this year.

AN ELITE IN MAKING
Born in Malmesbury, Charn? was an active child, playing tennis and netball, but never ran. It was only at the age of 15 when the family moved to Pretoria that Charn? started running with her niece. “I remember running in my tennis shoes next to her. Without any training I could keep up and I think I then realised that I might have some talent.” Within six months she was awarded Northern Gauteng colours in cross-country, but it was only at the age of 19, soon after she she turned senior, that her big break came and she placed second at the SA Cross-Country Champs. “Gwen van Lingen won that day and I was the surprise package of the day!”

Her first trip overseas was in 1995 as part of a SA relay team. Back on home soil, her next big international event was the World Cross-Country Champs in Stellenbosch, where she learnt her first valuable lesson in competing at an elite level. “I listened to everyone around me. I had never run in spikes, but that day I did! Also, at that stage my fastest training kilometre was 3:09, but everyone said I must go out and stay with the front bunch. Well, I did. I ran my first kilometre in 2:57… and that was the end of my race! What a disappointment. But it taught me a lesson and I was determined to improve. I made the World Cross-Country team six times after that.”

TAKING ON THE DISTANCE
Charn? successfully moved up to half marathons before she decided to tackle her first marathon in 2003, which she managed to win despite terrible windy conditions on the day. “It was the Peninsuala Marathon in Cape Town and the wind was so strong that some of the elite guys pulled out. I just decided I won’t give up, because I have trained too hard, and I managed to win in 2:42.”

At the end of 2004 Charn? picked up a stress fracture and her Olympic dream was shattered. She quickly dusted herself off and ran her first international marathon in Amsterdam in 2005, where she finished in fourth position in a time of 2:39. “That was definitely one of the highlights of my career. I also qualified for the Commonwealth Games in 2006 in Australia.” However, disappointment was soon to follow.

The Commonwealth Games was one of the biggest disappointments of her career, but once again a valuable lesson learnt. “I decided to run in my old shoes, which had shoe patch on, but no one told me that shoe patch doesn’t roll effectively on racers. That meant blisters from the 5km mark. While running, I could see my feet bleeding, and reaching the finish, I pulled the skin off my soles. But I did not give up. I finished 15th in 2:48. And I learnt such a big lesson that no matter what, you do not change anything on race day!”

BOUNCING BACK
In 2007/8 Charn? battled with persistent injuries and could not figure out what caused them. Only last year she underwent a bone density test which showed her bone density to be at dangerously low levels. Since then she’s been on medication which has helped enormously. “For the first time since last year I am feeling stronger and like my old self again.”

Her renewed strength gave her a new lease on running and she is determined to make her Olympic Dream come true next year. In order to do this, Charn? has started training with her old coach, Gerrie Coetzee, who also coaches other elites such as Irvette van Blerk and Rene Kalmer. “I am so happy to be with a coach. It is very stressful to try and do your own thing, especially because you will never give yourself a chance to rest and you will keep on pushing harder. It is nice to have a coach you can trust.”

Shortly after she rejoined Gerrie, she won the 2011 SA Marathon Champs in a time of 2:44. “I know a lot of people are saying it is not a fast time and I agree, but that day I did not go for a fast time, I just wanted to take the title comfortably, which I did. My next goal is to run a marathon in sub-2:34 before April in order to qualify for the Olympics. I don’t think I have ever reached my full potential. I feel that only now am I in a position to do so. I have been invited to the Amsterdam Marathon in October and will try to go under 2:36 there.”

HARD TRAINING
As we all know to run a sub-2:36 marathon does not happen on 100km a week. Charn? trains twice a day and runs between 150 and 170km a week. This include speed sessions of 10 to 15 1000m with a 2min rest (jog) in between, tempo runs on Saturdays of 10 to 16km run at about 3:45min/km, and long runs of between 28 and 40km on Sundays, run at 4:00 to 4:15min/km. “Sometimes during especially hard quality sessions, I do go through hard patches, but I motivate myself by keeping my eyes on the end goal. Also, I tell myself there are many other elites out there doing exactly what I am doing and suffering just as much!”

She describes her long runs as “food for the soul”. In both training and races she never focuses on the end distance, and only focuses on the kilometre she is running. “I run kilometre by kilometre and every time one is done, I tick it off. You have to have a strong head and you need to remember that the path to the top is by no means easy. If you can’t work through hard patches in training, you won’t be able to do it in a race either. So you really need to focus on your training and put effort into it.”

When not out running she loves spending relaxing home time with husband Carel, an avid cyclist who has completed the Absa Cape Epic three times. “It is important to be married to someone that understands your sport. We make sacrifices because of my running, like not being able to stay out late because of early training the next day.”

Charn? plans to compete at the upcoming SA Half Marathon Champs as well as the final legs of the Spar Women’s Series. “I need to bring my 10km and half marathon times down in order to run a fast marathon. The Russians are running consistent 2:30 marathons and that is exactly what we should be aiming for.”

LOOKING AHEAD
After the Olympics, Charn? aims to move into ultra-distance races and would like to focus on the 56km Old Mutual Two Oceans Marathon, but for now her heart is set on one thing, to make her Olympic dream come true. “One thing I know for sure is that one needs to know where your strength comes from. My strength comes from God. I also realise that one needs to be grateful each and every day for the fact that you are healthy and able to train. It can be taken away from you at any time. Athletes sometimes get so frustrated when they don’t run certain times, but one needs to take a step back and realise how fortunate we are just being able to do what we do!”