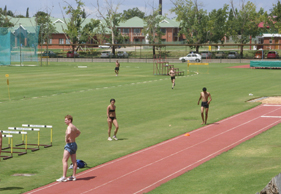 The Northwest University (previously the University of Potchefstroom) has always been one of the top athletics universities in the country, but in the past five years they have set the bar so high that most South African universities measure their achievements against those of the athletes from NWU-Puk. No wonder, either, because not only have they won the national student athletics championships for the past three years, but they have never featured lower than third overall in the final standings of this competition since the turn of the century.

In the 18-year existence of the competition, the NWU-Puk women have won their section nine times with the men taking first place six times, and ‘Pukke’ have been the overall winners nine out of 18 times. Doing this in a hotly contested competition is no mean feat, and Terseus Liebenberg, manager of the athletics club, says there are several reasons for their great successes. “We have bucket loads of talent on the campus and behind every successful athlete stands a hardworking coach who gives their all. Combine this with our world class training facilities and you have a recipe for success.”

RICH AND SUCCESSFUL HISTORY
Athletics has been a part of the old University of the Potchefstroom for almost a century, as the club was established in 1918. But even before the club existed, the university had top class athletes such as Chris Coetzee, who ran the 100-yard race in 9.8 seconds. The club had to wait until 1966 for its first Springbok athletes, Willie Coetzee (sprints and hurdles) and Fanie van Zijl (middle distances), but it was in 1968 that the university achieved one of its greatest successes. This was when Coetzee, van Zijl, Willie van der Westhuizen (sprints), David Booysen (shot put) and Bea Marais (middle distances) represented South Africa during a tour of West Germany. Bea and her husband Hennie Botha are still involved with the club today and their son, Hennie, represented the university at the World Youth Championships in Korea in 2003, winning a bronze medal in the 400m hurdles.

Since then the university has been a regular source of junior and senior world champions, Olympic athletes and numerous national champions. Its first senior world champion was Marius Corbett (javelin), who was also the first South African ever to win a track and field world championship title. Hestrie Cloete (high jump) soon followed in his footsteps to become South Africa’s second world champion, and she also competed at the Olympic Games with other Puk athletes Hezekiel Sepeng, Ockert Cillers (both middle distances), Sunette Viljoen (javelin) and Justine Robbeson (heptathlon).

PRESENT PERFORMERS
Today the club still attracts top athletes and their performances on track, field and cross-country are evidence of this. Terseus says track athletes such as the sprinters Simon Magakwe and Rapula Sefanyetso, middle and long-distance runners Tsholofelo Thipe, Rorisang Ramonnye, Andr? Olivier, Edwin Molepo, Elroy Gelant and Gert Manora and the walkers Inge Kotze, Corli Swart and Ruan Wessels are names to look out for in future.

The NWU-Puk campus has become renowned internationally as an ideal training ground for top athletes because of its high altitude as well as world class facilities, the presence of these athletes and the quality of coaches who help the athletes to achieve their best. The current crop of coaches include names such as Eugene Thipe (sprints), Ockert Cilliers (hurdles), Dr. Ria van den Berg (middle distances and hurdles), Hennie Botha and Jean Verster (middle and long distances, and cross-country), Owen van Niekerk (heptathlon and long jump) and G?rard Moerdyk (race walking). The field athletes train under the watchful eyes of Johan Swart, Izanne Ellis, Basie Koen, Pierre Blignaut and Terseus Liebenberg.

Terseus says one of the reasons why prospective students should consider coming to the Puk campus of the NWU is that they will not only leave as champions, but as well-balanced individuals, because a lot of focus is also placed on academics during their time as students. And judging by the history of the club, chances are that they might never leave, because a number of the coaches at the Fanie du Toit athletics field were once athletes for the university in their younger years. The fact that these athletes have chosen to stay involved with the institution for such a long time is a sure sign that athletics at NWU-Puk is healthy and thriving.