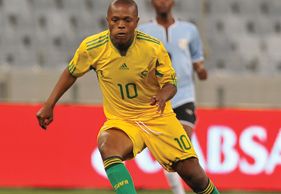 At the beginning of the recently concluded ABSA Premier Soccer League season, Cape Town Ajax youngster Thulani Serero was widely touted as one of the country’s brightest prospects and a Bafana Bafana star of the future. Nine months later and the 21-year-old has made his debut for the national team, came agonisingly close to helping his club win a first PSL title, made an unprecedented clean-sweep at the annual PSL Awards, and been transferred to Dutch champions Ajax Amsterdam!

MIDFIELD DYNAMO
Thulani hails from Soweto and began playing aged eight. He came down to Cape Town aged 13 for a trial with Ajax Cape Town, was signed as a junior, and made his senior debut in 2008. As a striker who has recently played more of a central midfield role, he has to be extremely fit to keep up with the game – which means plenty of running!

“At Ajax we do a lot of running in pre-season, mostly on grass. I’m not sure of the distance we do, but all I know is that we go around the fields a lot!” says Thulani. Then during the season, he says they do core and conditioning sessions, with core work focusing on skills and tactics, and conditioning on maintaining fitness, which of course involves still more endurance running, sprinting and interval training. “I don’t mind the running, but I prefer it when a ball is involved.”

The Ajax Cape Town playing style is based on the legendary Dutch Total Football model of the 70s, where all players in a team are skillful enough, and fit enough, to play in any position as players move around the field, constantly making the opposition players adapt and chase the game. Thulani therefore says he has to be super-fit to maintain his pace and concentration for a full 90 minutes, especially when he plays in centre midfield. “I am more of an attacking player, but I don’t mind helping out in defence when they need me to, so I do a lot of running in matches.”

At the time of this interview, Thulani was training solo in Cape Town ahead of his move to Amsterdam, to recover from a minor leg injury picked up in training with Bafana Bafana. “The rest of the Ajax guys are on holiday now, but I have to be fit when I go to Amsterdam. I was very disappointed to miss the Afcon qualifiers against Egypt, and as soon as I am injury-free, I want to get back into the national team. So that means running for me now!”