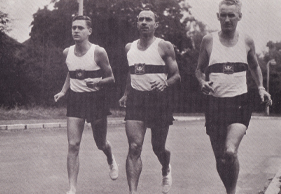 Think of any big name in running: Wally Hayward, Jackie Mekler, Johnny Halberstadt, Alan Robb, etc, and then ask yourself the question: What do these men have in common? Apart from their amazing running abilities, these elite athletes were all members of Callies at some stage of their running careers. And what makes Germiston Callies even more of a club rich in history is the fact that the club was founded in 1921, the same year the very first Comrades Marathon was run.

In 1932 a young man named Fred Morrison joined the club and became the driving force behind Callies for more than 40 years. The club excelled in track and field as well as cross-country, and in 1947 they broke into the long distance road running scene when they gained their first ever team victory at Comrades. Germiston Callies was the first ever club outside Natal to take the Gunga Din Trophy.

THE BIG NAMES
Over the next few years, several elite runners joined Callies, including Hayward and a very young Mekler, and the club’s Comrades glory grew hugely as Wally won four times in five years from 1950 to 1954. Then in 1953 the club undertook a new venture when three big Callies names, Morrison, Hayward and Mekler, went overseas to run in the London to Brighton Road Race. They crushed their opposition and victoriously returned home with the team trophy, and Wally went on to set new world records for 100 miles and the 24-hour endurance race while in the UK. In 1954 he went after the world 100-mile record again, running from Standerton to Germiston, but had to settle for ‘just’ setting a new South African 100-mile record of 13:08. Wally famously returned in 1988 and 1989 to run the Comrades again, aged 79 and 80, and finished both times as a proud Callies member.

Other big names who featured for Callies at the Comrades were Mercer Davies, who won in 1957 in 6:13, Jackie Mekler, who won in 1958 in 6:26 and went on to win the race five times in total, the 1961 winner George Claasen, who broke the tape in 6:07 to become the oldest winner of the race at 44, and Alan Robb who in 1976 won it the first time in 5:40 before going on to win another three times. Lettie Van Zyl also flew the flag for the Callies women when she won in 1976 in a time of 9:05, the first of three official wins after she had run the race several times unofficially when women were not yet allowed to enter the race.

These days the club has close to 200 members, many of whom have remained members for years even though they have moved away, says Andr? Berrange, club chairman.

RACES
In earlier days Callies was one of the few clubs that hosted as many as three races annually. Unfortunately, the Callies 25km night race was cancelled a few years ago due to traffic and safety concerns, while one of the better-known races, the Korkie 56km, was cancelled about 12 years ago. Ask many a seasoned runner and they will tell you this was one of the most gruelling races, run between Pretoria and Germiston. Even the legendary Bruce Fordyce often commented on this race, saying: “If you can finish the Korkie, you can finish Comrades!”

To replace this well-known race the club started a popular new event four years ago called the Callies Legends Series. This 32km and 15km event honoured one of the club’s Comrades winners each year – Hayward, Meckler, Robb, Davies and Claasen – and the fifth and last in the series was going to be held next year, but then the club recently discovered that Lettie Van Zyl was a sixth Comrades winner in Callies colours. “So we decided to add a sixth special legends race,” says Andr?.

Another popular annual club race is the Fred Morisson 15km in September each year. An exciting change this year is that the distance will be changed to a choice between a 10km and 21.1km when it is run on 3 September.

TRAINING AND COACHING
The clubhouse is located at the Germiston Stadium, where it has been for close to 20 years. A group of Callies runners meets there every morning, but because of the nature of the club and its widespread membership, there are no structured running schools in the mornings, says Andr?.

The club is very proud of its track and field section, and a group of at least 50 enthusiastic juniors train weekly at the Germiston Stadium under the watchful eye of coach Stephanie Kotze. “We have always been a strong track and field club, but over the last couple of years it has grown tremendously, especially amongst youngsters,” says Andr?. He invites anyone to join the track and field training sessions or to contact the club for more details.

COMRADES HERE WE COME
Comrades is definitely the club’s main focus annually. Last year, more than 70 members ran Comrades, while some 55 will take on the journey between Durban and Pietermaritzburg this year. “That’s not bad for a smallish club. We have a pre-Comrades breakfast as well as an aches and pains party in Durban the day after the race. We pride ourselves on being a multi-racial club in every way. We have a big contingent of black runners, many of them silver medallists, who are off to Comrades, and we try to assist wherever we can,” says Andr?.

“We are a great social club and pride ourselves on our traditions. We are all very proud to wear our colours and even more proud of the amount of Comrades winners who have crossed the finish line in the colours of Germiston Callies Harriers. That is something that will forever be part of our history.”