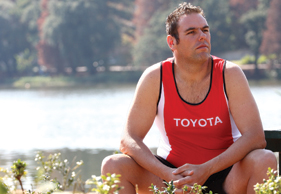 From his earliest memories, radio DJ and local celebrity Brad Brown was a “big kid”. He has tried every diet under the sun and says he has probably lost about three times his body weight and put it all back on again in his lifetime. One of the reasons for this is the relationship he had with food where it became an addiction similar to drug or alcohol addiction. “I remember when I was about nine years old, I was on Weigh-Less and was told if I’m good during the week, I could have a hot dog on the weekend. That’s ridiculous, it teaches you to starve yourself for the week and reward yourself with junk. What kind of a relationship does that create with food?”

“With diets, you tell yourself if you eat like this now, you can go back to eating ‘normally’ and that’s not the way it works. You have to change the way you live and know it’s about balance. To this day I still have to watch what I eat and I still slide off the back of the wagon sometimes. It’s like being a drug addict or an alcoholic and you have to manage that addiction every single day. As much as people want you to stop, you’ve got to hit rock bottom before you can turn things around and make that decision for yourself.”

For Brad this moment came when one of his colleagues, Mark Pilgrim, had a heart attack in 2008. “Back then Mark was one of the fittest guys I knew and I was grossly overweight, so I thought I’d better get to a doctor to see what the damage is.” His fears were confirmed when he was told his blood pressure and cholesterol were out of control. The scale used to weigh patients only went up to 150kg and simply said “Error” when Brad stepped on it, incapable of registering his 165kg. He was placed on medication to improve his blood pressure and cholesterol and his doctor told him to start exercising, or else. Things went well for about a month before it started fizzling out and Brad had once again put on more weight.

Then, in 2009, just after the Comrades, he had a meeting with a client who was wearing a Comrades T-shirt and limping a little, so naturally Brad thought the limp was from Comrades stiffness and blisters. He was blown away when his client told him the limp was from a stroke he had seven years earlier and that he only decided to do the Comrades while he was stuck in a wheelchair after the stroke. “I went home and thought to myself, if someone who was in a wheelchair can do the Comrades, surely I can do it in my condition. I knew if I didn’t do something I wasn’t going to make 40, so I went home, found my local Run/Walk for Life, called them up and joined. You can imagine how they looked at me when I arrived the next day, weighing 165kg and telling them I want to do Comrades the following year. That day I walked around the hockey field three times. I made 900 metres and that was it, I was knackered.”

COMRADES COMMITMENT
But this time Brad stuck to his guns and decided he needed to commit publicly to running the Comrades in order to actually do it. “I’m one of those guys where if I don’t tell people I’m going to do something, I’ll chicken out. So I told everyone I was doing Comrades and committed. My mom was fighting breast cancer at the time, and I knew Pink Drive was one of the five official charities, so I went to Comrades and said I want to do the race as part of their celebrity challenge, but I want to run for Pink Drive. We started raising money and then it was even harder for me to chicken out. If I hadn’t done that, I don’t think I would have started Comrades in 2010.”

Unfortunately Brad’s mother passed away just two weeks before last year’s Comrades and he was unable to finish. “After the race I was gutted, my feet were bleeding and I was sore. That’s when I met John Hamlett and he told me if I committed right then to doing the Comrades again he would help me. I’d rather not say what I told him at that moment, but after I thought about it for a while, I agreed. He put me on a strict diet and gave me a training programme, and after picking the brains of a few friends who’ve done Comrades, I started again.”

Brad says it was a long 365 days knowing he hadn’t done what he set out to do at last year’s Comrades, but that made this year’s race so much more rewarding. “I never once felt I wasn’t going to finish or found myself looking for a bailer’s bus. But it was tougher than I thought it would be. I thought with my experience from last year it would be better, but the race only starts at 70 to 75km. The best thing about the race was the finish. I was sore coming onto the grass, but then all the pain just disappeared. That feeling was awesome, I can’t really put it into words. For the moment things have gone full circle, but I will be back next year to finish the ‘down’ race, because I have unfinished business there.”

BECOMING AN IRONMAN
Comrades wasn’t Brad’s only achievement in 2011, however. He also became an Ironman in April, something that was never part of the plan. “My brother did Ironman in 2010 and he was the one who got me fired up on that side of things. After last year’s Comrades I wanted to do some cross training to lose more weight and improve my strength, so he suggested I do some Olympic distance triathlons with him.” Brad did his first triathlon in November and kept graduating to longer distances until he attempted the full Ironman. “I had an awesome Ironman and think the fact that I was more focussed on Ironman this year helped me at Comrades.”

Brad enjoyed the Ironman experience so much that he says he will probably go back and do many more of them. “Training for Ironman is way tougher than training for Comrades, but on race day, compared to the Comrades, Ironman is a doddle. Comrades is in a class of its own in terms of toughness. I have to go back and finish the ‘down’ race because I messed it up last year, but I can’t see myself doing 10 of them. It’s sore and I don’t think it’s healthy. I can see myself doing lots of Ironman races, though. It’s not as taxing on your body.”

INSPIRING OTHERS
While travelling with the Comrades road show earlier this year, Brad realised he can be an inspiration to other people and get them moving. “I’m very grateful that I managed to turn things around before I had a heart attack or damaged my body permanently, but I’ve been lucky to be able to inspire a few people because they can relate to my story. The most important thing that people should realise is that anyone can turn their life around. You don’t have to run the Comrades to reap the benefits of running. Just walking briskly four times a week for 30 minutes will already make a difference. The first step, getting out there and doing it, is the hardest, but I think I’ve proven that anyone can do it, because if I can do it, anyone can! I want to help people get started with their training and at the same time create a culture of doing a race for charity. When you look at the London and New York Marathons, the amount of money those people raise is massive and I would love to instil that kind of culture in South Africa.”

He’s already well on his way to doing this and was the brains behind the CC seeding batch where runners could start the Comrades in a special seeding batch toward the front of the field if they raised R5000 for one of the official charities. “I think we raised about R700 000 this year and laid the foundation to do it even better next year. There were about 100 people in that batch, which I think was pretty good for a first time. I have a few good ideas for the future and the CMA can expect my call soon.”

As for the immediate future, Brad’s next big project will probably be at the 94.7 Cycle Challenge, where he is thinking of attempting a triple challenge, something that has never been done before. This means he would have to do the route twice by the time the last batch of cyclists start their race and then do his third loop with the last batch. More Ironman races are also on the cards, and he wants to lose another 20kg before next year’s Comrades, to avoid serious blisters on the ‘down’ run.

Brad is the first to admit he doesn’t know everything about training and losing weight, but he knows what has worked for him and is sticking to it. “Running has made me mentally stronger, especially the long races. I used to get overwhelmed by a big challenge, but I’ve learnt to break things down into manageable bits. If you take care of the little bits, the big bits take care of themselves.”