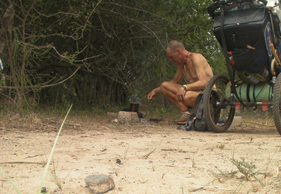 Standing at Cape Agulhas on 1 October 2010, I wondered what I was getting myself into. I said my farewells to the small group of family and friends, and set off with Mount Kilimanjaro in Tanzania as my destination, crossing through five countries and an estimated 5000km. My aim was to run at least 42km per day with a rest day every six days, to raise R300 000 for the Ethembeni School in KwaZulu-Natal, The Kidney Bean Trust and the Asha Trust. In the end I covered 6034km – a lot further than I expected – and still finished with the Kilimanjaro Marathon, then climbed Kilimanjaro with my brother Stephen.

I carried my life in my three-wheeled baby jogger pram. I had a foam mattress, sleeping bag, tent, gas cooker, bagful of clothing, bagful of food, lots of water, and what I called my treasure bag, containing my camera and GPS phone, cables, chargers and anything that was of value. I also had money hidden in numerous places – inside socks, between papers, even inside the frame of the pram. However, I was never really worried for my safety from a people point of view; it was the wild animals that were a bit of a challenge. I was always cautious, especially when setting up camp in the bush.

SETTING OUT
On day one, I ran a brisk five-hour 42km to Bredasdorp with Stephen and my Edgemead clubmates Rob and Kathleen Corb. It felt easy, we chatted, and the running was awesome… but from day two I was on my own. It rained, it was muddy, and I hurt my Achilles. Still doubting this expedition, I thought to myself: “What the hell am I doing here?” But every day the hospitality of the South African people was fantastic, which made it easy to keep going. I stayed in guesthouses, hotels, in private homes, old-age homes and anything resembling accommodation, and I never took my tent or my sleeping bag out once, and used very little of my supplies, in the 2350km through our country.

Amazingly, I did not suffer from any kind of muscle stiffness. However, I would run my 40-45km in the day, arrive at a place to stay, have a quick meal, sleep for four hours, wake up to have supper and then sleep for another 10 hours. I think that in the beginning, people assumed I was just bad-mannered or impolite, as I barely spoke with the people who offered me accommodation and food. Simply put, I slept, ate and ran. There were occasional breaks in between to chat to someone on the road who stopped to ask where I was going, but mostly I just enjoyed the long open roads.

In Willowmore, I was fortunate to stay with Jane and Ian Simon for a rest day. They welcomed me into their home, even though it was Jane’s birthday, and not only fed me, but even gave me books to read. It was the first time I realised just how far people would go to assist me. The same thing happened when I stayed with the Theron’s in Graaf Reinett, who organised numerous farms for accommodation further along the route.

FROM ZIM TO ZAMBIA
I will never forget the first of December, crossing the Beit Bridge into Zimbabwe. That first night I stayed with Mr ‘Big Boy’ Goro on the outskirts of Beit Bridge, my first experience of living in a township. The water only came on at certain times of the day, and the electricity was off most of the time, but I was made as welcome as anywhere in South Africa. The following day Mr Goro didn’t want me to leave on my own, as he felt that the first 40km outside of Beit Bridge could be dangerous. He wanted to follow me, but I thanked him and told him I would run on my own. He didn’t say much about this, but about 20km into the run I noticed that a white minibus was following me, which turned out to be Mr Goro keeping an eye on me.

One of my worst days was on day 66, in Zimbabwe, when I couldn’t find a place to sleep or to camp. It was getting dark, and I was feeling lonely and afraid, when I was saved by a woman called Eunice, who let me sleep in her store. Luckily it got easier the further I went in Zimbabwe, going from sleeping in my tent to huts, schools and villages, to once again sleeping at farms, guesthouses, hotels and eventually the Lamagondi Lodge at Kariba.

When I crossed into Zambia on Christmas Eve and I knew I had a big day ahead of me from Lamagondi Lodge to Kariba and then on to Chirudnu, which ended up being 92km. That day was so hot, my jelly babies turned to liquid, and the tar on the road got soft. I had no choice but to push on until, eventually, after leaving in the dark that morning, I reached Chirudnu that evening. Thankfully, a banana farmer named Vic found me and invited me to spend Christmas Eve with his family.

Zambia was probably the hardest country to travel through. I ran in 40-degree heat, constantly battling not only the heat but also the myriads of flies as I covered distances of 40, 50, 60km a day. However, one highlight was when the manager of the Lusaka Southern Sun gave me three nights’ accommodation and flew my wife Samantha up to stay with me.

TAKING STRAIN
Crossing into Malawi was different, because the people seemed to speak less English than in Zambia. I spent most of my nights in churches or schools, or camped in my tent. Malawi was also different in that I had to approach the heads of villages and ask for permission to camp in their villages. The pram was performing awesomely well, but I did have a problem when the handlebars snapped one day – I think I was a little overenthusiastic when ramping over some rocks. However, a farmer helped me with a temporary fix involving pieces of wood fitted inside the aluminium tubing, with duct tape holding it all together. This makeshift fix lasted right to the end of the run, another 1500km.

A big highlight was reaching Lake Malawi, which was beautiful, perfectly calm and perfectly clear. However, by this stage I was starting to feel really ill. On my last day in Malawi, I headed off towards the border, 50km away, expecting to see villages and shops along the route where I could buy some food and water, but I found nothing. When I reached the border post, I was seriously dehydrated, so I attempted to exchange R60 worth of Malawian Kwacha for Tanzanian Schillings, only to be swindled and received just R6 worth of Schillings. I was so dehydrated, I didn’t care. All I wanted was something to drink…

END IN SIGHT
The following day, I pushed on and was fortunate enough to spend the night at Rob Close’s avocado farm and the following night in Bayer with Rob and his wife. Then I met Mark Nightingale, who had walked across 16 countries for personal pleasure. I needed this inspiration, because soon afterwards I fell sick with dysentery. I was nauseous, had diarrhoea and my urine had turned a dark red plum colour. I didn’t think I was dying, but it certainly felt like it! Fortunately, I met up with two Americans who gave me some medication, which really helped.

Then my spirits were revived when I received a phone call from the organisers of the Kilimanjaro Marathon in Moshi to say that if I was there by the 25th, they would give me an entry in the race, which was on the 27th, as well as a couple of nights’ accommodation. So I started doing up to 70km a day and went 15 days in a row without a break. Things became quite intense, as I was covering large distances despite being quite sick. The rate at which I was losing weight was astounding! Despite this, I was having the time of my life.

By the time I arrived at Moshi, I was down to 71kg from my normal 93kg. I looked and felt awful. Then the Kilimanjaro Marathon day arrived, a beautiful day with the snow-capped Kilimanjaro peak in the background, and I ran with Matthew from Durban, whom I had only met I7 minutes prior to the start of the race. With the marathon complete, I had done 6034km in 150 days, of which 122 days were running at an average of 49.86km per day.

My brother Stephen then joined me on the 2nd of March and together we made our way up Kilimanjaro. We did this in six days and it was surprisingly easy – some of the running was far more difficult than the climb! Stephen had been with me on that first day of my journey, and it was truly incredible and heart-warming to have my brother with me on this last leg. It was just unfortunate that my other brothers, David and Grant, could not also be with us.

LOOKING BACK
The journey had emotional highs and lows, triumphs and trials, but now that I am home with Samantha and my two sons, I do not regret any of it. If anything, I have learnt to value what really matters in life. I have learnt patience and not to complain about things that are not worth the effort.

What stood out for me was the generosity and hospitality of the people all over Africa. I met so many unusual, interesting, gracious and kind people. I will remember this journey and recount the tales of hardship and woe, exhilaration and great fondness for years to come. It was truly an awesome experience!

Cape to Kili by the Numbers
As runners, we like to know the stats and figures, so here is a quick breakdown of Richard’s 6000km trek.