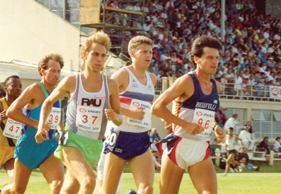 At the end of 1988 Jean Verster headed back to South Africa after five highly successful years at the University of Nebraska. He had loved studying and running in the USA, where he says each meet was like a mini World Champs due to all the top international athletes competing in collegiate meets at that time, and he only came back because his NCAA eligibility had expired. That meant he was no longer allowed to compete anywhere in the country, due to South Africa still being banned from international sport.

“The NCAA only allows athlete to compete for a maximum of five years, and the day after my college eligibility expired, I literally went from being the university’s star runner to not being allowed to step onto the track, not even to train! South Africa looked about to get back into international sport, but I came home because there was no sure indicator of when this would happen.”

Returning to local action, Jean decided to go after the national cross-country title, even though 12km was a bit long for a 1500m/3000m specialist. “There were so many great runners in South Africa back then, from middle distance right up to the marathon, and cross-country was where they all came together, so doing well in cross-country was a big achievement.” He had a really good run in the 1989 SA Cross-country Champs in George, finishing second behind Lawrence Peu and earning Springbok colours, and then he went to Germany for a year to try break into the international scene, but he was still not allowed to compete and came home again. That saw him running the 1991 SA Cross-country Champs in Cape Town, this time taking the national title. “Everybody was there! Mathews Temane, Xolile Yawa and all the other big names of that era, and winning the title was so great, especially for a track specialist like me.”

IN FROM THE COLD
The following year saw South Africa back from the sporting wilderness, starting with the African Unity Games and then the African Champs in Mauritius. “Now that the international door was open to us, many of us wanted to get to Europe as soon as possible, so we flew straight there from the Mauritius champs. I went to Frankfurt in Germany with Philip Spies, Corinne van Niekerk and Francois van Rensburg, to get ready for a meet two weeks later, but our first night there, the German athletes we were staying with asked if we wanted to join them in another meet the very next day. As far as I know, we were the first South Africans to officially compete in Europe post-isolation. It was an amazing time, because we were the flavour of the month. We received fantastic treatment and were paid better as well, because all the meets wanted South African athletes.”

Even though he felt his best years were behind him (1988-90), Jean won a number of races in Europe over the next five years, including several high profile cross-country races. He was selected for the 1992 Barcelona Olympics, but had to withdraw because of injury. However, he did make it to the World Cross-country Championships in 1993 and 1995. “I was very fortunate to at least have some international career, despite my injury problems. Many of our greatest South African athletes never had that opportunity.”

In 1994 he married Alta Lohan, herself a multiple middle distance SA title holder with national colours in cross-country. “Our honeymoon started with a week of training in the Drakensberg, and then we went to Europe to run cross-country. With South Africa back in world sport, we put off having a family until later. That’s why our first daughter was only born in 2003, with the second following in 2006. It still feels a bit funny to have toddlers in the house at this late stage of our lives!”

ONE ROAD ENDS, ANOTHER BEGINS
In 1998 Jean decided to try his hand at the marathon, and went to the USA to train with Josiah Thugwane and Zithulele Sinqe. Showing great form, he was invited to run as a pacesetter in the New York Marathon, and sponsored by a well known brand to run in their kit. Unfortunately, that proved Jean’s downfall. “I took them through halfway in 64 minutes, but pulled off at 23km with a sore Achilles, because I wasn’t used to the new shoes. Then a week later I was running a cross-country race in France and the Achilles tore. That was the beginning of the end of my career… I had planned to run the 1999 London Marathon, and people reckoned I could run at least a 2:12, but I never got the opportunity to try, and have still never completed a marathon.”

Jean returned to South Africa for treatment, but admits that he is terrified of doctors and hospitals, so put the recommended surgery off and just rested the Achilles. “I was out for 14 months and it actually healed by itself, but I kept picking up other niggly injuries. I tried a comeback in 2001, but now I was finishing 15th or 20th in European races I had been winning just a few years before. So I called it quits and focused on coaching instead, which I had begun doing while injured, with 800m Olympic silver medallist Hezekiel Sepeng my first star athlete.”

SUNNY SOUTH AFRICA
Now 46, Jean is currently the manager of the FNB High Performance Institute for Sport at North-West University in Potchefstroom, where he also coaches a highly talented squad of middle distance athletes. The university regularly hosts many top international sportsmen and women, and Jean played a leading role in developing what he now describes as a mini industry for the town.

“After my year training in Germany in 1990, I invited my European friends back to South Africa to come train with me in Sasolsburg during their cold winter months. Word of mouth spread and more athletes starting coming here because of the great weather and training facilities, and many followed me to Potch when I moved there. Then in 2008 I was approached by the university to run the High Performance Centre. Now we regularly have more than 1000 foreign athletes using our facilities, from up to 36 countries and from all sporting codes, and we also hosted the World Cup-winning Spanish soccer team last year.”

GIVING BACK
Jean is currently playing a leading role in South African athletics administration, serving on the USSA (student) and North West North provincial Execs, as well as being Vice-chair of the ASA Cross-country Commission. “There is so much work to do to get the sport to where it should be. I think the old ASA did some things well, but others were neglected, notably coaching structures. I think once we look at that, a lot of other areas will also see improvement.”

“I also think we need to address why we are not delivering the same depth of talent we used to have in the 70s and 80s, so we’re looking at ways to incentivise athletes to stick to track and cross-country, with a cross-country circuit being suggested as well as a top level 10km road series. That way our top athletes won’t just run long road races each weekend for small prize purses, or move up to ultras when they are still young.”

UNFINISHED BUSINESS
Jean still jogs three times per week, averaging 8km each run, and says one of his remaining running goals, besides keeping his fitness up and weight down, is to run a big city marathon with good friends like Arnold Geerdts. “We want to run New York or one of the other big ones together, just a nice social jog – but not too slow; we still want to run around three hours.”

But his focus is now on building the sport from beside the track. “I feel at home in the coaching and administrative role, although it is incredibly hard work. I’ve seen things from both sides, as an athlete and coach, plus I’ve been a race organiser and meet director, managed athletes, and also done TV commentary, and I think running is much easer, despite the hard training – and it’s much more fun!”

JEAN’S PERSONAL BESTS
Jean began running in 1977 and set many youth age group records, some of which he still holds, including a 4:04 mile when he tried to become the first 16-year-old in the world to run a sub-4:00 dream mile. He did go on to run a number of dream miles, and he still holds the senior SA record for the seldom run 2 mile distance.