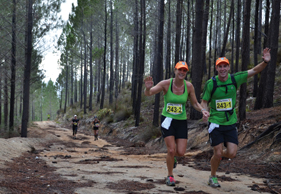 One of the plus-points of running as a sport and fitness activity is that it is easy to get started, you don’t need much equipment, nor expensive facilities, and it is an individual sport, so each person can determine their own training and racing levels. Running thus offers great ‘me-time,’ which attracts many people to the roads and trails. However, another great aspect of running is its camaraderie, where family, friends, clubmates, colleagues and even complete strangers can enjoy the time together, having a chat along the way and getting to know each other better.

From training together regularly, to entering races together, running can really bring families or couples closer – and even more so when they enter a three-day stage race that requires each pair of runners to never be more than two minutes apart, like the recent Pronutro AfricanX Trail Run in Kleinmond.

I’LL STAND BY YOU
One of the couples in the event, James Brown and Julia Goedeke, who have been dating for two years, really saw what teamwork and understanding meant when James had stomach problems on the second day’s 41km long stage, while Julia struggled with ITB on day three, which forced them to walk the entire 21km stage and eventually finish last team home on the day. It really looked like they had been brought even closer together by two days of hard survival mode running in the mountains above Kleinmond.

“Julie and I often train and run races together, so I suggested we run it as a team, but I wondered if we would still be ‘together’ by the end of the three days. Well, we started together, and we finished together,” said James, looking over at Julie. “She waited for me on day two when I was ‘looking in the bushes’ all the time, so there was no way I was going to leave her behind on the last stage.”

Another great couple performance was that of husband and wife team Ian and Sue Don-Wauchope, who dominated the veteran mixed team category and finished second overall amongst the mixed pairs. Both are recognised trail running elites, but Ian had struggled with a virus in the lead-up to the race and was not feeling as strong as usual. Sue took over to set the pace and pull Ian through when he took strain – despite being woken up several times each night by their young baby. At the event prize-giving, Ian still commented that he felt guilty about her getting up so often after all the hard running, and offered to help, but she kept telling him to rest.

MOTHER-DAUGHTER TIME
Parents and their children can also forge stronger bonds by running together, and the AfricanX had several two-generation teams, including Team Rockies Chicks and Team Winter Farmers. The Rockies Chicks, were a mother-daughter combination of Simone and Kimberley Bishop of Johannesburg. Simone has done four 250km extreme events in Chile, China, Australia and Antarctica, and her next big one will be the Gore-Tex Trans-Rockies in the USA in August, another pairs race. Her daughter Kimberley, who is currently studying at the University of Cape Town, decided she’d like to join her mother in the Rockies, so Simone told her she’d have to prove she could handle it. Cue their entry in to the AfricanX, which covered about 88km in three days.

“I told Kim she needs to prove herself in a local race before I’ll let her go with me. This race was good training for us both, but we ran it mainly to see if she can keep up with me, and whether she has the temperament for it – and if we can stand running with each other for five days! It went well, wonderful mother-daughter bonding time, so we’re all set now for the Rockies.”

Team Winter Farmers – Trish and Candice Winterboer, from Empangeni and Cape Town respectively – usually run a race or two together whenever they see each other, but this was their first multi-day event together. “It works well when we run together. We don’t fight, we don’t stress, and if we do well it’s a bonus, but running behind Candice and seeing how fleet-footed she looks makes me feel like an elephant!” said mom Trish.

START SMALL
Of course, you don’t need to enter a three-day mountainous trail event with your partner, parent or child to experience the bonding benefits of running together. Here are a few simple ways to get the whole family running:
• Using baby-joggers: Nowadays, even the youngest children can be included in a family run or jog, and one parent does not need to stay home while the other trains. Modern, lightweight baby-joggers are both comfortable and safe for the child, and easy to push and navigate by the parent, with brakes, a stable chassis and even rugged tyres for off-road use.
• Run and bike: By using a combination of two wheels and two legs, the whole family can venture out together. Mum and dad can run while the children cycle, or perhaps vice versa, or indeed any combination of running and cycling between family members.
• Fun runs: Most races have an accompanying fun run, usually about 5km, and they’re a great way of involving every member of the family in the day’s running. There are usually medals for all finishers, so everyone will be happy.
• Orienteering: This is a great sport for the family. Events typically involve a range of courses of varying length and difficulty. There is very much a family atmosphere at orienteering events and everyone can keep fit and develop useful map reading and navigational skills at the same time.