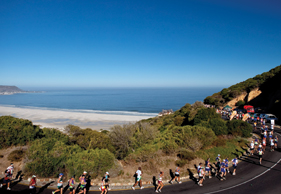 FIRST HOME WIN IN FOUR YEARS
South African George Ntshiliza produced a late surge to break the foreign stranglehold on the 56km Old Mutual Two Oceans Marathon when he came from behind to stun novice ultra runner Motlhokoa Nkhabutlane of Lesotho to storm clear with less than 1km remaining. Ntshiliza crossed the line in 3:08:31 to become the first local athlete to win the race since 2007. Three South Africans placed in the men’s top 10, an improvement on the single gold medal they picked up last year.

TWINS DOMINATION CONTINUES
Russia’s Olesya Nurgalieva led twin sister Elena to another one-two in the women’s race to strengthen their grip on South African ultra-marathons. Olesya took control of the race going up Constantia Nek and pulled away from her sibling to win in 3:33:58. Elena finished second in 3:37.54. Farwa Mentoor was the first local finisher in eighth position.

Lusapho April defended his men’s half marathon title in 1:03.58, and Helalia Johannes of Namibia held off South Africa’s Irvette van Blerk by eight seconds to win the women’s race for the fourth time, setting a course record 1:11.56 in the process.

RUN FOR GOOD
More than 4000 pairs of shoes will soon find their way onto the feet of some of the neediest learners in South Africa, thanks to the terrific support shown for the event’s official charity, the Bobs for Good Foundation. Bob Skinstad and his team are still finalising the final donations, but estimate over R205 000 has been collected, which Old Mutual will match as part of their ‘Do Great Things’ campaign, to give a total of over R400 000. This will pay for more than 4 000 pairs of shoes.

On race day, Bob and Ron Rutledge of the Bobs for Good Foundation lined up in the ultra alongside the legendary STIK, who had promised to get anyone who ran with him across the line before the final seven-hour cut-off. Sadly, after a heroic effort that saw him get all the way to Hout Bay, Bob just missed the cut off time and had to pull out of the race. Ron and the STIK pressed on, and made it home with just three minutes to spare.

ORDER YOUR PHOTOS ONLINE
Don’t forget to order your race day photos online. You can view and order your photos on the Action Photo website at www.actionphoto.net.

SEND YOUR FEEDBACK
Got a great story to tell from a special moMEnt on race day? E-mail your feedback and stories to stefanie@twooceansmarathon.org.za and you may see it on our website or in the next official magazine.

DIARISE 7 APRIL NOW!
Next year’s event will take place on Saturday 7 April 2012 – so put it in your diary and keep an eye on our website for when entries open.