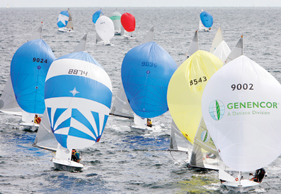 Mention the word sailing and most people envisage beautiful people sipping champagne on the deck of a luxurious yacht. However, every weekend many sportsmen and women set off to their closest dam, lake or ocean to race each other in much smaller sailing boats such as double-handed 505’s and Dolphins or single-handed Lasers, to name but a few.

It is in sailing boats such as these that Rudolph Holm has achieved considerable success as a sailor, winning several provincial and national sailing championships and representing South Africa in countries such as Denmark, Germany, Sweden and Australia. Last year he placed 17th at the Danish Championships with his brother Ferdinand, but Rudolph says he spends more time in the single-handed Laser, which is why running is becoming more and more important to perform well on the water.

REGATTA RUNNING
Rudolph explains that running forms an important part of his training and preparation for sailing, and it is also crucial in recovery during and after a regatta. “Sailing regattas are normally hosted over at least two days, with six or more races making up the event. One race is usually at least 45 minutes, so you need significant physical and mental endurance to perform well at a regatta, something that running is crucial in building. Anyone can complete most of the races, but it’s the fitter ones with greater mental stamina, who are able to concentrate for longer, that come out on top.”

“Furthermore, sailing is mostly an isometric exercise where the muscles are under severe pressure, as there is little movement in your arms, legs and core when you’re hiking out to keep the boat flat, especially in a single-hander such as the Laser. You’re often in a static position for a long time, leaving you with high blood pressure, poor circulation and acid build-up in the muscles. So some light running after a day’s racing not only helps speed up the recovery process, but also improves blood circulation while working on the boat.”

When training for a big event Rudolph says he tries to be on the water at least twice a week, amounting to four to five sessions of about 2? hours each. However, this is mostly limited to weekends, so during the week he relies on running, which helps to improve his physical and mental fitness. “I run about 25km a week in three to four sessions that will last up to an hour per session, but mostly I do shorter, hilly runs after work.”

THE FUTURE
On the water his immediate goal is to achieve a top three position at the South African Championships in the Laser, but he says this is quite a challenge because there are a lot of good youngsters and other championship winners in that fleet.

On the road, Rudolph says something like the Comrades Marathon will have to wait for a few years because he will have to take a break from sailing for about a year to train. “I’ve run 15km under one hour, so maybe a 90-minute half marathon is possible one day, but the Comrades is definitely on my bucket list!”