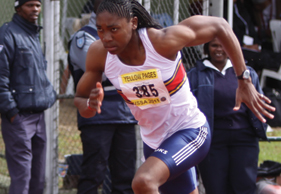 The story of Tuks athletics goes back nearly a century after the club was founded in 1918. The university produced its first Springbok sprinter, Werner Gerhardt, in 1930, and their first Olympian sprinter, Abraham van Heerden, in 1948. Since then, numerous Springboks, national champions and two world champions have hailed from the University of Pretoria. Olympic medallists from Tuks include 800m athlete Mbulaeni Mulaudzi, 400m hurdler Llewelyn Herbert and long-jumper Khotso Mokoena.

Other big names include hurdler LJ van Zyl, who broke the 11-year-old national record in the 400m hurdles earlier this year and is on track for a medal at the World Champs in August, while Caster Semenya is slowly regaining the form that saw her crowned World Champion in the women’s 800m in 2009. Sprinter Oscar Pistorius and discuss thrower Elizna Naude are two other athletes carrying high hopes for the World Championships later this year and Olympic Games next year.

Since the turn of the century Tuks has featured in the top three of the South African Student Athletic Championships (USSA’s) every year and 2011 was no different. The university finished second overall in the team competition at the recent champs meet in Stellenbosch.

Club manager Hennie Kriel says one of the reasons the university continues to attract top athletes and perform so well is because of the quality of its coaches. “Everyday we have between 10 and 15 top coaches on our track, which includes six coaches for sprints and hurdles alone. The opportunity to train with athletes such as Morn? Nagel and Geraldine Pillay is reason enough for any prospective champion to join our club.”

Add to this a new synthetic track, a close working relationship with the High Performance Centre and the newly established Tuks Sports School, and it is a promising prospect for many young and upcoming athletes such as long-jumper Mpho Maphuta, national junior champion Rikenette Steenkamp (sprint hurdles) and Jacques de Swart (400m).

Tuks boasts a proud tradition of being an athletic powerhouse in South Africa, as indicated by their tally of medals at the national senior championships earlier this year. Out of a possible 44 gold medals that were up for grabs, Northern Gauteng took 20, and 18 of these went to Tuks athletes, which means that almost half of all the golds went to one club! That’s a feat that will be hard to match by any other club.