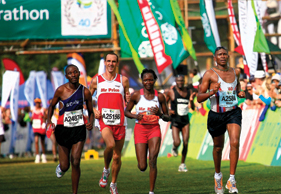 When Ludwick Mamabolo lined up in Pietermaritzburg last year he was a Comrades novice, yet he still came close to dethroning Stephen Muzinghi as he finished in second place, a mere six minutes behind the winner. This year he will be back with more experience and more confidence, and with the change of direction it could just be Ludwick who crosses the finish line first and takes the title for Mr Price. He ran 5:35 last year and his preparation for this year has gone smoothly, so he is definitely someone to look out for.

His teammate Bongmusa Mthembu was third at last year’s Comrades with a personal best time of 5:37. On top of this, he had a strong showing at Two Oceans in April. He’s only run the Big C twice but has improved every year and will be another big threat at this year’s race, even though he hasn’t run the ‘Up Run’ yet. A more experienced teammate is 39-year-old Fusi Nhlapo, the 2003 winner of the race who now has nine gold medals under his belt. Fusi will not only be looking for that 10th gold, but will be very eager to show everyone that he still has plenty of running in his legs.

The most experienced of all the Mr Price runners will be Poland’s Jaroslaw Janicki, who will be looking for his 13th medal. He already has five golds, finishing second in 2008, and although this was the last year he was able to finish, his participation in the race is sure to make things interesting.

FEMALE DOMINATION
The Russian Nurgalieva twins have dominated the South African ultra-marathon scene for the past eight years in much the same way that Bruce Fordyce dominated our roads in the eighties, and after another one-two finish at this year’s Two Oceans, it doesn’t look as though they will be dethroned anytime soon. If things follow the pattern that has developed between the two sisters over the past five years, it should be Olesya’s turn to take top spot this time around, but the big question will be whether one of them will be able to improve Elena’s record on the ‘Up Run’ after running downhill the past two years.

Their compatriot Marina Myshlianova took the last place on the podium last year, making it an exclusively Mr Price top three, and she will hope to stay close to the twins again. South African Riana van Niekerk (6th in 2008) and Zimbabwean Samukeliso Moyo (novice) complete women’s line-up and local supporters will hope they can add some African flavour to the podium.