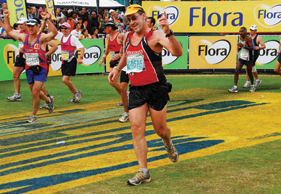 Reiner Stuckey 34616
Age: 51 Club: Volksrust
Comrades run: 14 (plus 1 DNF)
2010 time: 10:53:44
My 2011 Goal: I want to run a sub-10:30 for another bronze. I’m a bit old school, so if you don’t finish within 11 hours, you haven’t done it, and that’s why I loathe the copper medal. I have two of them, but usually hide them away! I’m very much a social runner, so for me it’s all about the spirit of the Comrades. It’s one of the most beautiful races in the world, and you just don’t get that same camaraderie anywhere else – that’s what makes it special and what keeps me coming back year after year.

Donna Lee Meyerson 31014
Age: 38 Club: Run/Walk for Life CG
Comrades run: 0
2010 time: N/A
My 2011 Goal: All I want is to finish. I’ll take any medal, even a Vic Clapham. I actually bought an Ipod the same colour as a Vic Clapham, and when I registered it with Apple, I called it the Vic Clapham! I’m so excited about running, because it’s been such a mission to get there. I ran a PB in Maritzburg but didn’t make the qualifying time, then another PB at Cosmos but still didn’t qualify. I almost gave up, but then it was third time lucky at Elands Valley! After all that, even if I only get to halfway, I’ll look at it as experience for next year.

Nikki Campbell 18595
Age: 48 Club: Fish Hoek
Comrades run: 13
2010 time: 10:25:21
My 2011 Goal: My aim is to run under 11 hours, and to have a comfortable day out on the road. I’m addicted to the Comrades. Since I ran it the first time, I haven’t missed a year – there is no other place I would want to be other than the road on Comrades day. I want to keep running the race until I can no longer run. It’s a journey, not a race. It’s one day a year that I can be a hero for a day, not because I’m going to win it, but because the supporters on the side of the road that see this ordinary person doing this want to be me.

Daryl Heffer 22141
Age: 34 Club: Westville
Comrades run: 1
2010 time: 8:49:44
My 2011 Goal: My training has gone alright, but we’ve got one-year-old twin boys, which means that I couldn’t always go train as planned. With it being an ‘Up run,’ it’s like doing a new race again this year, so I don’t really know what to expect. I’d like another Bill Rowan, but I haven’t set my heart on it, and I’ll be happy with anything under 10 hours. I had a terrible run at Two Oceans was just a few weeks ago, cramping at the marathon mark, just like I cramped last year in Comrades, and I think I have this barrier in my mind to get over around 50km.

Go to our Facebook page www.facebook.com/modernathletemag and catch up on more Comrades goals of Modern Athletes countrywide.