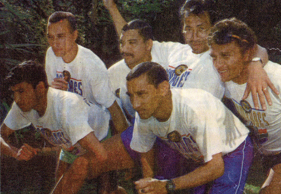 When I was a child our community of Riverlea was ridden with alcoholism, drug abuse, gangsters and poverty. We had a lot of fun playing street games and chipping golf balls in our backyard, but growing up we were threatened by the malfunction of society. It was then, as a little boy, that I prayed to God to keep my brothers safely together.

I enjoyed sport at school and during my teens I decided to make my life meaningful and be a good example to the community. I knew this would not change the entire neighbourhood, but in later years it would rub off on others. I was introduced to the running scene by Frank and Tony Richardson from the Rand Athletic Club and for the first time I was educated on all things running. I loved it!

In the heydays of Apartheid, it was a struggle getting to road races, as most transport was for whites only. I didn’t know about a road atlas and there was no such thing as GPS, so I always asked for directions from people at my workplace, often getting lost on my way to a race and even missing a few. My first Comrades in 1981 was riddled with transport and accommodation problems, but I managed to get to Durban and back to Johannesburg in one piece after finishing.

BROTHERS IN ARMS
As my collection of medals grew, my brothers became interested in the sport and eventually we were all running! In 1995 and 1997 all six of us finished the Comrades Marathon and as far as I know we are still the largest group of family members to finish the race in one year. We were close throughout our lives and I was thankful to God that he had answered my childhood prayer and we were safely together.

Today four of the six brothers have received their green Comrades numbers. Between myself (19), Lennie (13), Tony (15), Paul (12), Wayne (9) and Derrick (7), the combined tally of Comrades medals stands at 65. My brothers are planning on increasing this number even more.

A RACE OF A DIFFERENT KIND
I stopped running in 2002 after several bike and motor accidents, but last year I decided to attempt my 20th Comrades. Unfortunately, this was not to be, as I was diagnosed with cancer in late April. Since then I have been involved in a race of a different kind.

In May and June last year I received radium treatment, but it was unsuccessful and I had to undergo chemotherapy. The radiation was exhausting, but after being on chemo for three months I can say it is the worst medical treatment one can experience. It has been physically exhausting, financially costly and spiritually draining. It is also trying being terminally ill, bed-ridden and unemployed while everyone around you is still in good health.

Despite this suffering, I see this experience as a blessing. I’ve learnt to love my family, and people in general, with the love of God, appreciating them more than ever. My family and the community have all been wonderful in their love and support. Through all of them, I am able to encourage others to believe and fight cancer. Stand and fight!

FIGHTING CANCER
Running has strengthened me considerably over the years, both physically and mentally, and today I can say I am a fighter against cancer in the same way that we have to fight to conquer the valleys and hills of the Comrades Marathon.

Through my fight against cancer, I have come to realise that life is a cycle where you’re at the top one second and the bottom the next, but ultimately you keep moving forwards towards the finish line, just as in Comrades. If you have a crisis at work, home or in your sport, you should not be afraid. Run your life race well and the Almighty will give you a crown of glory and scoop you up and carry you to the finish line when you cannot finish. Don’t be downcast by obstacles, but overcome them!

This year three of Alvin’s brothers will be running the Comrades Marathon once again. Derrick, Wayne and Paul, together with Paul’s wife Faith and their nephew Neilan (Tony’s son) will be lining up in Durban on 29 May, once again dedicating their run to Alvin. Wayne will be going for his green number and his first silver medal this year, but ultimately the entire family wants to keep on paying tribute to Alvin for uniting them in running.