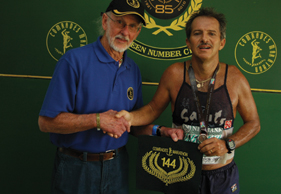 In 1983 Bruce Fordyce won his third Comrades Marathon in a record time of 5:30, but this year’s finish will forever be remembered for the manner in which the last gold medallist finished his race. When Colin Goosen entered the stadium in ninth position his legs simply did not want to carry him any further and he collapsed twice inside the stadium. It took him three minutes to finish the last 500m and he was overtaken by another runner to eventually finish in tenth position. By the time he crawled over the finish line, everyone who was watching was close to hysteria, urging him over that final threshold. This image of a top runner desperately crawling to gold captured the imagination of the country and encapsulated the spirit of the Comrades Marathon in one epic moment.

The man himself still remembers that day like it happened yesterday. “I had a lot of self-belief and thought I could win the race, but my exuberance and youth got the better of me and I went out way too fast, reaching halfway in 2:47! In the last 20 to 30km, I was so out of it I didn’t know where I was or what I was doing. I didn’t even recognise my wife. I fell for the first time about 5km outside the stadium and when I ran into the stadium my legs gave way again, but I managed to get going again. I knew I was in a good position but didn’t know exactly where I was placed, and when I fell again about 30m from the finish line I realised I was going to get there faster if I just crawled on all fours. I just wanted to get to that finish line and only heard afterwards that the next runner was about seven minutes behind me, so I could have taken it a bit easier!”

The perseverance, determination, hard work and pain that go hand in hand with participating in the Comrades were all encapsulated in that one moment. But for Colin it only confirms that there is no such thing as giving up. “You must never think you’re beaten. You never know how it’s going to end and must keep on going, no matter how tired you are, until you reach the finish line. We don’t realise just how much our bodies are capable off.”

A LONG COMRADES HISTORY
What makes Colin’s gold medal even more incredible is that he only started running three years before winning that gold. It all started when he left the air force to further his studies. His mates told him he would never be able to run the Comrades, so he set out to prove them wrong. That was only two months before the race, but he finished 57th in 6:25. “Long distance running didn’t really feature as a sport in high school, so I only discovered at Comrades that I had talent. I have my parents to thank for my genes, because I have always been fairly light and have a natural running gait. Running changed my life – up till my first Comrades, I was always a wild child. It gave my life direction and has helped me immeasurably in my personal and professional life.”

After that first Comrades the deed was done and Colin was hooked. The next year he returned, this time going for the win. “I trained helluva hard and thought I’d win it. About two months before the race, I got shin splints, but I simply slapped on some cortisone and ran anyway. Things went perfectly until I reached Cato Ridge and I couldn’t put one foot in front of the other because of the pain. I basically walked the rest of the race and finished in 9:22. I learnt a lesson that day to never try and run with an injury!”

Colin went back every year after that and added 24 silver medals, two Bill Rowans and three bronze to his gold. His tally of Comrades medals is certainly one of the most impressive, and though he has slowed down a little since his early running days, he still ran a 7:28 last year at the age of 50. This year, he says he’ll be taking it ‘easy’ and is only aiming for a sub-8:00. “My single greatest achievement is probably the gold medal, but it is a greater achievement that I’m still enjoying running as much as 30 years ago. I’ve never ever stopped running since I started and still love every minute! My family regularly tells me I’m crazy for carrying on running, but I want to finish another 20 Comrades for a total of 50.” This means that if he stays injury-free, he’ll run his 50th when he’s 70 years old!

GOLDEN MEMORIES
In his long relationship with the Comrades, Colin has acquired some great memories along the road, and although the race in 1983 is special, he says one of his most memorable races was in 1997 when he ran with his wife to help her finish her first Comrades. “She’s always given me great support and I never thought she’d run a Comrades, but then she ended up doing 10! Of my 30 Comrades, the one I ran with her was by far the hardest, as we were on the road for 10 hours.”

Though he has a soft spot for the Big C, he has run countless other races, including 10 silver medal times at Two Oceans, more than 150 marathons (with a PB of 2:26) and at least another 100 ultra-marathons. Colin has since ventured into cycling and canoeing and has finished three Cape Epic races and a couple of non-stop Dusi’s with his children, but running remains his first love. “Running is special because you can go out for 30 minutes and feel like you’ve had a major workout, but you can also go out for four hours and never stop talking, unlike cycling where there’s no opportunity for banter. The banter between runners is a very important part of our sport and most people who have run with me will tell you that my mouth moves almost as fast as my legs.”

EXPERT ADVICE
Colin’s most valuable advice to all runners is to never give up. “I believe you have to finish what you started. Once you’ve bailed, that sets a precedent in your mind and you’re more likely to pull out of another event. Your body is capable of much more than you think. The best advice I can give to Comrades novices is if you feel you can’t keep going anymore, get a litre of Coke, sit down next to the road for 15 minutes and finish the Coke before you make a decision on bailing. A year is a long time to wait to make matters right, whereas to sit for 15 minutes is a lot shorter to get going again.”

Colin is a member of Saints Athletic Club in Pietermaritzburg and regularly helps other runners in his club to prepare for Comrades by helping them set realistic goals and preparing them for what they can expect. “Runners should have a clear plan for race day and should be realistic about the goals they set for themselves. Their goals should be based on their marathon time in the current year, not their marathon PB of four years ago.” For him, the most difficult part of the race is the loneliness at Harrison Flats and the realisation that sets in at this stage that you still have 30km to go. But he says this despondency is overshadowed by the wonderful atmosphere at Hillcrest and the feeling when you reach the top of Polly Shortts and know you’re almost home.

Of course the race has changed a lot since 1980 and Colin says one of the things he misses most is that you can’t have your own personal second any more. However, despite all the changes and no matter how many times he has done it before, Colin still gets nervous when he lines up on race day. “I still get goose bumps when they sing Shosoloza. When you’re standing there everyone is united and everybody has the same goal, it’s a wonderful atmosphere!”

“The Comrades is special to me, it’s the place where I realised I have talent and I would never have started running if it wasn’t for the Comrades. There are many ultra-marathons, but only one Comrades and it’s the one event where even if you’re not a runner, you still want to get involved. In South Africa, if you tell someone you’ve done a 2:30 marathon, they don’t really care, but if you’ve finished the Comrades, then you’re an athlete. It defines South Africans’ dedication and perseverance and our special relationship with ultra-marathoning.”