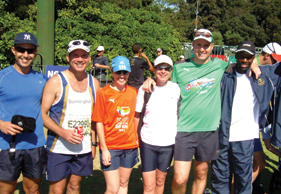 The 2011 edition of the Old Mutual Two Oceans Marathon saw 82 Sunninghill Striders enter for the ultra-marathon and 28 for the half in the club’s biggest turnout yet at this race. With a silver medal earned in both the half and ultra, Sunninghill finished the day with seven Sainsbury medals, 34 bronzes and 31 blues in the ultra and a total haul of 94 medals on the day, just six years after making their debut as a running club!

Special mention should be made of the debutants who completed their first Two Oceans adventure. These include six runners in the half marathon and 22 in the ultra, and after a fantastic day most of them were hooked, saying they’ll definitely be back next year if this is what the Two Oceans is all about.

“At Two Oceans 2012, we expect a bumper crop of both seasoned campaigners and eager debutants to make the annual pilgrimage to Cape Town and hopefully bring back more than 100 medals,” says club member Craig Murphy.