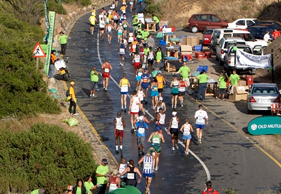 Eight of the top 10 men from last year’s ultra field have entered once again, as have seven of the top 10 women – many of them no doubt tempted back not only by the stunning course, but also by the greatly increased prize money on offer this year. This has also no doubt contributed to a large contingent of Ethiopian runners heading down to the Cape for the first time.

ULTRA CONTENDERS
Included in the men’s field are defending champion Mabuthile Lebopo of Lesotho, as well as his brother Warinyane (5th last year) and three other countrymen who finished in the top 10, Moeketsi Mosuhli (2nd), Teboho Sello (3rd) and Mpesela Ntlosoeu (8th), all of whom will be running for Mr Price. Another big name to look out for will be Stephen Muzhingi of Bluff Meats AC, the two-time Comrades Marathon defending champion, who finished fourth here last year – he may race Two Oceans again this year, but may also take it slightly easier to conserve his legs for the Big C, which takes place just five weeks after Two Oceans. The same could apply to 2010 Comrades runner-up Ludwick Mamabolo and Comrades third-placed runner Bongmusa Mthembu, both of whom will be running for Mr Price.

Also in the mix will be 2007 winner Bethuel Netshifhefhe (Bonitas) and 2006 winner Moses Njodzi (Mr Price, Zimbabwe), while an interesting name to pop up in the list of entries is that of Gert Thys (Mr Price), the SA marathon record holder who recently returned to racing after serving a ban for doping. He has unfortunately failed to finish several marathons in recent times, but if things go right for him on the day, he could possibly spring a surprise at Two Oceans. Other interesting names to look out for include several former Comrades winners, Bruce Fordyce and Shaun Meiklejohn (Nedbank), and Fusi Nhlapo and Sipho Ngomane (Mr Price).

In the women’s race, all eyes will be on last year’s top two, Olesya and Elena Nurgalieva, the Mr Price-sponsored Russian twins who have dominated the South African ultra-marathoning scene in recent years. Farwa Mentoor (Bonitas) will once again be expected to lead the local challenge, but it is likely she will also run conservatively to save herself for the Comrades, so watch for a challenge by South Africa’s Riana van Niekerk (6th last year) and Zimbabwe’s Samukeliso Moyo (5th), both running for Mr Price, while 2007 winner Madina Biktagirova of Russia and 2003 winner Simone Staicu of Hungary are also back this year.

Another medal hopeful is Two Oceans novice Marina Myshlanova (Mr Price), who finished third at Comrades last year, while an outside bet for a gold could be Gladys Lukhwareni (Transnet), best known for removing her shoes in the final kilometres of Two Oceans several years ago and then surprising the twins with a surge that almost caught them out. Gladys has not yet recaptured top form after serving a two-year suspension for doping, but could prove a surprise package this year.

HALF MARATHON HOPEFULS
In the 21km, six of last year’s top 10 men have re-entered, with Lusapho April returning to defend his title. He should face stiff competition from 2009 winner Stephen Mokoka (Transnet), who has been in scintillating form on road, track and cross-country courses in recent months, while another ‘dark horse’ to look out for could be local favourite and former SA Junior Steeplechase champion Anthony Godongwana (Celtics), who recently won the testing Tygerberg 30km race in Cape Town.

In the women’s race, five of last year’s top 10 have entered, including last year’s winner and course record holder Rene Kalmer of the Nedbank club. Other names to watch will be Irvette van Blerk, who raced clubmate Kalmer all the way to the line last year and also dipped under the old course record, and three-time winner Helalia Johannes of Namibia, while Annerien van Schalkwyk, Zintle Xiniwe and Christine Kalmer of Nedbank, Charne Bosman of Mr Price and Zimbabwean Tabitha Tstatsa could all feature as well.

Another two names to watch for in the half marathon will be the all-time favourites of SA road running, Frith van der Merwe (Run Walk For Life) and Grace De Oliveira (Boxer), both multiple gold medallists at Two Oceans and Comrades. They could put in a show for age category placings, and are sure to get a good cheer all along the course.

CHARITY DRIVE PUTTING BEST FOOT FORWARD
At the time of writing, just under R200 000 had been raised for the Two Oceans Marathon’s official charity, the Bobs for Good Foundation, with race entry auctions fetching an additional R56 000, all of which will go towards putting locally-produced leather school shoes on the feet of needy learners around the country. Taking this worthy cause still further, race title sponsor Old Mutual recently launched a new campaign that will see the financial services company match every rand donated by the public to Bobs for Good, in a quest to raise R1-million for the charity and to get everyone to run for more than themselves on 23 April.

FUN RUN ENTRIES STILL OPEN
Entries for the Old Mutual Two Oceans Fun Runs on Friday 22 April will still be available right up to race day. Taking place on the UCT rugby fields, where the ultra and half marathon events will finish the next day, there will be several distances on offer: A 56m Nappy Dash for children aged three and under, a 300m Toddlers’ Trot for ages 4 to 6, a 2.5km and a 5km. Entries cost just R20! Entry forms for these fun runs will be available at the Expo at the Good Hope Centre on Wednesday 20 and Thursday 21 April, and at the UCT rugby fields on Friday 22 April.

MEDALS AND MONEY
There will be a wide variety of medals up for grabs at the Old Mutual Two Oceans Marathon and Half Marathon. The medal breakdown is as follows:

Total prize money on offer for the event is just under R1.5 million, with the half marathon prize-giving taking place at 09:00, while the ultra prize-giving will start at 13:45.

TRACK YOUR RUNNER
Attention all supporters! For the first time at the Two Oceans, you can track your runner’s progress during the race, and it’s so easy. Simply SMS your runner’s race number to 38119 and you will receive messages each time your runner passes over one of the timing mats along the route, including the finish line. Register now for just R10 – one race number per SMS.

IMPORTANT PARKING NOTICE
With parking being a big issue on race day, keep in mind that four schools in the area are offering parking at R30 per car: Westerford High, SACS Junior, SACS High and Groote Schuur High. With Westerford and the two SACS grounds usually filling up quite quickly, the organisers are urging runners to consider using Groote Schuur, which is quite near the start. Take Liesbeeck Parkway from either Cape Town or the northern suburbs side, and simply follow the marshals and signage. There will be a regular free shuttle service from the finish at UCT to all the schools – officials at the Expo will have more details on routes and timetables. Most importantly: Arrive early and avoid getting stuck in traffic!