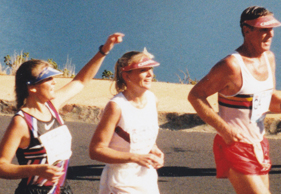 If you don’t know who Noel Stamper is, chances are you’ve never run the Two Oceans before, because Noel has become as synonymous with the event as Table Mountain is with Cape Town. Having run the very first Two Oceans and with 40 finisher’s medals to his name, he has seen the race develop from a pre-Comrades training run with an entry fee of just 50 cents, to the mammoth carnival weekend that it is today. But don’t think Noel has become blas? about the race; he says taking part still causes a few butterflies in his tummy.

EARLY DAYS
Having converted from rugby to running almost 50 years ago, Noel remembers those early running days fondly. “Those were the days when you ran in Bata tekkies or a pair of blue ‘Tiger’ road running shoes which cost R6.50 for the upmarket nylon model. I think the white canvass model cost R4.75. Big money then!”

In those days, Noel was a member of Celtic Harriers and working in sales and marketing at BP. When Dave Venter joined BP from Durban and became a member of Celtics, the two buddies decided to enter the Comrades Marathon. “I think we were the only two Celtics members who ran the Comrades in 1970. Dave was soon pushing for an ultra-marathon in the Cape, to train for the Comrades, and his efforts saw BP Southern Africa sponsor the first 35-miler.” Being associated with both the organising club and the main sponsor, Noel didn’t have much of a choice but to enter that first race. There was no turning back from there.

HUMBLE OCEANS BEGINNINGS
Noel remembers that first race in 1970 clearly and says there were 26 starters and 15 finishers, with only five clubs being represented. “My intention was to finish the race and simply use it as a training run for Comrades. I ran down to Fish Hoek when I was told that my brother Robin, the only up-country runner, was leading the race and was already on Chapman’s Peak. With only one seconding car between us, I had no alternative but to jump in, in order to help second Robin. There were no water tables, and seconds followed their runners in cars and on motorbikes. Those who did not organise seconding wore red ribbons to indicate they would welcome assistance during the race. We also didn’t have any commercial energy drinks and we used to mix glucose with flat coke or orange juice, giving them names such as ‘snake juice’ and ‘rocket fuel.’”

Robin eventually finished in fourth position in 4:11:10, with Stellenbosch student Dirkie Steyn running barefoot and winning in a time of 3:55:50. Unfortunately for Noel, who subsequently went on to complete every Two Oceans since, not finishing in 1970 means this is the only Two Oceans medal that does not feature in his collection, and he says he has been unsuccessful in his attempts to arrange being awarded half a medal for having got to Fish Hoek!

During one of these early runs Noel was going for silver but the distance between a “red ribbon” runner who was being assisted by his wife and sister-in-law and himself became too stretched and he had to run through a very dry patch until his seconds were able to get to him. Having lost the silver because of this there was considerable consternation in the camp but he says this resulted in one of the family’s best decisions. “Come what may we would have fun. And so in every run we apply this motto and always have ‘fun on the run’!”

The next year saw 41 runners line up for the start of the race, with 31 finishing within the six-hour cut-off. Noel says it was a lonely affair out on the road as the runners were spread out more than two hours apart on the 56km course. In 1972 the Cape Argus became the new sponsor of the race and accepted Noel’s proposal to name it the Two Oceans Marathon. The rest, as they say, is history.

A SPECIAL RACE
Being known as the most beautiful marathon in the world, Noel says the views along the Two Oceans route has a considerable impact on runners’ energy levels. “The view from the top of Chappies over Hout Bay is breathtaking and it is always a relief to have got there. Cresting the top of Constantia Nek will, for me, always be a highlight of the voyage. The crowd support up there is tremendous and it helps you to change up a gear when you realise you’ll be running down to the finish in the shade of those lovely tree-lined avenues.” But he says one of the highlights of the voyage will always be running onto the field and the reality of the achievement hits home as announcer Harold Berman encourages you over the final 200 metres.

It’s not all easy-going, though, and Noel says one section that has always gotten to him is coming up from Hout Bay to the marathon mark. “I call it the graveyard patch, because it’s always hot, humid, cambered and slightly uphill – and it does pass the Hout Bay cemetery!”

Since the addition of the half marathon in 1998, the Two Oceans has grown rapidly and this year sees the biggest field yet line up in the ultra and half marathons combined. According to Noel, this growth will continue in the foreseeable future. “The race will continue to grow in stature as an ultra-marathon because it is seen by many as very achievable. Of course, being the most beautiful marathon route in the world also helps to lure runners! The half marathon is also regarded as an attainable stepping stone to the ultra, giving other members of the family a medium-term goal and the chance to be involved. For the same reason, the 56-metre Nappy Dash, Fun Runs and Trail Runs also attract enthusiastic new faces and families to the Cape over Easter.”

In addition to his 40 Two Oceans medals, Noel also has 20 Comrades Marathons under his belt and was the first person ever to be awarded permanent numbers in both events. With the vast experience he has in these races, he is hesitant to compare them to each other and says each one is its own race, with harder and easier sections. He says that what really makes a difference is the amount of preparation you put in for either one, while the same degree of fitness in a given year doesn’t mean you’ll perform equally in both races. “The race remains the boss!”

FORTY NOT OUT
After 40 years, no-one knows the Two Oceans route better than Noel, but even though he has run it so many times, he says he still gets nervous before the start of the race and gets both butterflies in his tummy and a lump in his throat when the fish-horn sounds at the pre-dawn start. “It never gets boring! Every year is its own race and the questions keep playing through your mind when you start: Have I trained enough? What pace should I run? Can I do a sub-3:00 marathon and try to pick up a silver? How will I handle Chappies and The Nek? And then the thrill of approaching the field and the finish line is still huge. It is such a wonderful feeling of achievement, all your aches and pains just disappear!”

Of course, over the years Noel has collected quite a few special moments along the route, but the runs that really stand out are those that he completed with a family member. He has done 15 with his brother Robin and 16 with his nephew John Dawes, while other family members who have joined him on the journey include his daughters Renee, Debbie and Caron, son-in-laws Richard and Alick, and nieces and nephews Mike Church, Andrew Stamper, Shanni Thomas and Vicky and Sean Lavery.

A few firm Two Oceans traditions include meeting the family at the junction of Southern Cross Drive for an egg and bacon roll with some orange juice and champagne, the swim on the beach at Hout Bay, and taking a slug or two of the Villagers Football guys’ beer where they’re picnicking on the way down Chappies. Add to that all the faces of old friends along the route and Noel says the decision to keep coming back each year is never a hard one. “What a lovely way to spend Easter, and what an incentive to keep training!”

The question has to arise as to how Noel achieves such incredible longevity in his running career, because not many people can run 56km races for 40 years running! His approach is pretty simple, though. “I have never adopted a prescribed training schedule, but have done what I felt best for my own circumstances at a given time. I’ve always stuck to a slow build-up on distance and tried not to do too much, too soon. I’ve listened to my body when it comes to selecting long training runs, setting my own pace and not letting myself be dictated to by the clock.”

“In the 70’s and 80’s my annual must-runs included the Comrades Marathon, two 100-Milers, three Ironman competitions and the Two Oceans. I have stopped all the other ‘biggies,’ but keep the Two Oceans for special reasons, and God-willing I will be able to enjoy many more 56km voyages. I am very fortunate to have been blessed with good health, which has enabled me to start and finish 40 consecutive runs. If all goes well I’ll be lining up again on 23 April this year and renewing acquaintances with so many wonderful people.”