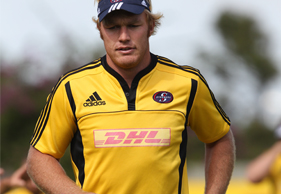 Playing open-side flanker for the Springboks, Stormers and Western Province, one of Schalk Burger’s main jobs on the field is as a ‘fetcher’ – he has to get to the breakdown point first and try to secure the ball for his team. It’s a tough job that requires not just skill and bravery, but a great deal of speed and fitness. In other words, Scalla has to do a lot of running!

“A loosie does between seven and eight kilometres of running in a game. A fullback will cover much more ground, but the big difference comes in impact, because loosies take or make far more tackles, ball-carries and clean-outs,” says Schalk. “Our tackle count is usually about 10 to 15 per player across the three loosies here at the Stormers, and we tend to spread the load evenly, so playing open-side doesn’t mean I do more than the others. Of course, it also depends on your opposition and how the game goes – if your team is playing better, you will have less tackles to make, but potentially have more ball-carries and do more open-play running.”

FITNESS BASE
As a top-level rugby player at international, Super 15 and provincial level, Schalk has to be super fit to get through an eleven-month season, and it all starts with keeping things ticking over in the off-season. “We only get a short break in December, but I do a bit of road running to keep myself in shape. If you live in Newlands you’ll see me jogging with my fianc?, or spot me taking a jog in Yzerfontein. I would never just stop running, but I also won’t see the inside of a gym in that month. I’ve really never caught on to whole gym thing. Don’t get me wrong, I do my part in the gym to keep my strength up and try to ensure I don’t get injured, but I’m probably the worst ‘gym guy’ in the Stormers squad.”

“When we get back for pre-season in January, we all have to do a fitness test. If we’re deemed fit enough, we stick to normal team training, but every year there is a ‘Fat Squad’ who have to come in at seven in the morning each day until they are fit enough. Lucky for me I’ve never been part of that squad! Then during the season we obviously do a lot of running on the field in training, but as the season goes on, the running gets less, because it takes longer to recover from games.”

NATURAL SPORTSMAN
Schalk was born in 1983, the son of former Springbok lock Schalk Burger Senior, and was a gifted schoolboy sportsman, playing rugby, cricket, golf and tennis, and also mountain biking, but he says he was pretty average in athletics. “I did run the 3000m, but only at selected events. I also did the 5km fun run at the Safari Half Marathon in Wellington a few times. I do enjoy running, but more so when I’m chasing something!”

After school he enrolled at the University of Stellenbosch to study BA Law, but soon dropped out when his rugby career took off. After playing for the Under-21 Springbok side that won the U21 Rugby World Cup in 2002, he was selected for the senior Springbok squad and made his debut against Georgia at the 2003 World Cup. In 2004 he helped the Boks win the Tri-Nations and was adjudged the IRB International Player of the Year as well as the ABSA SA Rugby Player of the Year. He then played an integral role in the Springboks winning the 2007 Tri-Nations and World Cup trophies, and is today one of the first names on the team sheet for country and province, where he captains the Stormers and Western Province teams.

“The Highlight of my career so far is obviously the World Cup win in 2007, followed by the two Tri-Nations wins. Now we’ve got another World Cup coming up, and everybody will want to be in the Springbok picture, but for now I’m totally focussed on the Stormers and Province. I’ve been here a long time and we’ve won no silverware in that time, despite reaching two finals last year. It was our best year as a franchise, but ended very disappointingly. That’s what we are working to fix this year.”