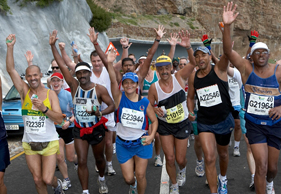 The problem with ultra-marathons and long training runs is that we sometimes find ourselves tired and craving the end of the run, even when we are running in the company of friends. Typically, an hour or so into the long run, the light-hearted banter fades and the jokes have all been told. At this point, we run out of conversation and it becomes a proverbial mind game – and we haven’t even reached halfway yet! The solution to help us keep going? Gobble up the Ks by playing the alphabet game.

The rules are simple. You can play by yourself, but it’s more fun in a group. Agree on a topic and then take it in turns working through the alphabet, with each person coming up with the name of something in that category. Try girls’ names as an easy intro. You can kick off with A for Angela, the second person can chip in with Belinda, then number three offers Carol, and so on. You continue until you get to Zelda or Zara, and realise you have just burned up 2km without feeling it. Next try boys’ names (Adam to Zane, for instance). Capital cities are a test of high school geography and general knowledge, but after a few stutters you should be able to get from Athens to Zagreb in about 2-3km.

Animals go in a flash from Aardvark to Zebra, and we managed to demolish the Ou Kaapseweg climb one year with rock groups and musicians from Abba to Zee Zee Top, including some 1990s grunge bands no-one had ever heard of, but had to accept. The atomic scale of elements is interesting, if only because whoever gets W will throw in “water” hoping to get away with it, despite knowing it’s a compound of hydrogen and oxygen. Otherwise, argon to zinc is a reasonable 3km distance gobbler.

The dreaded X…
Hint: Try not to be in sequence for the tricky letter X – you can “pass,” but it’s an admission of defeat, which we runners hate. But if you do cars (Alpha Romeo to Zephyr), keep X-Trail up your sleeve, and for places in South Africa (Albertinia to Zeerust), you’ll probably get away with Crossroads if you draw the X.

One day we hit the Redhill climb when the novel suggestion of plants was put forward, but with a tongue-in-cheek bombshell: “Latin names only.” After the groans and death threats subsided, there was an eerie silence, until someone quipped “asparagus.” Laughter and insults followed. Then someone came up with “begonia.” We stuttered through the alphabet with some long pensive pauses, side arguments and challenges on some suspicious, invented Latin names, but after we finally worked through to Zucchini, we had passed over the top of the hill.

Whatever topic you agree on, it will divert your attention from the distance and bring the finish line closer. And you’ll be amazed how short the hills in Two Oceans or Comrades feel once you take your mind off them!

About the Author: Chris is a member of Atlantic Athletic Club in Cape Town and has run many ultra-marathons, including 22 Two Oceans Marathons, with a best time of 4:06:00.

Besides trying to have some fun on the run to take your mind off the distance, here are a few more great tried and trusted tips to get through an ultra-marathon in one piece. – BY SEAN FALCONER

1. Watch Your Step
Watch out for debris in the road at the start (black bags, water bottles, clothing, etc.). You don’t want to take a fall and end your race, or get trampled in the dark. Also watch out for cat-eyes and traffic cones, and discarded water sachets or banana peels along the route.

2. Run Your Own Race
Do not try to run the same pace as another runner for very long, unless it is someone employing the same race strategy as you. He or she may plan to push harder on uphill sections and go slower on the downhills, or even to walk all the uphills, whereas you don’t, and this will throw you off your own race strategy.

3. Don’t be Afraid to Walk
For most runners, the best way to get through an ultra-marathon is by taking regular walking breaks. They allow the muscles to recover and the heart rate to lower, while you can eat some much-needed refuelling food. Some runners aim for a set ratio of minutes running to minutes walking, e.g. 20:5 or 30:5, but you can do whatever suits you best. Just don’t wait too long for your first walk break – then it won’t be walking by choice, it will be walking because you simply can’t run any more.

4. Break it Up
You can make the distance feel less daunting by splitting the race into manageable portions of five or 10 kilometres. Reaching mini-milestones will make you feel like you’re making progress, and taking on the next 10km is so much better than the next 50!

5. Ask the Experts
Once into the race and settled into your comfortable race pace, try to stay with runners that have completed the race several times before – look for the permanent blue (Two Oceans) or green (Comrades) numbers. These runners will know the route, and know not to go too fast too soon. Learn from them, and even ask questions if you want.