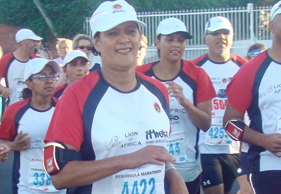 It all started in January 2008 when Farouk Meyer, a well known Cape runner and event organiser attended a braai. As a health-conscious person who also serves as chairperson of the Heart Foundation of South Africa, he didn’t like what he saw, because there was just so much food laid out. He said to one his non-running friends, Waleed Isaacs, that he was worried that people in their community were eating themselves to death, but that he could do something about it.

“I told Waleed I could teach him to run, get fit and lose weight, so the following week he joined me at the Rondebosch Common for a 1km walk-run-walk. Another friend, Ebrahim Mohedeen, actually drove past to see if Waleed was going through with it, and that Thursday he also joined us. Then early in February, the three of us ran a 10km race together and they both finished within the cut-off, with their families watching. The following week all those family members – more than 50 of them – also pitched up at the Common to start training!”

CLUBBING TOGETHER
Nine months down the line the regular training sessions at the Common had grown to more than 100 people, and some of the original beginners were now leading training groups themselves. With many ‘members’ now participating regularly in road runs and walks, they decided it was time to form a running club, so they applied to Western Province Athletics and in March 2009 were formally accepted as the Itheko Sport Athletic Club. (Itheko means ‘the big occasion’ in Xhosa.) Shortly after that, Lion of Africa Insurance came on board as the club sponsor.

Hardworking club secretary Shiehaam Darries, who was one of the earliest members, says, “I remember that we had 80 registered runners and walkers by the end of 2009. By the end of 2010 we were 280 registered athletes, and currently we’re at 350, with another 200 beginners training with us who will probably do their first 10km soon. Most will register with the province then, which will make us probably the biggest club in the province.”

YOU TOO CAN DO IT
Shiehaam believes that it is the way the club caters for people that were never active and never dreamed of running that sets Itheko apart from other clubs. “We simply tell them that they can do it, despite the typical response being ‘Who, me? Run? You must be crazy!’ Give them a week or two and they’re usually hooked.” Like Aunty Miedie, who says she started showing up at the Common to see what the fuss was all about after continually hearing about running training and ‘Coach’ Farouk at various family gatherings.

“It didn’t feel good that something was abuzz, which sounded like a lot of fun, but I was missing out. So there I stood watching these ‘runners’ going round the Common, still not feeling that I could do it, but the friendliness of the group and the chit-chats before training kept me coming back, and finally I gave it a go. I was all for walking, but then Coach said, ‘Now from the corner we gonna start a slow run.’ I turned around to see who he was talking to, as I was sure he didn’t say that to me. I was so wrong! I am now a registered athlete and so proud of being a member of a club which has so many friendly and wonderful people.”

TRAINING TIME
The Itheko training sessions take place on week nights between 6pm and 8pm, and on Sunday mornings they meet for a long slow run. On Tuesdays and Thursday the members meet at the Common, where they split into their various groups, each led by a group leader, who is assisted by group assistants to keep the large groups together and make sure everybody is okay. There are six groups, ranging from beginners under four weeks and beginners over four weeks, to advanced beginners, intermediate, fast and elite groups. The top four groups meet for the LSD runs on Sundays, and on Wednesday nights the top three also meet at Vygieskraal Stadium to do speedwork on the track.

Besides getting so many people running, another success story at Itheko is the group leaders, nearly all of whom were beginners themselves not too long ago, and most of whom now serve on the club committee with Farouk, like acting chairman Fuad Adams, club secretary Shiehaam and club captain Ebrahim. It is their commitment and ability to inspire that keeps the Itheko members coming back, according to club member Faldie Ryklief. “These key role players have an unselfish attitude towards helping their communities begin a new, healthy, uplifting and happier life. They have the amazing ability to motivate people, young or old, and manage any lack of confidence or worries about ability that newcomers often have. The sacrifice made by all the exec members and group leaders, the time and effort they put in, and the interest they show in our members, is unprecedented. That is why we come back, and why we love this club so much.”

WORD OF MOUTH
The club’s terrific growth in numbers is largely due to word of mouth, and through being visible. Farouk loves telling the story how Tevin Reddy ‘found’ the club. “Tevin wanted to get fit and healthy, so he looked online for a running club in his area. He went to join one club’s weekly run, but within 500 metres he had been totally left behind, so he turned around and jogged back to his car. Then while driving home, he saw our massive beginner group stopped for a water break at an Engen garage, so he stopped to ask who they were. The next week he joined our training group and is still with the club.”

Shiehaam says they now regularly have over 400 people at their training sessions. “The other night there were 138 people in the beginners under four weeks group, including 30 newcomers who had joined that week alone. And that was after we’d split the group and sent another 60 off with another group leader! As a result the club exec met recently to discuss bringing in more group assistants, and we’re very proud that the men are now being joined by more women in this role, with Fatiema van de Rheede and Faadiela Jardine joining Nazlie Mohedeen as assistants. They were all beginners not so long ago.”

Farouk is naturally proud of what the club has achieved thus far. “I think we’ve done more than any other club in the province to bring new people to running. Almost every one of our members had never done any sport before, let alone distance running, and if every other club did even 10% of what we’ve achieved with beginners, then Western Province would be the biggest running province in South Africa.”

NEW DEVELOPMENTS
The club is currently setting up a new 2.5km time trial course, and busy with final planning for the inaugural running of its Slave Route Challenge Half Marathon, 10km & 5km in June, which will also feature a separate 10km walk event. Meanwhile, the club is sponsoring 10 road athletes and 10 track athletes in its elite development squad, including newly crowned Western Province Half Marathon champion Ellroy Gallant, who recently moved to Cape Town from George. He was closely followed by several clubmates in the provincial champs race, helping Itheko to also claim the team prize.

“Ellroy is our only so-called ‘pro’, with our other top runners all young development athletes we’ve brought through, so we were incredibly proud to see them do so well,” says Farouk. “They’re given free membership and club kit, including running shoes, plus we have linked up with the University of Stellenbosch Body in Motion programme, where our top runners get free physio and body analysis when they need it. We’re also seeing success on the track, with two of our juniors recently selected for the Western Province team for the SA Junior Champs.”

However, Farouk is quick to point out that the focus remains on the beginners in the club. “We try to make everybody feel welcome, and always make a fuss over people running their first 10km race, or taking time off their personal best.” Shiehaam adds that “Many runners finish a race and immediately hop in their cars and go home, but we all stay until the last Itheko member has finished, so that everybody gets support. We also make sure that nobody doing their first 10, 15 or 21 runs alone.”

EATING OUT, ITHEKO STYLE
Another reason the Itheko members stay so long after finishing races is for the club’s legendary post-race spreads, hence their ‘in-club’ joke about being an ‘eating club with a running problem.’ Ebrahim even stood up at the club’s recent awards evening in February and joked that “Itheko is the club for fat people who like to eat!” However, that was said with his tongue firmly in his cheek, as evidenced by the massive pile of certificates handed out to members that same evening for their first 10km, 15km or half marathon. That is what makes Itheko one of the most inspirational clubs in South Africa today.