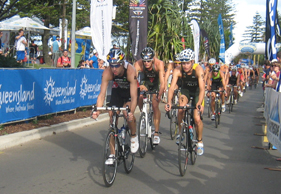 The Mooloolaba Triathlon has grown into one of the largest Olympic distance triathlon events in Australia and is the centrepiece of a three-day multi-sport festival, held from 25-27 March this year. The Festival also includes the Asics 5km Twilight Run, Seven Mooloolaba Sport and Lifestyle Expo, Mooloolaba Ocean Swim and The Courier-Mail Superkidz Triathlon.

AUSTRALIAN VICTORY
In the elite men’s race, it was a solid start to the season for Australia’s Brad Kahlefeldt as he won his third Mooloolaba and seventh World Cup title of his career. He also led Australia to a gold-silver finish as team mate Brendan Sexton overcame a 15-second penalty to out-sprint France’s David Hauss for second place, as both men made the World Cup podium for the first time in their careers.

A full field of 75 elite men sprinted into the choppy water of the Pacific Ocean for a one-lap 1.5km swim. Denmark’s Jens Toft led the field out of the water, followed closely by the major players. Once onto the tough 40km bike course, most of the field came together. With two laps to go, Toft, Stuart Hayes and Attila Fecskovics made a strong push and were the first to hit the 10km run course. But at the bell lap, Kahlefeldt and Hauss were leading by about seven seconds. Down the final finish chute, Kahlefeldt kicked into another gear and powered to the line in 1:51:53, leaving Sexton and Hauss to battle for second. Gomez came across in fifth place, while South Africa’s Claude Eksteen finished 43rd in 1:54:29 and Hendrik De Villiers 46th in 1:54:34.

GIRL POWER
As hard as she tried, two-time World champion Emma Moffatt could not bridge the gap on courageous New Zealander Nicky Samuels, who broke through for her first ITU World Cup Triathlon win on a rain-swept course in Mooloolaba today.

The inclement weather certainly didn’t dampen the enthusiasm of the athletes or the vocal Sunshine Coast crowd, who spurred Moffatt on after she gave Samuels a two-minute head start at the end of the 40km bike leg. Moffatt finished a gallant second, beaten by 20 seconds, with Canberra-based Chilean Barbara Riveros Diaz third, despite serving penalty time for a transition infringement. Canada’s Paula Findlay put together a strong, consistent race for fourth, with Czech Vendula Frintova producing the “run of the day” to storm home in fifth, after coming out of the water in 28th position.

“This is my first win at this level. I was third in a World Cup a couple of years ago and haven’t done so well since then, so this is my first World Cup win,” Samuels said. It’s the second time Moffatt has been second at Mooloolaba and she admitted she was happy with her first Olympic distance race of the year. She was then reminded that the race also saw her crowned the Australian Champion. Moffatt replied with: “I’m good at winning things without actually winning,” referring to the fact that she won the World Championship last year although she never actually won a round.