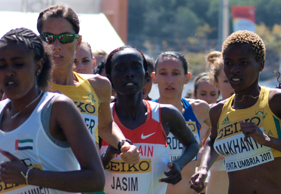 The team’s journey started with the selection process at the ASA South African cross-country trials that took place in Potchefstroom on 22 January. This year’s trials assembled our country’s best athletes and with the selection criteria well known (first six in each category), hard-fought races where run.

The junior men’s race was an ‘all new kids on the block’ affair when William Kaptein won, followed by Merline Klaatse and Jeromy Andreas, all from the coastal provinces. The junior women’s race was easily won by last year’s winner and current South African 5000m champion, Letitia Saayman, followed by Caroline Marandela and Thato Makhafola.

AFRICAN CHAMPS
The African Cross-Country Championships took place on 6 March at Keurbooms Park in Cape Town, with most of the strong African cross-country nations in attendance – only the Ethiopians didn’t make it to South Africa. ASA, under the leadership of James Evans, put on a great show as hosts, and South Africa produced good results with team bronze medals in the junior men and women’s categories as well as the senior women’s team competitions behind Kenya and Morocco.

Our senior men produced an excellent result, finishing second behind Kenya for the team silver medal. Individually our best performances came from Kgosi Tsosani (5th senior man), Annerien van Schalwyk (11th senior woman), Luyanda Qolo(14th junior man) and Sylvia Tshetlanyane( 12th junior woman). Hard lessons were learned, though, and the South African team members realised that they have to run as a team, stick together and go out harder with the leaders, within each runner’s own abilities.

Our team arrived in Punta Umbria on 18 March and the entire team as well as management went for a training session on the official training course. The same was done on Saturday morning. The team and management also went for a course inspection where athletes familiarised themselves with the course under the guidance of team captains Stephen Mokoka and Ren? Kalmer.

Team tactics were discussed by the coach and Jean Verster (Team manager) who’s hands-on experience of these championships was of great value. Our athletes agreed that the course was very fast and that they would all have to go out faster and stick with the leaders for as long as possible. This eventually proved to be a great success, as proven by our team’s results.

RACE DAY
The day started out with our junior women achieving an overall 10th position in the team competition, with Khonzeni Gwegwa placing 44th individually. Our junior men produced one of their best results ever with a 6th place overall and a 26th individual position from William Kaptein. Our senior women finished 9th overall, their best position in the last three years! Ren? Kalmer had a gutsy run, finishing 31st and proving that her hard training for her upcoming international marathon debut is paying off.

The senior men kept the best for last and finished 5th overall – South Africa’s best team result ever in the senior men’s competition. Stephen Mokoka ran a well-judged race to finish in a brilliant 15th place, proving that he is the most versatile middle distance runner currently in South Africa. Putting all the team results together, our athletes did us proud with an overall 6th position in the world.

The success of the team was mainly due to the fact that they were disciplined and ran together as a team, although still within their own individual fitness abilities. It is essential for us to build on this success for the future.

As the next World Cross-Country Championships will take in Poland in 2013, it has been suggested that the squad run two IAAF cross-country permit meetings in Europe towards the end of November and beginning of December 2012, as conditions in Poland are expected to be muddy and rainy.

I believe that the South African Cross Country team has the ability to move into the top team medal positions in the world. We have a squad that is of world class!

Ren?’s Experience:
“For the past five years cross-country has not been my main focus as I was concentrating on track. I must confess the main reason I decided to return to cross-country was because the World Championships was held in Spain and this is my favourite overseas country to compete in. When I finished in a very disappointing 22nd place at the African Cross-Country Championships I seriously considered withdrawing from the team. Luckily I kept the best for last! At the World Champs I was the first South African female home after finishing 31st overall in the 8km race in a time of 27:02. The challenge in cross-country is both mental and physical and at the World Champs my track speed initially worked against me; I started way too fast and stuck with the leaders on the first lap. But at such a big event you have to take the risk and it eventually paid off. Running well at the World Champs really boosted my confidence for future local and international events. I am excited about my preparation for my international marathon debut which will be in Prague in the Czech Republic on 8 May.”