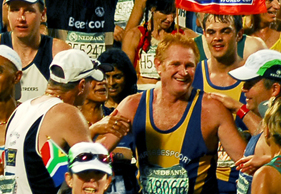 You’ve trained for months, dreamt about crossing the line in a certain time and naturally feel a bit nervous lining up at the start, so you decide to put your faith in the hands of a ‘bus driver’ or pacesetter with a little flag proclaiming he will help you reach your goal time. More often than not, experienced pacesetters will get you across the line in that promised time, but sadly and unavoidably, it has also happened that the ‘bus driver’ blows, or just paces the race wrongly, resulting in you either missing the finish time all together or having to run so fast in the last kilometres that you simply can’t keep up.

This happened a couple of years ago at Comrades when a sub-9-hour bus crossed the line with only seconds to go before the cut-off for a Bill Rowan medal. Many made it, but there were just as many who in the final kilometres were too exhausted and just not able to keep up with the drastic increased pace at that stage of the race. Similarly, it has happened that two pacing buses aiming for the same finishing time are quite far apart out on the route, leaving some runners unsure which bus to join. Getting in the wrong bus could mean the end of a dream for many…

IT’S ALL ABOUT TIME MANAGEMENT
The most important thing is to choose an experienced pacesetter with a good idea of time management. Here the name Vlam Pieterse from Hartbeespoort immediately springs to mind. Vlam is one of the best known and experienced sub-12-hour pacesetters at Comrades, as well as other races, including the Two Oceans. Last year he was even awarded a Gold Fields Spirit of Comrades award for all his years of pacing.

Vlam has exemplary pacing ability and has helped many runners fulfil their dreams. This is evident in what many athletes have to say about him on Facebook:
• “I ran Comrades and I have a medal to show for it. I will never in my life forget that moment, and I have you (Vlam) to thank for it, you and your fabulous bus. – Linda Van Den Heever
• I was a novice and had no idea what to do. I can’t believe how you got us through, we trusted you the whole way and you did it! – Janine Schmidt
• You recently got me down my first Field’s Hill, to get me to my first Comrades medal. Awesome stuff! – Cathie Van Rooyen

Vlam himself is humble when asked about his pacing ability. In the last 15 years he has ensured that the last runner in the sub-12-hour bus at Comrades finishes within four minutes of the cut-off time. “The most important thing about a pacesetter is that he takes the profile of the race into consideration, that he runs consistently, and that he definitely does not start too quickly!” says Vlam. “I often say: ‘The more you sweat during the first half the more you’re going to bleed during the second half. Pace yourself.’”

Vlam says although anyone can become a pacesetter – you don’t need special permission from race organisers – there are a few important things to keep in mind when considering becoming a pacesetter. “A pacesetter needs to have a big mouth and he needs to be able to motivate and talk to people. On a long race it is normal for runners to just get fed up of running; sometimes your mind just tells to you give in. But if you have a pacesetter that motivates you, it becomes a bit easier. In the last few kilometres of a race, I often tell the runners in my bus to endure a little pain now, because a lot of glory awaits them. But if they give up they have to live with a year of disappointment.”

Another important consideration when becoming a pacesetter is to know your own abilities, warns Vlam. “If you see you are not going to make it for some reason or another, you have to be big enough to tell the runners in your bus or hand over your flag to someone else,” he says.

IN OR OUT
So who should get in – or out – a running bus? Novices benefit most from hooking up with a running bus, and of course, runners who just manage to finish a run within a cut-off time; those running on the edge, says Vlam. He admits that there are a lot of people that just don’t like running in buses. “Some people feel claustrophobic in a running bus… and of course, the sweat and smell is off-putting to many.”

So when considering hooking up with a bus, remember the following:
• If you are a novice and you want to finish your first big race such as Two Oceans or Comrades, chances are you will if you join a bus with an experienced pacesetter.
• You will meet amazing people and form lasting bonds after spending hours on the road with fellow runners. Those are the people that will carry you through the last few dark kilometres.
• When surrounded by fellow runners all pushing their boundaries, you are less likely to give up and start walking.
• If you don’t like crammed, sweaty and often smelly spots, get out!
• If you get irritated quickly and are too strong-willed, don’t get in a bus!

Lastly, when setting out in a bus you have to realise there is always a chance of the pacesetter not making it or things going wrong. For that reason, always have a back-up plan, and beready to go it alone.

Vlam will be in pacesetting action at the Old Mutual Two Oceans Ultra, driving the sub-7-hour bus once again, and then will lead his sub-12 bus at Comrades. You’ll find him near the back of the pack.