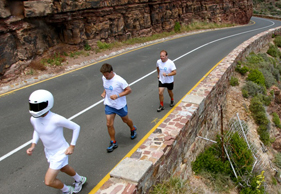 If you are a middle to back of the pack runner at the Old Mutual Two Oceans Marathon this year, chances are good you will see a skinny, helmet-clad guy in white running next to a muscle-bound former rugby player. That will be Bob Skinstad and his running buddy, The STIK. Together they are tackling Two Oceans 2011 in aid of a good cause: With each step they will be making sure that shoes get onto the feet of thousands of South Africa’s neediest learners as part of the shoe drive by the Bobs for Good Foundation.

The Two Oceans organisers have appointed the Bobs for Good Foundation as the event’s official charity for the next three years. Founded by Bob and his lifelong friend Ron Rutland, the foundation is a local non-profit organisation, established out of the need to restore dignity and pride to underprivileged learners by giving them a new pair of South African-made leather school shoes. According to the Department of Education, over 7 million children in South Africa do not have school shoes, which is more than half the school student population!

In addition, through an innovative partnership, Bobs for Good has developed a school shoe using reflective strips similar to those found in running shoes, which is aimed at reducing the number of children killed walking to and from school in low visibility conditions.

“It is such a simple thing but it makes such a huge difference in the children’s lives. By combining our various strengths, we hope to make a difference and play a positive role in the future of the country and Africa as a whole,” says Bob. “We are thrilled to be collaborating with such an iconic South African event, and can’t wait to begin working with the team from the Old Mutual Two Oceans Marathon on the exciting plans we have, and ensuring that we contribute wherever possible to the success of the event in 2011 and beyond.”

FROM RUGBY PLAYER TO RUNNER
Bob made his first ‘appearance’ as charity runner at the Wildcoast Wildrun in September last year. The Wildrun is a multi-day wilderness trail running event which takes you along the most beautiful and unspoilt coastline: the Transkei Wild Coast. Runners run solo for 112km over three days. Last year, Bob decided his foundation should get involved with the Wildrun, where hundreds of shoes were dropped off at needy schools in Transkei. What Bob did not bargain on was that he was actually going to join in and run the full 112km! “I did the Wildrun at the insistence of Ron and I loved every minute of it!”

Though a few niggling injuries hassled him during the three days of running, Bob stuck it out and crossed the finish line triumphantly on the third day. He then led a group of Wildrun runners on the shoe drop-off at local schools, but that’s not where The Bobs for Good Foundation’s involvement with the Wildrun Series ended. At the recent Lesotho Wildrun, a group of representatives from the Foundation once again joined in and did another shoe drop-off at needy schools in Lesotho. “We will definitely be supporting all the Wildrun events in future,” says Bob.

His decision to tackle the Two Oceans 56km came when the Foundation got involved with Two Oceans through Old Mutual, the main race sponsor. Sticking to a proper training programme has been difficult, as he travels extensively, says Bob. “I have squeezed in a lot of 5km runs at hotel gyms! I must admit, I am badly unprepared! If I have to describe my training schedule I will have to say: ‘too little, too late.’” And yes, he has to admit that running is much harder than rugby!

THE STIK
So who is The STIK that will be joining Bob on the run? And what will he be up to at Two Oceans? Apart from the fact that Bobs for Good has enlisted the help of the STIK, an enigmatic and anonymous runner, not much is known about him! Some say The STIK was born without sweat glands and has the ability to photosynthesise…

Whatever the case, the STIK and Bob will be leading a special bus in the ultra-marathon. “I don’t think I can beat him and I am surely not going to try,” says Bob, who is encouraging entrants to run alongside him in the STIK’s bus.

And if the thought of 56km seems too daunting, Bobs for Good also has a bus in the 21km run. In fact, all employees at Bobs for Good will be running either the 56km or Half Marathon. Ron Rutland, co-founder and managing director of Bobs for Good, has been taking his training very seriously. “I’ve run to work a few times, and I’ve been cross-training, as I’m also taking part in a cycle tour soon. I try to keep my training consistent, especially as I know I’ll be running alongside The STIK, who’s going to set quite a pace!”

Claire Alexander, beneficiaries manager has also been running to and from work, but her incentives aren’t strictly marathon-related. “In the marathon, you are most likely to see me chatting up the STIK. I can’t wait to run with him. I bet he’s just too handsome to actually walk around normally, that’s why he has his helmet glued to his head,” chuckles Claire.

“The support up to now has been magnificent,” says Bob. Runners have already raised a whopping R175 000, which means 1 750 children can get a brand new pair of South African-made leather school shoes. Last year alone, Bobs for Good delivered 17 000 shoes to the neediest learners in South Africa, and their goal for this year is significantly higher.

At Bobs for Good, they want to encourage participation. “We are very proud to be associated with the Old Mutual Two Oceans Marathon, and we hope that each footfall in the marathon will help South Africa’s children take their first steps towards a brighter future. Show the rest of the race that you care; wear your blue socks and run alongside us this year. They’ll guarantee that you make it over the finish line smiling, and you’ll make a difference with every step you take. If you’re wearing socks, they’re wearing shoes. It’s that simple.”

The Bobs for Good Foundation is doing some amazing work. Check out their website at www.bobsforgoodfoundation.com