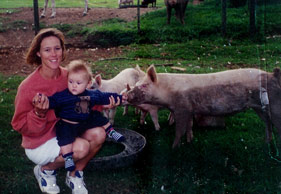 It all began in December 2009. I met Roy Heine online and we began chatting. He told me he belonged to Charlo Athletic Club in Port Elizabeth and had run 76 marathons in total. He started nine Comrades, finished three, and had also run 12 Two Oceans Marathons.

In 2005 Roy had a heart attack; he was never going to go back to run Comrades, but then we met each other. I told Roy that one of the very few regrets I have in my life is that I never got to run Comrades, something I had never doubted I would do, until I broke my neck…

THE END OF LIFE AS I KNEW IT
I can already hear you ask: What happened to you? So let’s first take a step back. On 13 April 1998, on Easter Monday, I was in a car accident when we were driving home from a family holiday in the Eastern Cape. Just a couple of days before I remember feeling blissfully happy as I lay on the beach watching my son, Chad, play in the sea-sand and water for the first time in his life. I was content, believing foolishly that I was in control. Just days later our seemingly perfect lives were shattered.

It was a long drive and we purposefully stuck to the ‘back routes’, as the Easter weekend is notorious for a high incidence of car accidents. With a 10-month-old baby and our dog in the car, we wanted the trip to go as quickly and smoothly as possible. With just over two hours to go, we were approaching Standerton. Chad became distressed – he had a dirty nappy and wanted to be free of his baby-safe car chair. We decided to push through to Standerton, where Chad and Rocky (the dog) could both receive the attention they needed.

After a while I could no longer take Chad’s heart-wrenching sobs, so I climbed into the back, picked him up and he instantly stopped crying. I lay him down gently on the seat right next to Rocky to change his nappy. Seconds later, my husband yelled at me to grab hold of Chad. The car in front of us slammed on brakes and came to a sudden halt. I remember seeing a blue car in front of us with a cloud of dust or smoke surrounding it. Instinctively I turned back to grab hold of Chad. He had flipped over on his tummy and was crawling away. I made a desperate attempt to grab hold of his foot, but he was too fast. I lost my balance as my husband lost control of the car. Our Land Rover overturned and landed on its roof, and in the process I hit my head.

I never lost consciousness. I was aware of everything going on around me. I don’t remember feeling any pain, but I could not move. I watched as my arm fell limply from above my head into my lap. I realised immediately that I had broken my neck. I just knew. I heard Chad crying. I couldn’t turn my head to find him. Shouting, my husband asked if I was alright. I told him that I had broken my neck. Miraculously, nobody else was hurt. Even Rocky was still wagging his tail.

The doctor at the hospital tried to sound cheerful, but I could see the sadness in his eyes. Somehow I just knew that he too feared the worst. I was transferred to the Eugene Marais Hospital in Pretoria, where they did an emergency operation, fusing my fourth and fifth cervical vertebrae, using bone extracted from my hip. Shortly after, I looked up into the face of the man I loved – the father of my child – as he told me gently that I would always be paralysed. The tears rolled down both our cheeks. I lay there, unable to move, unable to speak and unable to breathe on my own. I had never felt so scared in all my life. That was the end of life as I knew it.

ADAPTING TO A NEW LIFE
I was always an active woman who loved sport and outdoor activities, and I was a proud member of the Nelspruit Marathon club. I absolutely loved running. I had run my last race when I was about five months pregnant with Chad. I had started running time trials again after he was born, and my goal was to run Comrades soon after that. But then tragedy struck.

After the accident my husband and I grew apart and sadly eventually got divorced. Over the years I have learned that you do not need to walk to be able to soar in life. I’m very proud that I live on my own in my own home. With the help, generosity and support of my family, friends and the Nelspruit community, I am privileged enough to employ care assistants to take care of all my physical needs. Although they are available 24/7, I remain firmly in control of my home and responsible for my own wellbeing.

THE START OF A LIFELONG BOND
OK, back to how I got to ‘run’ the Comrades Marathon. When I mentioned to my online friend Roy that I would have loved to run the Comrades, he immediately replied and said that he would run the next Comrades for me. I was deeply touched that a complete stranger would offer to do something like that for me. I was flattered, but also somewhat amused. I doubted his commitment and I was suspicious of his intentions.

Roy and I continued to e-mail one another and we spoke on the phone occasionally. It quickly became clear to me that he was a real gentleman with a heart of gold. I liked him, but I remained guarded. He indicated that he wanted to meet me in person. I was amazed, but put him off. I reasoned in my mind, what if he is some weirdo? What if I didn’t like him? What if I did like him? What is the point of meeting him? He lives in Port Elizabeth, I live in Nelspruit. Miles apart. What if…?

Our interactions continued, and we poured our hearts out to one another in long e-mails. We could relate to each other in many ways, as we have both had physical and emotional setbacks in our lives. He had had a heart attack and was recently divorced. He needed somebody to talk to and I was able to listen. Our friendship blossomed.

HIS TRAINING BECAME OUR TRAINING
He would give me almost daily reports on our training. It all seemed a bit surreal. A part of me really didn’t want to hear how well – or badly – his training was going. I was silently resentful. I would give anything to feel that ache in my limbs. But somehow, Roy already knew that. And that is exactly what kept him going.

I was angry. Did this man honestly think that it would make it easier for me to accept that I am paralysed from the neck down if he ran the Comrades Marathon for me? I should have been running my own bloody race! I was dubious. Who in their right bloody mind is going to run 90km for somebody else – a woman he had never even met face-to-face, and then simply hand over the medal? Another part of me was joyful and excited that I had the ability to inspire a man in his fifties to attempt the Comrades!

Somewhere along the line, Roy decided that he was going to do the Ironman as well. Typical, I thought! Now he’s on his own bloody mission. There is no way in hell he is going to do two such epic events, one after the other, unless he is a superhuman machine. So there goes my Comrades! I paid even less attention to his ramblings on about his running, cycling and swimming, but I never ever admitted this to Roy. I just encouraged him and kept my feelings to myself. He completed the Ironman. I was so very proud of him. But I remained fearful of disappointment.

OUR COMRADES
In the days leading up to Comrades 2010, I allowed myself to become excited for the first time. The night before the big day I had butterflies in my tummy. What if he did not make it? What if I had put too much pressure on him? What if he got injured? What if he had another heart attack? I realised then that I cared about this man. We had become close and special friends. No stupid bloody medal can ever replace that.

I was awake long before the race began – eyes, ears, heart, mind and spirit glued to the television set. The Chariots of Fire playing in the background and the sound of the cock crowing overwhelmed me with a flood of tears and a wave of intense but mixed emotions as thousands of runners set off. Oh God, why can’t I be there? Why can’t I run? Why…? I lay there sobbing for at least an hour. My ears were wet, my cheeks itchy and my pillow cold with tears.

I spent the day in my recliner in front of the TV with my laptop. Our race number was 32034. I was tracking our progress on the net. I had to stop myself from texting Roy too often. I didn’t want to distract him, but I wanted, desperately, to motivate him. I was sending out tweets on Twitter, enjoying the fun and interaction with my supporters. I watched as thousands of runners crossed my TV screen all day long – eagerly waiting to see Roy running for us.

As I watched some of the runners with their grimaces of physical pain and mental exhaustion and others with their tears of joy at their wonderful achievement, I was on my own rollercoaster of emotion. I marvelled at the optimism, courage, determination and ability of the human spirit to rise above physical and psychological challenges.

THE MARATHON OF LIFE
As the day progressed, and with each step the runners took, I became more introspective and realised that my life is a model of a marathon. A marathon requires all your mental and physical resources in order to complete. I’ve had to overcome several obstacles in my life and reach beyond my limits using a strong, positive mental attitude.

The Comrades Marathon is a compressed, intense and gruelling form of life you experience within the confines of 12 hours. But, these lessons can be carried through into your everyday life within the margins of (hopefully) 80 years, or more. Running – like life – gives you setbacks. It messes with you physically and psychologically – and then you go on.

WE DID IT!
The joy of seeing Roy running into the stadium with a huge poster of me saying, For My Friend… Tracy Todd will stay with me forever. I was so proud of him. I completed the Comrades through Roy and he became known as my ‘Comrades Legs.’ A month later Roy delivered my medal in person.

Roy Heine believed in himself, even though I didn’t. He taught me that the most powerful people in the world are the ones who believe in themselves. Roy’s dedication reminded me to continue believing in myself. I, too, can have the power to make a difference to this world.

Somehow, from somewhere, I have also managed to get the encouragement, motivation and inspiration to go on, which gives me the strength for the toughest marathon of all – the marathon of life. Thank you, Roy Heine, for being my friend. You are a great inspiration to me.