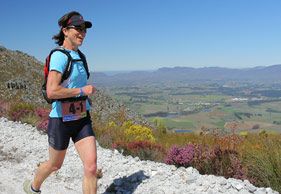 The Goretex Trans-Alpine Run is an eight-day stage race that covers 260km, starting in Germany, crossing through Austria and ending in Italy. It is considered one of the pinnacle events on the global mountain running calendar. Runners enter in pairs and must remain together throughout each stage, and the 2010 edition of the race featured a South African team for the first time. Ryan Sandes and Linda Doke did fantastically to claim third position in the mixed pairs category – although Linda reckons Ryan would have done better if she didn’t hold him back…

“We were well matched in terms of our hopes and goals for this race, and the same goes for temperament. But when it comes to running capability, no one matches Ryan. However, it was his patience, his tolerance and his constant unselfish approach to us as a team that impressed me most,” says Linda. “Never once in the eight days did Ryan show any sign of frustration when I wasn’t able to maintain his pace or push harder. Instead, he gave me constant encouragement to keep me going – and threw me the tow-rope when I really needed a bit of help. It was a privilege to run with him.”

HITTING THE ROAD
Linda is 41 and lives in Hout Bay, Cape Town, with her husband and fellow runner Craig Rowlands. She grew up in Zimbabwe, then came to South Africa for schooling and went on to complete a degree in journalism from Rhodes University. After working on various magazines, she has been working freelance since 2000. Having always done a lot of sport when growing up, Linda says she only got into running at the age of 24.

“I’d just got back from overseas, and let’s just say I’d eaten too many pork pies, so needed to do something radical. My boyfriend was a runner, and he got me into it. Hell, it was hard, but I went from 5km to 12km, and was told that if I can do 12, I can do 21.” A first marathon followed a few months later, then came Two Oceans the following year, and then Comrades a year after that. “I’ve done 15 consecutive Oceans, but last year I realised I’m just no longer enjoying it, so this year I will be a supporter – but I’ll probably be back after that.”

“I must confess, I was a roadie for 10 years, but I saw the light in 2004 when I moved to Cape Town and found trail running. I never thought I could love anything more than road running, but now I find it hard to understand why I loved it so much.” She does admit to still having a few road goals, though. “My marathon PB is 3:16, so I would love to do a sub-3:00.”

She also wants to run her 10th Comrades. “2009 was going to be my 10th, and my training was going well until I fell ill due to a bug which I think I picked up in India while running the Himalayan 100-miler the year before. I couldn’t run 3km without a stop in the bushes, and had to undergo a colonoscopy, then take antibiotics that nuked the parasite! I entered Comrades again in 2010, but then Ryan called about the Trans-Alps, and this year I’ve got the Namib Challenge and won’t be recovered in time. My best Comrades time so far was 8:07, and I wasn’t even properly trained, so I would like my 10th to be a silver.”

THE TUFFER PUFFER
Having taken up trail running in 2004, Linda lined up for the Puffer, an 80km trail run from Cape Point to the Cape Town Waterfront, running along the spine of the Peninsula mountains. “I was still quite new to trail running and my time was pretty shocking, something like 11 hours. Then I got involved in Ironman for a few years, and it was actually the knowledge that I could do Ironman, and the Comrades, that convinced me I could do longer distances, so I thought, let’s try the Tougher Puffer.” So in 2006 she lined up for the back-to-back double running of the Puffer route, starting the day before the main race, and she not only won the women’s race and equalled the women’s record, but she finished second overall.

“I absolutely loved it. I get energised running at night, but that’s also the hardest time, when energy reserves are low and your fuel tank is confused. Running constantly for 24 hours-plus really confuses your body. It’s hard to get your eating right. Inevitably, in the early hours of the morning, when trying to shove Gu’s in, your body just doesn’t want to know about it.”

Having equalled the record, to the minute – since the organisers apparently don’t worry about seconds – Linda decided to give it another go in 2007, and took 25 minutes off the record. “I swore to myself that I wouldn’t have to do it again if I beat the record, because it was so much harder that second time. My dad passed away very unexpectedly two weeks before the race, so I almost didn’t run.”

Linda’s Tuffer Puffer record has since been broken, so she says she is tempted to run it again, but it’s not high on her priority list. “Don’t tell my hubby, though,” she jokes. “Actually, I’m lucky not only to have a wonderful husband, but a running husband as well. He is so supportive of my training, dropping me off and picking me up for training runs, but still helps me keep my priorities focused, by showing me there’s more to life than running.”

MORE TRAIL SUCCESS
With the Tuffer Puffer behind her, Linda went on to run two Cape Odysseys in 2007 and 2008, both times being part of the winning women’s pairing, and finished sixth in the Mont Blanc Trail Marathon in France in 2008. She has also run six Hout Bay Trail Challenges, winning the women’s race in 2009, the same year that she won the Triple Trouble Trail Race (in a record time) and the Puffer, finished second woman in the Sky Run, and most remarkably, finished first overall in the Midnight Hell Run 50km, in an overall record time! Building on that success, she won the Midnight Hell Run 80km in 2010, again finishing first overall, and setting a new women’s record, then was part of the winning women’s pair in the AfricanX stage race, and took second place again in the Sky Run, to go with her Trans-Alpine success alongside Ryan.

“I just love South Africa’s trail races, and our calendar is becoming more and more packed, spanning the whole year – it’s no longer just built around the traditional road calendar. In fact, there are too many great races to choose from now, which is why I’ve never done the Bat Run, because it always clashes with the Midnight Hell Run, or the Three Peaks Challenge, which is too close to the Sky Run.”

DESERT SAND AND HEAT
At the time of writing, Linda was preparing for the Namib Desert Challenge, a five-day 220km self-sufficient race in the Namib Desert, starting on 27 March. Distances each day are between 40 and 50km, run in temperatures in the mid-40s, which is something Linda has never experienced before. “This will be my first race in real heat. Also, I’ve never done a self-sufficiency race before, so I’ve been training with a pack stuffed with towels, bottles of water and a 2kg beanbag weight, and I’ve been chafing like mad, but that’s good, because I’ve learnt what I need to protect.”

“This will undoubtedly be the hardest feat I’ve ever taken on, so I want to make the slog worthwhile. Therefore, I’ve chosen to run in support of a cause that’s close to my heart. Solomon’s Haven is an emergency shelter in Mitchell’s Plain, Cape Town, which is home to children who have been abused, neglected or abandoned by their families. So here’s the deal: I’ll do the sweaty work and slog across the desert, and people click on the DONATE NOW link at the top of my backabuddy.co.za page! Solomon’s Haven needs all the help you and I can give it.”

ON THE HORISON
After the Namib race, Linda will be looking for more trails to explore. For starters, just before our interview, she received word that her first ever entry for the Otter Trail Marathon had been accepted. She also said she wants to give the Sky Run another try. “I’ve finished second twice, so I really want to win it. Of course, I would never turn down an offer to run overseas, but there’s no reason to look elsewhere, because we have such fantastic races here.”

SUPPORT LINDA’S DESERT RUN
You can make a much-needed donation towards Solomon’s Haven at www.backabuddy.co.za/champion/project/backabuddynamiblinda .