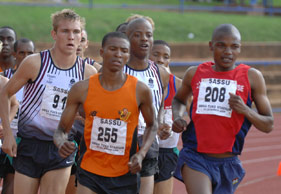 In name, the University of Johannesburg (UJ) might only be six years old, but this does not mean it should not be taken seriously on the athletics track. Since the establishment of UJ in 2005, it has produced quality results at every University Sports South Africa (USSA) national championships, finishing in the top three every year and winning twice.

Before the 2005 merging of the Rand Afrikaans University (RAU) and the Technikon Witwatersrand (TWR), some of the country’s greatest road and track athletes strutted their stuff for these institutions, such as Francois Fouche, Tom Petranoff, Estie Wittstock, Arnaud Malherbe, Sibusiso Sishi, Poppy Mlambo, Ren? Kalmer, Juan van Deventer, Ruben Ramolefi and Mbulaeni Mulaudzi. The merger therefore saw two already strong athletics clubs joining forces, not only boasting current international athletes, but also new, exciting talent that has since been identified and developed.

At the moment there are almost 200 members in the UJ club, and the club has an impressive number of provincial representatives. At last year’s SA Youth and Junior Championships, 33 members of the Central Gauteng (CGA) track and field team hailed from UJ, and 18 of them finished on the podium. At the SA Senior Championships, 51 CGA athletes were from UJ, and 19 of them medalled, which is something that the club is especially proud of. UJ can also boast having a number of current national champs in their respective events, including Ashleigh Schnetler (junior 3000m steeplechase), Kelly Kingwell (junior triple jump), Apelele Rasmeni (junior triple jump), Bianca van Rooyen (senior shot put) and Calvin-Lee Maelangwe (senior high jump).

FACILITIES
Since the merger in 2005, UJ has become one of the largest residential universities in the country, with nine faculties spread over four campuses in the greater Johannesburg area. Two are situated in Auckland Park, one in Doornfontein, and there is a brand new campus in Soweto. The main athletics track at the Auckland Park campus was upgraded in 2009, getting a striking blue and gold synthetic track, and together with a similar brand new track in Soweto, UJ can now boast having two of only three IAAF-accredited tracks in the country. This means they are part of a select group of stadiums certified for international competition.

Being the largest high performance track and field athletics club in Central Gauteng, and also one of the strongest, UJ needs a lot of room for all its athletes. Thabiso Moletsane, manager of the athletics club, says the main track at the Auckland Park campus is pretty crowded at the moment, but more and more athletes are making use of the facilities at Soweto, as well as the track at the Johannesburg Stadium. “It is a little difficult to have more athletes train at Soweto and at Johannesburg, because most of them are based in Auckland Park, and it’s convenient to train here, but we have some athletes who prefer Soweto, and the facilities there don’t have to stand back for any other stadium in the country.”

Being a member of the UJ club gives the athletes full access to any one of these world-class tracks to do their training, and there are also world-class coaches on hand to help them develop. Les Archer (200m and 400m), Johan Furstenburg (100m and 200m) and Stephan Lindeque (sprints and hurdles) are in charge of the sprinters, while JP van der Merwe, JJ Smith and Hans Seastad are in charge of the middle and long distance athletes, and Carl Meyer keeps a close eye on the walkers. All the coaches have enjoyed immense success with their athletes and are well known on the South African athletics scene.

GOALS FOR 2011
According to Thabiso, the club’s main goal for the 2011 season is to have as many of its athletes as possible qualify for the World Student Games in Shenzen, China, in August. However, before that the UJ athletes will be lining up at the USSA Champs in Stellenbosch in April to try take back the title after they hit a bit of a speed bump last year and could only manage third place. Thabiso is optimistic about their chances, and says Ashleigh Schnetler (1500m and 3000m SC), Anelda Pypers (800m and 1500m), Nolene Conrad (3000m SC and 5000m), Waide Jooste (100m and 200m), Mandie Brandt (800m and 1500m) and Tshamano Setone (1500m, 3000m and 5000m) are just some of the athletes that will be going for gold on the track, alongside their UJ team mates in the field events, and with their performances in 2010 they can’t be blamed for fancying their chances.

BRIGHT PROSPECTS
Ashleigh Schnetler is only 19 years old but has impressed in the almost two seasons she has been running for UJ. A middle distance track and cross-country athlete, Ashleigh won the gold medal in the 3000m steeplechase at last year’s junior national championships in a time of 11:07.4, and represented South Africa at the IAAF World Cross-country Championships in Poland.

Another rising star is discus thrower Dewald van Heerden, who represented South Africa at the IAAF World Junior Championships in Moncton, Canada. Meanwhile, some promising new recruits include Prince Makgato (100m and 200m), Armin Botha (3000m and 5000m) on the track, and Allanah Crafford and Donovan Stebbing (hammer throw and shot put) in the field.