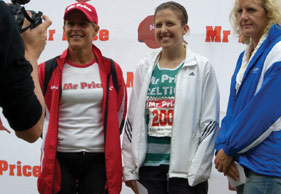 Running has always been in Kim Laxton’s genes: Her mother, Sonja, is one of South Africa’s living legends, while her father Ian is a well known running commentator, and Kim has been running since she can remember! Over the years she has won many prestigious road races, often representing Gauteng at the SA Champs. Today Kim is a busy young doctor and though she doesn’t find much time for competing, she still makes time to do what she loves best.

What is your background and how did you get involved in the medical field?
I studied Medicine at Wits University. I then did two years of internship at Victoria Hospital in Cape Town. In 2009 I did my Community Service year at Themba Hospital just outside White River, and in 2010 I worked in emergency medicine in Nelspruit. This year I am employed by the Johannesburg Hospital and serve as a medical officer in cardiology.

Why are you so passionate about medicine?
I have always enjoyed the field of science and find the human body fascinating. Medicine has provided me with the opportunity to interact with many different people and to travel throughout the country. My work can be physically and emotionally draining, but until one has seen one’s own success in another’s eye, one really has no idea what it means to ‘help’ another.

What has been the highlight of your career?
I believe my best and most vivid moment was performing a Caesarian section on a mother whose baby was premature. The baby weighed 880g and both mother and baby survived the operation. However, the times I treasure most were when I prayed with mothers who had lost their unborn babies to miscarriage.

And in running?
My greatest running moments have, in fact, not been in races. When I lived in White River, I loved running my club’s (Legogote Villagers) 6km time trial every Thursday. The Lowveld is beautiful and our time trial meandered through places laced with pink forests and silver lakes. The best part was hearing the Purple-crested Loerie. I have competed many times at the South African National Championships in cross-country and road. My highlight in running came in 2005 when I competed at the World 21.1km University Championships in Turkey and came 12th. My greatest achievement was, in fact, passing surgery two days after I arrived back from the games!

How did you get into running?
I started running about the time I started to walk. I was never pushed into running, and only when I started playing hockey in 1998 did I realise that training on the track would help my hockey! I then discovered I was far better at running. I will continue to run until I can’t walk.

How do you fit running into your busy life?
It is extremely difficult. Medicine drains one physically. We are required to work up to 36 hours at a go and by the time you stagger out of work, you are exhausted. I still set myself goals, though, and plan to fit in a certain number of training sessions during the week.

What does a day in your life look like?
There is no typical day, it’s more like a typical month, with at least four to five on-call (24-36hr) shifts, and one to two weekends dedicated to the hospital. My days consist of running around the wards, resuscitating if need be. Sometime during that month I will fall over from exhaustion, and other times will be spent running hard on the tar to work off frustration. It’s no routine, it’s often not fun, but it is well worth the effort.

What is the biggest obstacle to your running?
There simply isn’t enough time – that can’t be purchased at a running shop.

Who do you run with?
I run alone, usually with an ipod.

Do you run a lot of races?
I used to run a road race every two to three weekends. This year has been very difficult to train properly and I usually don’t race if I am unfit. But when my job becomes more routine, the training will increase and the road races more regularly frequented!

Where is your favourite place to run?
White River! I had a 20km route that went around a large dam just outside town. I chose the early mornings and late evenings to run this route – for classic sunrises and sunsets.

How has running influenced your work ethic?
Running keeps me focused and dedicated. It gives me a chance to escape from stress and pressure, and has played an integral part in where I choose to practise medicine!

Why do you enjoy running?
Because I can do it! I enjoy the competitiveness and achievement when I have set goals and worked towards them.

What is the best advice you have been given with regards to running?
Relax and enjoy what you do. If a race is going badly, don’t fight it, get to the end and enjoy an extra long bath. The worst advice was to drink fizzy cool-drinks whilst you are running!

What is the first thing you like to do after a run?
Say hi to my cat. She stands at the garage door waiting for me. And she never complains if I’m sweaty, she’s just glad I’m home.

What is your greatest ambition in running?
To find the most beautiful parts of this country and run in them.

Who are your running role models?
Every year I am in awe of every single person who crosses the finishing line of the Comrades Marathon. For about five minutes after the final gun, I plan to at least try this great event the following year, but then I see everyone hobbling the next day and I change my mind.

What piece of running equipment could you not do without?
My running shoes! I have tender soles and I simply could not run barefoot.

Has your family played an important role in your sporting life?
Yes, because running is a central topic on a daily basis. My mum has competed forever and my dad never stops talking about the sport.

What would you say to someone who says they don’t have time to exercise?
There is always time. If you can’t go to the gym, take the stairs instead of the lift. It won’t make you finish Comrades, but if you’re unfit it will certainly give you some lactic acid in your legs.

What are your future running plans?
My future is uncertain on all levels. I plan to remain fit, compete when I can and simply enjoy what I do. I will forever involve myself with the sport, be it commentary or advice to youngsters. As all runners know, once the running bug has bitten, one is infected for life!