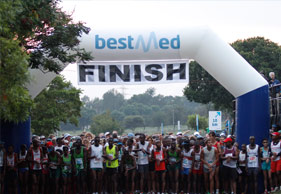 The 2011 running of the Tuks Half and its accompanying races was coupled with the launch of a new major three-year race sponsorship from Bestmed, and the attractive prize money that went hand-in-hand with the new sponsorship certainly helped to attract more elite runners. Added to this, the promise of doubled prize money for any new course records saw the top runners all going out to break those records – with great success. In the two main events, three out of four records were broken, thanks to some quality running.

In the women’s half marathon, Mamorolla Tjoka from Lesotho doubled her prize money of R5000 by breaking the course record, and beating the pre-race favourite Irvette van Blerk, in a time of 1:14:25. She smashed the previous record by a massive two minutes and 56 seconds. The men’s winner in the half was 2009 South African cross-country champion Sibusiso Nzima, who crossed the line in a time of 1:05:56, only missing out on the record and incentive by 49 seconds.

The 10km records had no chance of standing as Stephen Mokoka and Zimbabwean Rutendo Nyahora broke the men’s and woman’s records respectively. Stephen took five seconds off the previous record, clocking 29:32, while Rutendo finished in 35:02, going 37 seconds faster than the previous mark.

The 5km and 1km fun-run events also proved to be very popular, with loads of toddlers, children and adults taking part and earning themselves a T-shirt and medal, and ensuring everyone went home happy.

Chairperson of the Tuks Marathon Club, Prof Vollie Spies, said they are extremely happy with the outcome of race day and look forward to working with Bestmed in future and to making this the biggest half marathon in Northern Gauteng.