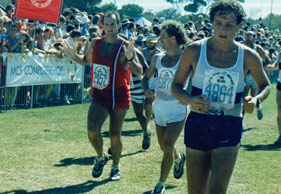 When you ask most runners their PBs, they can usually rattle them off without even blinking twice, and those who might have forgotten theirs can usually quickly refer back to logbooks they have kept over the years. But when it comes to training runs, not many runners can tell you exactly how far they ran or how they felt on each day of the week, month and year – for 25 years! Andre Berrange can. Ask him any date and he can tell you how far he ran, how long it took him, which route he chose, what the weather was like and how he felt on that day.

Paging through his three large scrapbooks is like paging through a special part of his life. Running is obviously one of his great passions and he has chosen to diligently record each run in a neat handwriting every day. In the early days of his running, he even pasted race numbers, pictures and other mementoes in the books, but as the years have gone by this has faded. His recording of his runs has certainly not faded!

VARSITY BLUES
Andre started running at university, where he studied architecture. “I started running as a means of countering stress in my final year exams. I was quite a diligent student and when I did not perform well at exams, I would actually go out on the road and punish myself with a hard run,” says Andre.

He kept running after varsity, but nothing serious – until June 1986. Andre was at the Bedfordview Country Club with a bunch of mates watching Comrades on TV. “That day everything changed and I decided I wanted to run Comrades. I started running three weeks later, training for my first Comrades in 1987.” That same day Andre started recording his training runs. His early recordings included remarks such as: ‘Tired, weak, frustrating, injury, tough course, slow…” But as time progressed the entries made way for remarks such as: ‘Good run, easy, incredible, excellent…’ He joined Germiston Callies Athletic Club in 1987 and today he is still a proud member, and the current chairman.

RUNNING JOURNEY
His first 15km was in Kempton Park, his first half marathon in Vanderbiljpark, and his first marathon in Benoni in 1987. “I finished in 3:43,” he says. Little did Andre know that was just the first many marathons – another 99 have followed that one into his logbooks!

In 1987 came his first Comrades, which he finished within five minutes of the 11-hour final gun. He also finished the next two very close to cut-off time. “Initially, I was hopeless at ultra distances, but I was so passionate about Comrades that I just did not want to give up. I must admit, after my first three Comrades Marathons, I thought maybe I should give up and not even bother.”

THEN SOMETHING CLICKED
Andre’s growing running and racing experience started leading to better Comrades times and he started finishing well within 10 hours. “My best time is 9:07. In those days the Bill Rowan medal was not around yet, so there wasn’t any real motivation to go under nine.”

He ran five Comrades Marathons in a row before taking a break, and ran the Big C intermittently the next few years. He attempted his green number run in 1999, but unfortunately it was not to be: A month before Comrades he picked up Hepatitis B, which only manifested as he was about to run the race. “I was so sick and had to bail.”

In 2002 Andre was back to claim his green number. “After that I stopped running Comrades, and I have to be honest, I don’t really have a desire to go back for more.” This has not kept him from being on the side of the road between Pietermaritzburg and Durban every year. “I am there every year to support and second my club mates.”

These days, Andre prefers to run the Two Oceans ultra, of which he has done 12, and he will be back in Cape Town in April to tackle his 13th voyage. “I love Two Oceans. Just when you start to suffer it stops and you can still party that night. I will try to do 20 and beyond if I am healthy enough.”

THE MAGICAL 100
One thing that will always stand out in his running career is his 100th marathon. He knew exactly that it was fast approaching and initially planned to run it at the New York City Marathon, or before his 50th birthday. Unfortunately things did not work out in such a way and he finished his 100th marathon at the recent Deloitte Pretoria Marathon.

“It was a great feeling! These days I still like to run a standard marathon in under four hours. I will always be running – it is part of my lifestyle. Running has kept me going through tough times at work and in my personal life. I love being part of it all.”

Andre is a proud member of Germiston Callies Athletic Club, the only club in the country that can boast having five Comrades Marathon winners in its club colours. Wally Hayward, Jackie Meckler, Mercer Davies, George Claassen and Alan Robb were all members of Callies when they won Comrades.

Therefore, the club hosts a race called the Callies Comrades Legends 32km & 15km each year. The first three races were run in honour of Wally, Jackie and Alan, while this year’s fourth race in the series, commemorating Mercer Davies, will be held on 10 April at the Germiston Stadium. Mercer won the Comrades in 1957 and won a total of five gold medals. For more info, contact 011 825 7701.